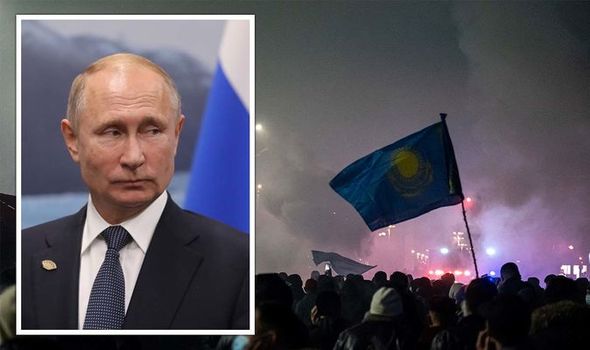 Stability seemed to be restored last night following the deployment of 2,500 Russian paratroopers led by battle-hardened airborne commander General Andrey Serdiukov, who spearheaded the invasion of Crimea in 2014.

Mass protests broke out a week ago following the doubling of the cost of liquefied petroleum gas (LPG), which many people in Kazakhstan use to fuel their cars.

President Kassym-Jomart Tokayev issued orders for troops to shoot to kill, and dozens have died.

Kazakhstan, the size of Western Europe, is Central Asia’s leading economy, generating per cent  of the region’s GDP, primarily through its oil and gas industry. It also has vast mineral resources.

Yet, despite Tokayev’s  claims that the unrest was the work of  ‘foreign-trained terrorists”, discontent has been increasing since 2019, when he took over from so-called ”father of the nation” Nursultan Nazarbayev who had ruled for almost 30 years following independence in 1991.

This is partly based on resentment that the 68-year-old represents the same party as Nazarbayev, and on the fact standards of living are not increasing for the majority, leading to protests every time vital subsidies are cut.

Any fears in Moscow of a Ukrainian-like Maiden revolution are unfounded due to any political opposite in Kazakhstan.

But last week’s unrest was also based on internal politics, with Tokayev taking advantage of the situation to shore up his own political position against rival networks led by former dictator Nursultan Nazarbayev, who still has much influence.

This included yesterday’s arrest for treason of his former intelligence chief Karim Massimov.

It is Vladimir Putin , however, who has come out on top.

This is partly based on resentment that the 68-year-old represents the same party as Nazarbayev, and on the fact standards of living are not increasing for the majority, leading to protests every time vital subsidies are cut.

Russian troops were called in as part of the first intervention by the so called  “Collective Security Treaty Organisation,” (CSTO) – a Moscow-led equivalent of Nato which includes Armenia, Belarus Kyrgyzstan and Tajikistan.

Ironically, Russia refrained from helping Armenia in its 2021 war against Azerbaijan.

US Secretary of State Anthony Blinken questioned the need for Russian intervention, warning: “One lesson of recent history is that once Russians are in your house, it’s sometimes very difficult to get them to leave”.

But Kazakhstan, once the heart of the Soviet space program, is now the base for Anti-Ballistic Missile testing and uranium mining operations vital to Russia’s nuclear industry.

As such it remains vitally important to the Kremlin.

“Putin needed to show that Russia is a regional guarantor of stability; a well-meaning actor who supports its allies.

“it’s as much a message for countries like Belarus and Armenia as it is for the West.

“It may not go as far as ‘USSR 2.0’ one hundred years on, but this intervention allowed Russia to show power projection. And that always comes with a price to pay.”