Navalny and his anti-corruption foundation have published a video in which they allege the opulent mansion belonged to the Russian leader. The video has been viewed more than 103 million times. 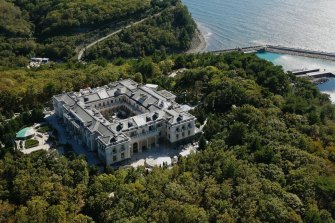 Rotenberg, Putin’s former judo sparring partner who sold his stake in gas pipeline construction firm Stroygazmontazh in 2019 for a sum which the RBC business daily put at 75 billion roubles ($1.3 billion), said on Saturday he bought the palace two years ago.

“Now it will no longer be a secret, I am the beneficiary,” Rotenberg said in a video published by the Mash Telegram channel. “There was a rather complicated facility, there were a lot of creditors, and I managed to become the beneficiary.“

He gave no further financial details of the purchase or how it had been funded. Putin has denied ownership of the palace.

Navalny was remanded in custody for 30 days on January 18 for alleged parole violations that he says were trumped up. He was arrested after flying back to Moscow from Germany where he had been recovering from a nerve agent poisoning last August.

Following his arrest thousands of people joined unsanctioned protests across Russia last Saturday to demand his release. Further protest rallies are planned across Russia on Sunday. The authorities have said the gatherings are illegal and have vowed to break them up.

On Saturday, Mediazona editor-in-chief Sergey Smirnov was released from police custody after being detained earlier in the day on suspicion of taking part in a protest in Moscow last weekend, the independent online media outlet said.

Smirnov faces a court hearing on February 3, the RIA news agency said. He could face up to 30 days in jail or a fine of up to 300,000 roubles or compulsory labour.

Rotenberg was among the Russian officials and business executives blacklisted by the United States and other Western powers in the aftermath of Russia’s annexation of Crimea in March 2014.