London: Prince Charles and Camilla, Duchess of Cornwall, have stepped in on only the second day of the Queen’s Platinum Jubilee festivities to represent the Queen, after she withdrew from the St Paul’s Cathedral Service of Thanksgiving, citing discomfort after her brief appearance on the Buckingham Palace balcony for Trooping the Colour.

The formal church service also marked the first public appearance together in England by Prince Harry and his wife Meghan, Duchess of Sussex, since the couple left for North America in March 2020 – although the pair visited the Queen privately in Windsor in April on their way to the Invictus Games in the Netherlands.

Palace fears that the Sussexes could distract from the celebrations by making unannounced public appearances or pronouncements have so far proved unfounded.

As the couple have stepped back from public duties and are now “non-working” royals, they did not appear in the carriage procession on Thursday or at the palace balcony. The couple gave no statements in their first 24 hours, and Meghan was only spotted by the press through the windows of the Major General’s Office during the festivities, playfully shushing Princess Anne’s grandchildren Savannah, 11, Isa, 10, Mia, 8 and Lena, 3.

A palace spokesman said the 96-year-old Queen had decided “with great reluctance” that she could no longer make the journey from her home at Windsor Castle to attend the service in central London.

Prince Harry and Meghan, Duchess of Sussex, arrive for a service of thanksgiving for the reign of Queen Elizabeth II at St Paul’s Cathedral in London on Friday.Credit:Matt Dunham

A spokesman said: “The Queen greatly enjoyed today’s Birthday Parade and Flypast but did experience some discomfort. Taking into account the journey and activity required to participate in tomorrow’s National Service of Thanksgiving at St Paul’s Cathedral, Her Majesty with great reluctance has concluded that she will not attend.”

Prince Andrew was also absent from the thanksgiving service, after he was diagnosed COVID positive during a routine test, and the Archbishop of Canterbury, Justin Welby, who is ill with both COVID and pneumonia.

Palace sources briefed the media that the Duke of York had seen the Queen in the last few days, but not since he tested positive.

The 62-year-old is now a non-working royal, after he settled a US lawsuit in February in which he was accused of sexually abusing an under-age girl. 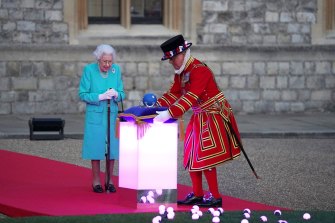 The Queen was able to start the lighting of the Principal Beacon from the Quadrangle at Windsor Castle. Credit:Getty

While the Queen could not attend the service and is no longer planning to attend the Epsom Derby, she was able to light the flame on Thursday evening at Windsor Castle for the beacon chain, comprising more than 3000 beacons across the UK and Commonwealth.

Flames were lit in capital cities across the commonwealth, from Canberra to Islamabad, Pakistan to Ottawa, Canada in the Queen’s honour, with the last beacon lit Friday afternoon AEST on Pitcairn Island, where the entire population – 35 permanent residents – turned up for the ceremony.

To mark the occasion the island’s generator, which powers all of Pitcairn and normally turns off at 9.15 pm local time, ran an extra hour or so to allow for more festivities.

Congratulations arrived from world leaders, including US President Joe Biden and Pope Francis. French President Emmanuel Macron called Elizabeth “the golden thread that binds our two countries” and former President Barack Obama recalled the queen’s “grace and generosity” during his first visit to the palace.

“Your life has been a gift, not just to the United Kingdom but to the world,” Obama told the BBC “May the light of your crown continue to reign supreme.”

Even North Korea’s leader Kim Jong Un congratulated the Queen, sending his first public message to her on Thursday.

“I extend my congratulations to you and your people on the occasion of the National Day of your country, the official birthday of Your Majesty,” North Korea’s Foreign Ministry said of the note that was sent Thursday from its 38-year-old leader.

On Saturday, the Queen is expected to spend time with Lilibet, the newest daughter of Harry and Meghan, who had not travelled to Britain with her parents since they quit their duties and moved to the United States two years ago.