Reckless Audi driver weaves in and out of traffic, undertaking cars as it veers across lanes on Scotland’s most dangerous road

A driving instructor has released dashcam footage of an ‘idiot’ racing his car through traffic in a bid to shame the motorist.

Road safety experts have slammed the frightening display of driving that had the potential to cause a very nasty collision, due in part to it being on one of Scotland’s busiest and most dangerous roads.

The Scottish driving instructor has released dash cam footage of the incident instead of reporting the driver to the police.

As the clip begins Stewart McNeill, owner of Trailer Training Glasgow, was heading eastbound on the M8 towards Anderston whilst towing a 1.5 ton box trailer when he witnessed the dangerous driving.

The driver of a black Audi A5 undertakes him on the left and immediately pulls in front of him to overtake a Ford Galaxy.

Seconds later he is seen to undertake a black cab before narrowly avoiding a collision with the taxi when merging directly from lane one to lane three.

Speaking today Mr McNeill, 68, from Erskine, said: ‘This idiot must have thought he was Lewis Hamilton on the race track as he did this fabulous bit of driving – the clip says it all.’ 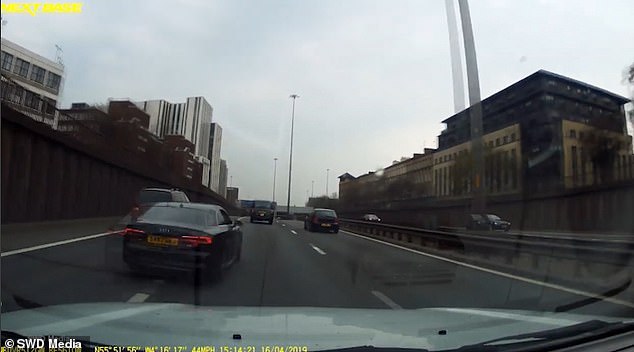 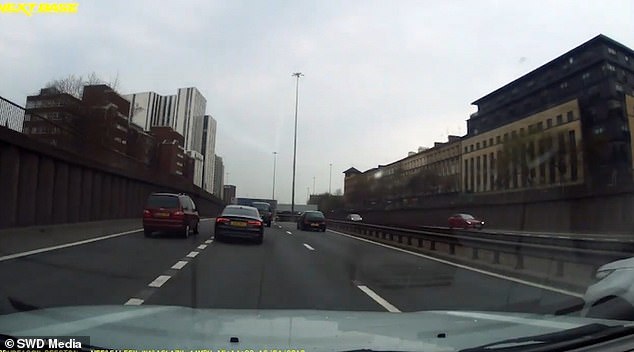 The Audi then spins out in front of Mr McNeill, appearing to turn so violently that the car is weighed down on one side

RAC spokesman Simon Williams said: ‘This is a frightening display of driving which shows complete disregard for everyone else on the road.

‘It would have taken just a slight change of speed or direction from the other vehicles for a potentially very nasty collision to have resulted.’

Latest figures released by the Department for Transport reveal that the M8 motorway, which connects Edinburgh and Glasgow, is the most dangerous road in Scotland. 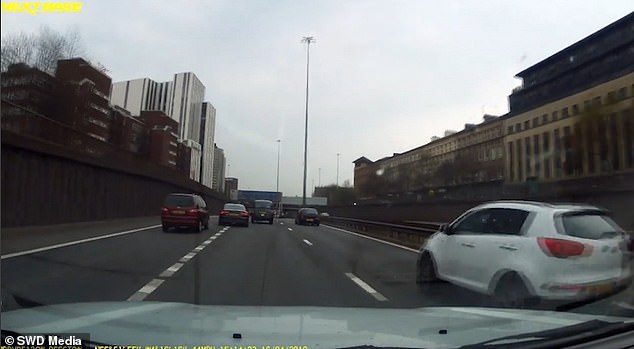 The clip was posted online with the caption ‘Another Audi Idiot’ and has been viewed over 8,600 times.

Sandip Ghuman said: ‘Charing Cross where all the accidents happen cause of d***s like them!’

Police Scotland were unable to comment as the incident had not been reported to them.