Competition from ride-hailing apps and unregistered drivers fuel anger among drivers, amid fears of organised crime. 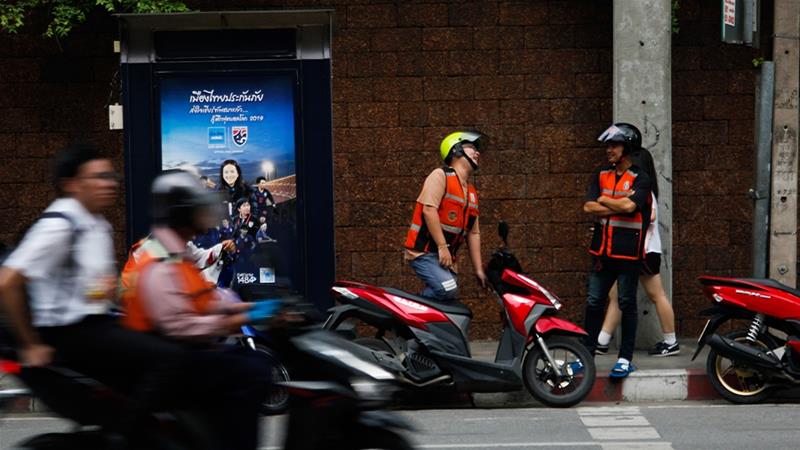 Bangkok, Thailand – Bangkok’s motorcycle-taxi drivers have long scraped a living helping harried residents get to their destinations through the Thai capital’s notorious traffic jams, but the growth of ride-hailing apps and proliferation of unregistered drivers is putting the industry under unprecedented pressure and contributing to violence.

Noom, a 50-something years old moto-taxi driver who prefers not to share his real name, says the situation in Udom Suk, the eastern central area where he has worked for the past 20 years, has become increasingly tense.

“It was just a matter of time before it turned violent,” he said, sheltering from the rain beneath an umbrella at a roadside noodle stall.

“Over the last two years, everything was mostly verbal, but it started to get worse. We all knew it was going to happen. It really was a ticking time bomb,” Noom told Al Jazeera.

Bangkok has an estimated 200,000 motorcycle-taxi drivers, or as locals call them, ‘win motosai’. Most are registered with the authorities, but an increasing number are not, and three weeks ago, in the middle of the morning, two teams of drivers near Noom’s station were caught up in a fighting.

The fight started small, but soon escalated into a brawl as men armed with swords, hammers, machetes, and even handguns took to the streets. By the end, dozens were in hospital and two men were dead.

Noom said the skirmish was all about territory as ride-sharing apps like Grab muscle in on ‘win motosai’ groups’ business and suspicions grow that criminal enterprises are once again getting involved in the motorcycle-taxi industry.

“The introduction of ride-sharing apps has further destabilised an already fragile equilibrium in the street economies of Bangkok,” said Claudio Sopranzetti, an Oxford researcher and author of ‘Owners of the Map’, a book focussing on the political and cultural importance of Bangkok’s ‘win’ drivers.

“Since the 2014 coup, motorcycle-taxi drivers had experienced a resurgence of illegal drivers and corrupt officers who meddle in their job demanding racket money. This has created two effects. The first, it stirred already existing tensions, and secondly, it fostered the creation of illegal driver groups – such as the ones that recently fought each other.”

Motorcycle-taxi drivers are an invaluable part of Bangkok life and for years citizens have found their service crucial if they are to get to meetings and appointments on time. 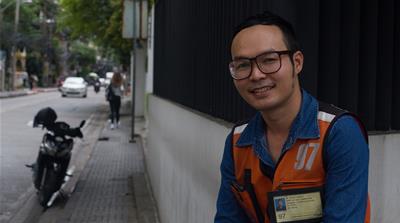 Generally, motorcycle-taxi drivers make around 800 baht ($26) a day, but many drivers say it’s becoming harder for them to carve out a living for themselves with all the extra competition.

On this occasion, one of the groups was allegedly operating illegally and becoming increasingly aggressive in touting for customers.

Noom and other moto-taxi drivers went to the police to complain about how the group was operating illegally, but it was only after the clash that the police dissolved the illegal ‘win’ group.

Siam Sungsunchart, 35, another registered ‘win’ manager who leads a group of drivers in Bangkok’s central Asok district, told us with pride that all his men were registered with Bangkok’s Department of Land Transport.

The department told Al Jazeera that all drivers must have registered licence plates (yellow plates), hold public transport licences and complete an official inspection before they can start a moto-taxi station.

They added that because Grab is considered a private transportation company, they have little legal oversight, but acknowledged that such apps are in conflict with the city’s regulations.

Despite that Sungsunchart says many drivers aren’t legally registered and he fears that in some parts of the city, mafia-like families may have returned to control “win” stations.

“There used to be families that controlled particular roads for generations,” Sungsunchart said. 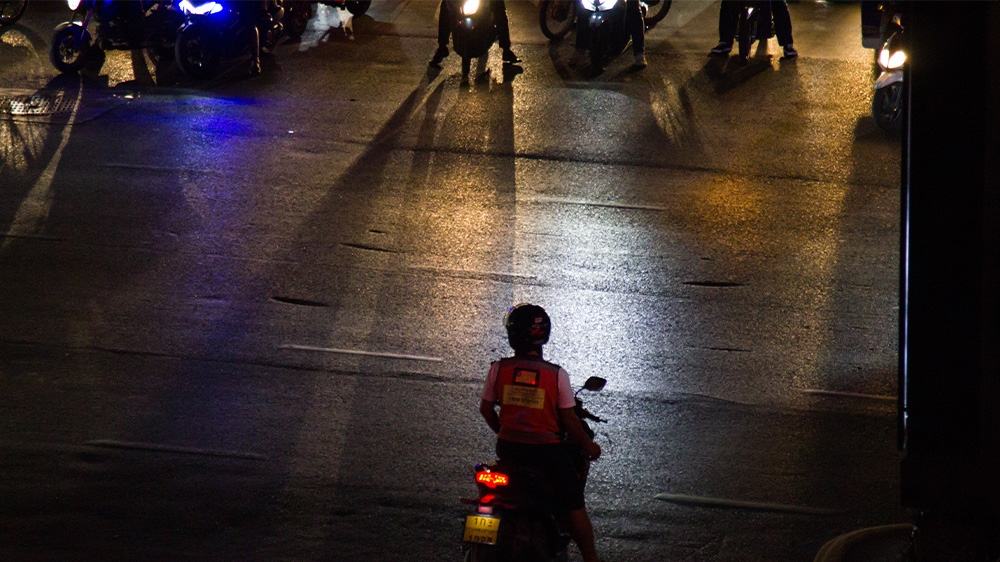 According to drivers throughout the city, mafia families controlled much of Bangkok’s moto-taxi businesses in the mid-2000s. But the government of Thaksin Shinawatra, the former prime minister who now lives in exile after being ousted in a military coup, initiated a campaign to rid the city of organised crime families.

“Many years ago, we would have to pay a ‘rental price’ to the local mafia,” Sungsunchart continued.

“They would literally just come and collect cash from each of us. But then Thaksin got rid of them and now you have to register with local authorities.”

It’s impossible to verify whether mafia families are operating in certain parts of the city, but after speaking to about a dozen other “win” drivers throughout Bangkok, Al Jazeera found that the majority believe it’s probable.

Back at Udom Suk, Noom said a local family used to control his station, but he said they were now controlling one of the two groups that clashed on the streets last month.

“The father started the business and now he has retired and passed it on to his son,” Noom said about the former owner of his station. “Everybody still knows this family, both the father and his son are powerful and everyone in the area still respect them. Back in the day, wearing a vest from this family was like wearing a protective halo. Because when we would wear them, we were also respected.”

But now, Noom says,  times have changed. He’s not interested in getting involved with groups that could give him any trouble, and he prefers to stay quiet, avoiding conflict whenever possible.

“Now we look after ourselves,” he said. “If someone from our win misbehaves, we have a peaceful sit-down with them. We are just trying to make a living without interfering with anyone. Violence is not really our thing.”