Melbourne is in the midst of a hotel-building boom with a swag of new hotels opening up across the city, even though the city’s existing hotels are only half full. 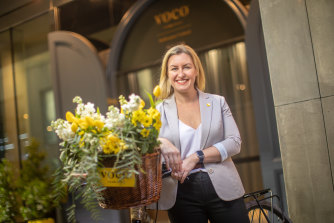 Celeste Clarke is the hotel operations manager at the 252-room Voco hotel, which opened last month next to Melbourne Central.

She said there was already strong demand from Melbourne guests taking a ‘staycation’, and she was confident corporate, interstate and international travellers would return.

“There’s obviously a lot of hotels opening up this year and next year as well,” she said. “Are they going to be full every day of the week? Possibly not, but it provides this incredible opportunity for people to come in and just enjoy different things while they’re here in Melbourne.”

The biggest challenge for Clarke has been staff shortages, but she said guests were understanding and happy to be able to stay at hotels again. 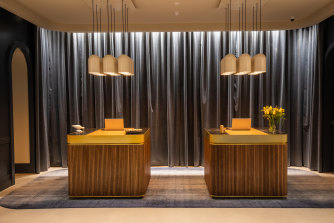 Inside the reception area of Voco hotel next to Melbourne Central. Credit:Scott McNaughton

“We’re adapting to what we need to do,” she said. “We’ve got our human resources manager stripping beds, we’ve got our financial controller parking cars; they’re just coming out of the offices and giving us a hand in the operations.”

The hotels opening this year are on top of a number of hotels that opened in the city during the pandemic, including the W Hotel, Lancemore Crossley St, Movenpick, Hilton Melbourne Little Queen Street and Next Hotel, while existing hotels upped the ante, such as the Sofitel which had a $15 million refurbishment.

Next Hotel manager David Ness said while it was not ideal to open between lockdowns, doing so enabled the boutique hotel to steadily build a client base.

He said the hotel had seen strong demand from local leisure travellers, but corporate clients were making a slower return.

“The consumer has shrunk and the offers have grown substantially, so there is a bit of an oversupply problem at the moment,” he said. “During COVID there were five or six new hotels that opened. But fortunately for us, we were the only ones at the ‘Paris’ end of Collins Street. At the Southern Cross end and the Docklands it is quite flooded.”

Girish Talreja, general manager at Marriott Docklands, which opened in November, said the $250 million hotel’s guests were mainly leisure travellers, but he hoped corporate and group travel would return.

“Especially after COVID, people are going to look at new builds,” Talreja said. “I think the way forward is the new hotels, and I am really lucky to have one.”

The growing numbers of hotels are fighting for a share of a depleted market, with the latest figures from Tourism Research Australia showing domestic overnight trips in Victoria were down 47 per cent from March 2020 to February 2022. 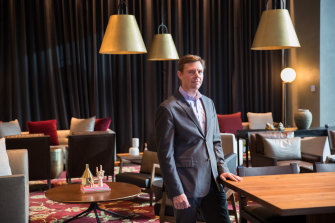 David Ness, general manager of Next Hotel which opened during the pandemic. Credit:Jason South

Melbourne Airport’s passenger numbers have slowly increased, from 1.2 million in January and 1.1 million in February to 1.7 million in March.

However, hotel rooms are yet to book out, with data from hospitality analytics company STR recording hotel occupancy in Melbourne for the year to April 2022 at 51.5 per cent. Before the pandemic in April 2019 it was at 77 per cent.

“The reason why so many hotels were being built was because returns were really good for hotels for 15 years. From GFC [Global Financial Crisis] to pre-COVID, hotel returns were incredible,” he said.

“Both Melbourne and Sydney were quite under-served for hotels, especially luxury hotels. There had barely been a luxury hotel built in either city for quite some time, for probably a decade,” he said.

Schwab is confident the travel sector will bounce back and the new hotels across Melbourne will steadily fill up. 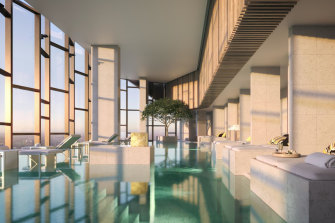 An artist’s drawing of what the swimming pool is expected to look like at Melbourne’s Ritz-Carlton hotel when it opens this year.

“I think supply, to an extent, creates demand,” he said. “Once you build the Ritz-Carlton, or a Four Seasons is coming in a few years time, that itself brings in customers.”

“Outside major events, there will be some amazing deals for both business and leisure travellers in the short- and medium-term,” he said. “The oversupply was expected pre-pandemic, and it’s been great to see the confidence of so many owners to not delay openings and open hotels.”

In need of some good news? The Greater Good newsletter delivers stories to your inbox to brighten your outlook. Sign up here.