A school has defended allowing children to take the knee in an anti-racism protest  at the start of its sports day today.

Pupils and staff at Noel-Baker Academy in Alvaston, Derby, are said to have suggested the idea after ‘experiencing and witnessing racially motivated abuse online’ in the community following the Euro 2020 final on July 11.

But one parent expressed concern over students feeling obligated to take part in the gesture due to ‘peer pressure’, while another believed they should have been notified beforehand.

Taking the knee has become a globalised symbol of fighting racism, initially gaining worldwide attention in American football with some players going down on one knee during the national anthem at the beginning of the game.

The act is now performed as part of the Black Lives Matter movement following the death of George Floyd while in police custody in Minneapolis in May last year. 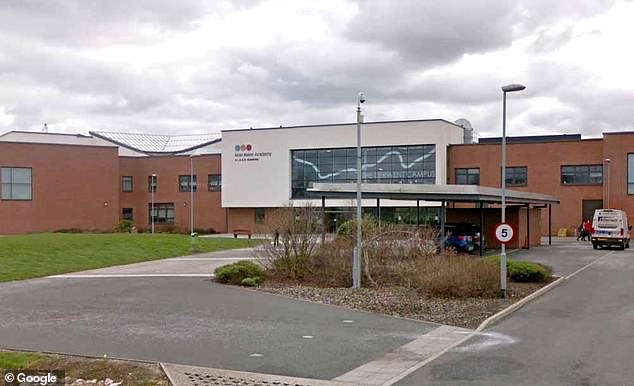 Pupils and staff at Noel-Baker Academy (pictured above) in Alvaston, Derby, are said to have suggested the idea after ‘experiencing and witnessing racially motivated abuse online’ in the community following the Euro 2020 final on July 11

A Noel-Baker Academy spokesman said: ‘Last week, following the Euro football final, a number of our children and staff experienced and witnessed racially motivated abuse online, in the community and targeted at sports players.

‘Following this, the school council requested that we do something to reinforce our stance against racism and make it clear that as a school community we are proudly anti-racist.

‘At the staff and students’ suggestion we have run a series of morning assemblies every day since, which have explored a range of issues around racism.

‘These culminated today in sports day, with students and staff being offered the opportunity to either link arms, put their hands on their heart, take the knee or simply take a minute’s silence to reflect on the beautiful diversity of our world and stand united against racism.

‘The choice of action or gesture was entirely free for students and staff alike to choose and was simply about standing united as one community against prejudice or discrimination.’

One parent who had voiced concerns, but did not wish to be named, said he did not feel it was right to encourage children, who may not have all the information to make a judgement, to make gestures on the subject.

The father added that he felt ‘peer pressure could make them take part even if they did not want to’.

Another parent said: ‘I think the school should have told us that this was happening and we could have made our own judgements on the situation.’ 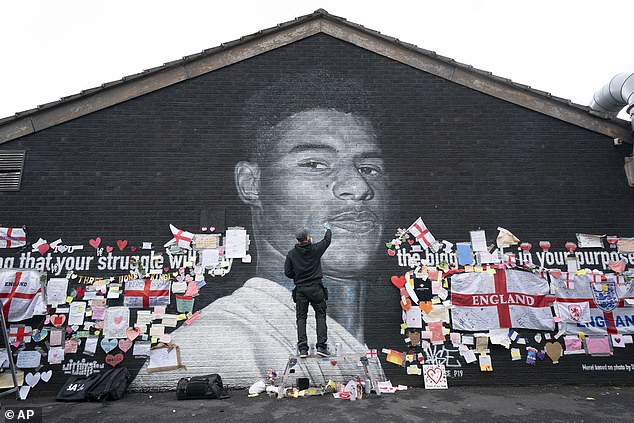 Local ward councillor Alan Graves Snr said that some parents told him they were given the impression children were not approached in the manner described by the school and that they had to join in.

He said: ‘The real issue here is the peer pressure youngsters would be put under to do something they might not agree with.

‘This in effect means they will be bullied by the very people they rely on to educate them. One has to ask the question as to why a school would suggest something that is divisive amongst pupils.

‘This amounts to indoctrination and advocates racism, something the school suggests it opposes.

‘It is one thing where adults make these choices but to put such pressure on children is not good for the society we all live in.’ 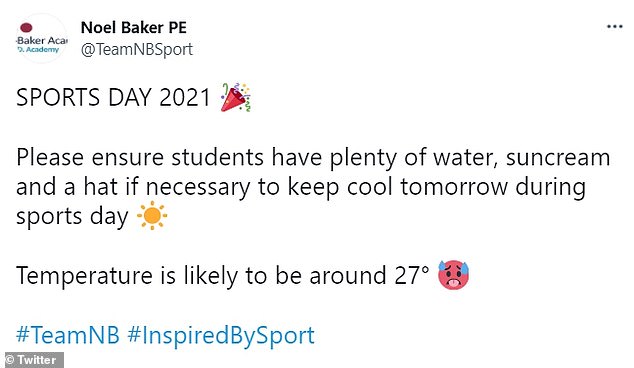 Ahead of Tuesday, the school’s PE department wrote online: ‘Please ensure students have plenty of water, sun cream and a hat if necessary to keep cool tomorrow during sports day’

Parents also wrote on social media that they were worried their children were being forced to take part in sports day while the temperatures have been so high this week, although others thought it was a good idea.

Ahead of Tuesday, the school’s PE department wrote online: ‘Please ensure students have plenty of water, sun cream and a hat if necessary to keep cool tomorrow during sports day.’

‘Temperature is likely to be around 27C.’

The school spokesman added: ‘After two years in which the Covid pandemic has meant that events like sports days have so cruelly been denied to our children, we were determined that we would provide the students with a fun-filled day of sports, laughter and ice cream.

‘In light of the weather, all parents have been asked to send their children with plenty of sunscreen, sun hats and refillable water bottles, we erected gazebos around the site for additional shade and had shaded areas for students to relax in when not taking part in the sports activities.’