Facebook has banned the sharing or viewing of our news articles on its platform. For independent journalism straight from the source, download our app and sign up to our newsletters.

Washington: Top officials responsible for security at the Capitol as it was overrun by a mob backing President Donald Trump on January 6 blamed wide-ranging intelligence failures for the deadly attack, pointing at a Senate hearing on Tuesday (Wednesday AEDT) to lapses that included a missed email warning of violence.

Testimony from three now-former officials – Capitol police chief Steven Sund, House sergeant-at-arms Paul Irving and Senate sergeant-at-arms Michael Stenger – each sought to minimise their responsibility for the events on that violent and chaotic day, which resulted in five deaths from injuries at the riot and temporarily delayed the congressional certification of President Joe Biden’s victory.

But they each, to varying degrees, detailed how they were caught off-guard by the scale and ferocity of the pro-Trump crowd, which escalated from a relatively peaceful protest to a violent mob in a span of hours while security officials scrambled to respond. 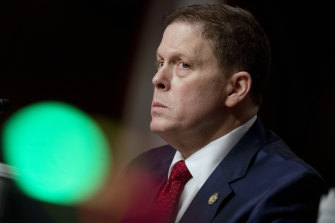 “None of the intelligence reflected what actually happened”: Former US Capitol Police Chief Steven Sund at the Senate inquiry, Tuesday February 23. Credit:AP

“None of the intelligence we received predicted what actually occurred,” Sund said at the hearing. “We properly planned for a mass demonstration with possible violence. What we got was a military-style, coordinated assault on my officers and a violent takeover of the Capitol building.”

The Senate investigation is one of several efforts to determine what went wrong on the day the rioters stormed the Capitol, the most serious breach of the building since British troops burned it in 1814. Federal prosecutors have filed cases against rioters, the Government Accountability Office is probing security preparations, and top congressional leaders continue to discuss creating an outside commission to investigate the attack, one modelled on the bipartisan 9/11 Commission.

On Tuesday, there were notable disputes between the witnesses – particularly between Sund and Irving over the timing and the nature of requests that Sund made for National Guard assistance in the days leading up to the attack and as it played out. 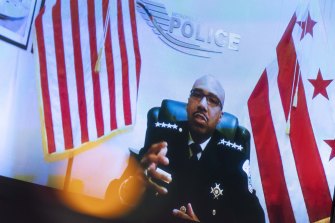 Washington’s acting police chief Ribert Contee asked why the FBI’s warning of a planned attack was sent as an ordinary email: “I assure you my phone is on 24 hours a day”. Credit:AP

Contee and Sund warned that the Capitol attack reflected a larger failure of domestic intelligence – one that did not take threats from homegrown extremists as seriously as those coming from other nations. Both did so in the context of explaining their handling of an intelligence bulletin issued by the FBI the day before the attack.

The report relayed credible calls for violence: “Stop calling this a march, or rally, or a protest,” said one of the messages. “Go there ready for war. We get our President or we die. NOTHING else will achieve this goal.”

Sund disclosed for the first time that the bulletin was forwarded to Capitol Police through the Joint Terrorism Task Force, but it only reached as far as the department’s intelligence division. It was not forwarded to Sund or to the two sergeants-at-arms.

Contee said the D.C. police department received the report but said it came as an undistinguished email, not as a priority alert demanding immediate attention.

“I would think that something of that nature would rise to the level of more than just an email,” he said. “I assure you that my phone is on 24 hours a day, seven days a week, and I’m available for any phone call from any agency that has information with respect to something of this magnitude happening in our city.”