Two self-made billionaire petrol tycoon brothers have agreed to buy Asda from Walmart for £6.8billion to bring the supermarket back under British control.

Mohsin Issa, 49, and his brother Zuber, 48, from Blackburn, stunned the City by being named as lead bidders to take over the retail giant alongside private equity firm TDR Capital, and concluded the deal today.

The new owners have committed to keeping the retailer’s headquarters in Leeds and has said it will invest to grow its convenience and online operations. Walmart will retain a minority stake in Asda as part of the agreement.

It is the latest stage in the brothers’ extraordinary rags to riches story, which saw them turn a single petrol station in Bury into an empire of 5,900 branches.

The brothers are now worth an estimated £3.56bn, including a £25m Kensington townhouse and a private jet that is kept in a hangar at Blackpool Airport alongside Donald Trump’s personal helicopter.

They are also building five identical mansions just three miles from the £115,000 Blackburn two-up two-down where they were raised. Mohsin is expected to live there with his wife, Shamim with whom he shares two grown-up children.

Today’s deal comes more than a year after a proposed merger between Asda and UK supermarket rival Sainsbury’s was torpedoed by regulators. 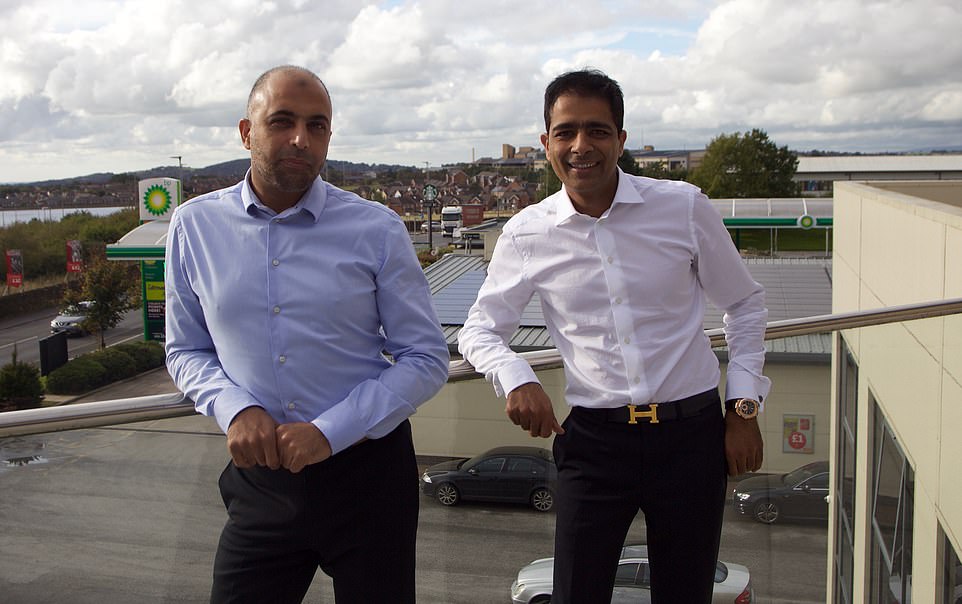 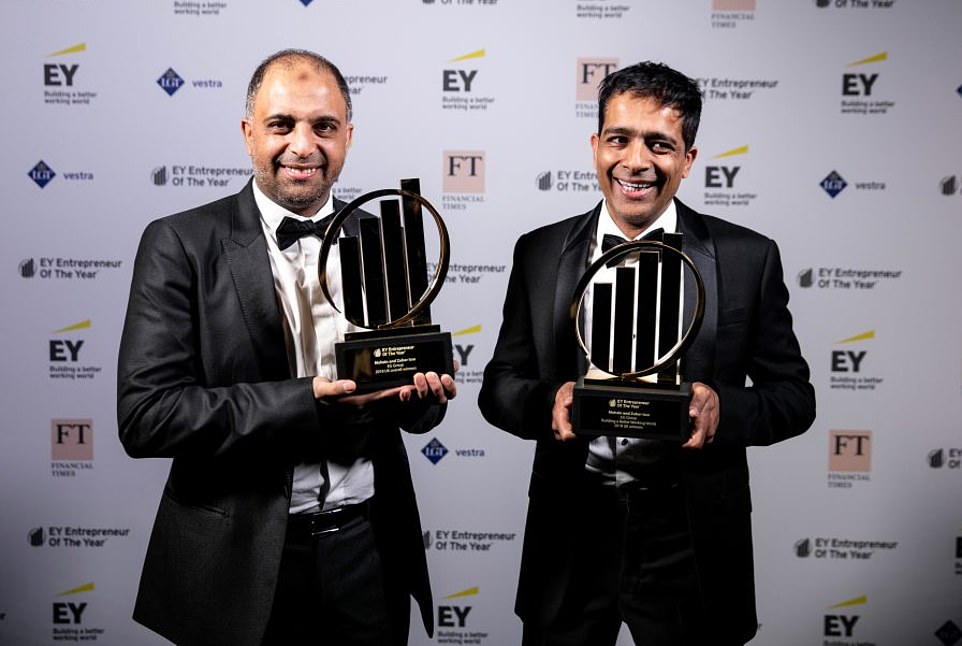 The brothers holding trophies at an awards ceremony in London in 2018, which saw them named EY Entrepreneur of the Year

1970s – Mohsin and Zuber Issa’s parents arrive to the UK from Gujurat, India and the brothers are born not long afterwards in Blackburn, Lancashire.

They work at their parents’ petrol station before it closes.

2018 – EG Group announces it will buy 800 Kroger convenience stores in he US before buying 1,200 sites in Italy from Esso. Later that year it buys 97 fuel stations in the Netherlands and 540 from the Australian retailer Woolworths.

As the children of immigrants who moved to Blackburn from Gujurat, India, in the 1970s, Mohsin and Zuber Issa – who were born in the former mill town – quickly learned the importance of hard work.

Their first experience of business was selling petrol from their parents’ filling station, where they would have their big idea that would revolutionise the industry and make their millions.

Petrol sales were in decline and fuel duty on the rise, cutting into already wafer-thin fuel margins and leading to hundreds of operators leaving the market.

At the time most garages – if they sold food at all – offered a measly selection of pre-packaged sandwiches, crisps, sweets and chocolate.

But the Issas realised fuel sales still had a purpose in creating a captive market at petrol stations, who could then be offered appetising food rather than the gruel offered elsewhere

The brothers struck franchise agreements with brands including Starbucks, Subway and KFC, before embarking on a buying spree to snap up sites that had previously become vacant.

They now own Europe’s largest forecourt operator, Euro Garages, which in 2019 reported revenues of more than £17.9bn.

The firm is now the largest Subway franchisee in Europe and earlier this year bought a group of 146 KFC stores.

Describing the secret of their success, Zuber told the Financial Times: ‘We wanted to create a destination where you could get fuel, food-to-go and shopping.

‘This is the formula and it works.

‘We were fortunate that the big players were leaving the market just as we were growing.’

TDR Capital – a London investment firm behind We Buy Any Car and David Lloyd gyms – bought a 50% stake in EG Group in 2015. The Issas retain the remaining 50%. 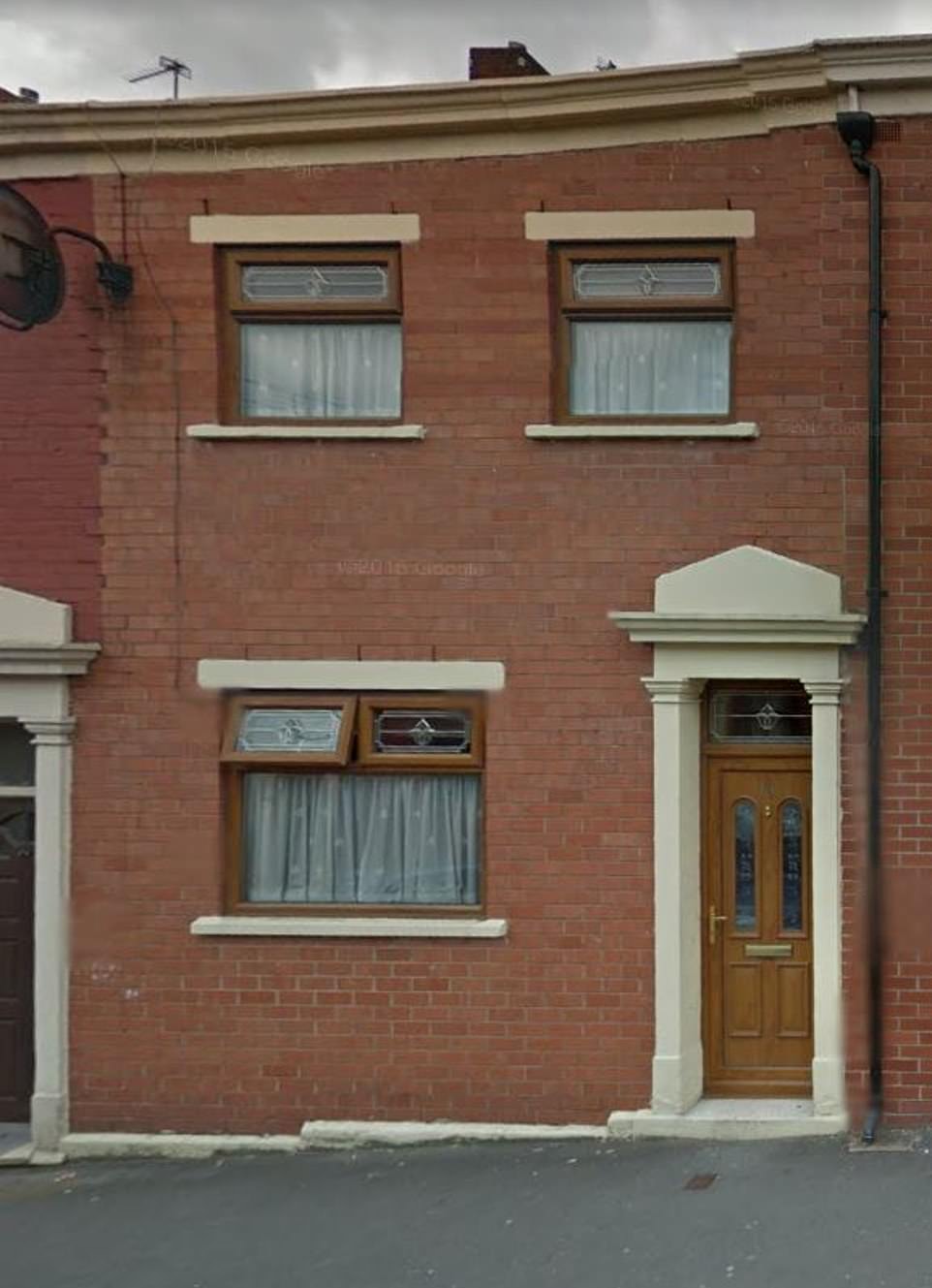 The £115,000 terraced house where the brothers grew up in Blackburn. They were born in the town after their parents moved from Gujurat, India 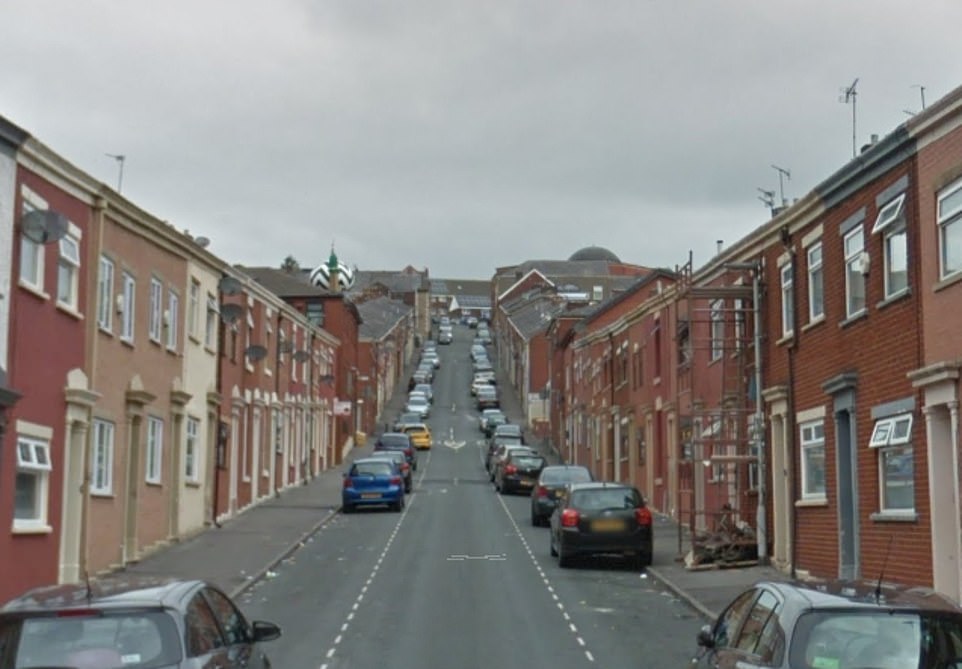 A wider view of the road in Blackburn where the brothers grew up. Their company is still based in the town 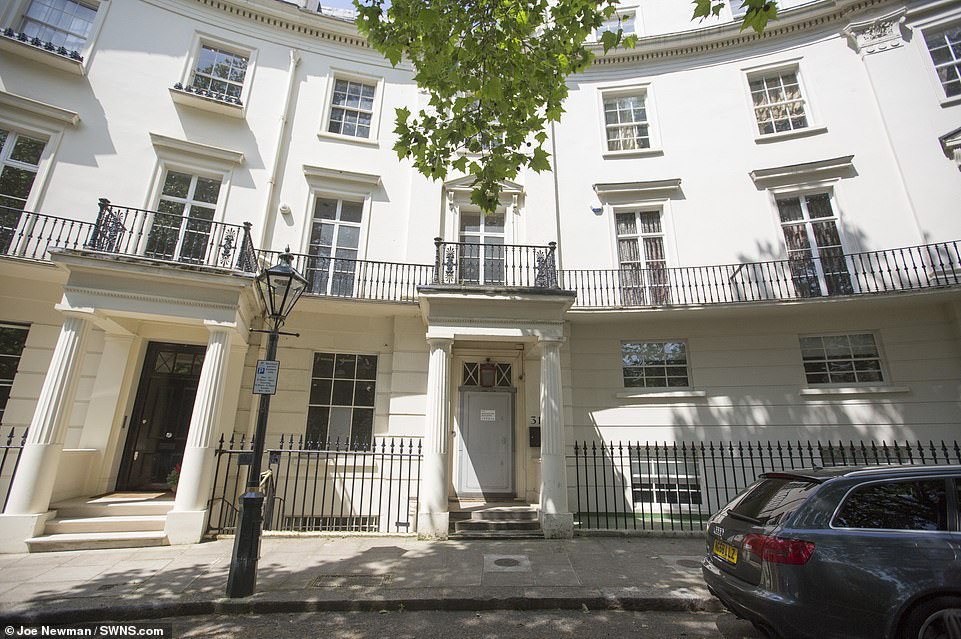 They are now worth an estimated £3.56bn, including a £25m Kensington townhouse (pictured) and a private jet that is kept in a hangar at Blackpool Airport alongside Donald Trump’s personal helicopter

1958: They travel to the USA to visit Piggly Wiggly, probably the world’s first supermarket. 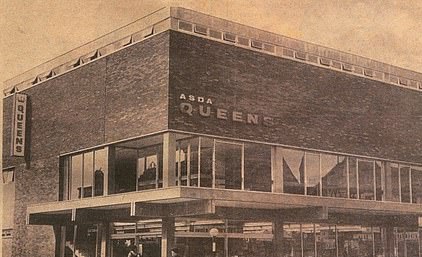 The first Asda supermarket, which was opened in 1965 in Wakefield, West Yorkshire

1965: Peter Asquith built his first new supermarket from scratch, next to a large car park, knowing that cars would change the way people shop. Associated Dairies were employed to run the in-store butchery operation and the name Asda was born by combining ASquith and DAiries. 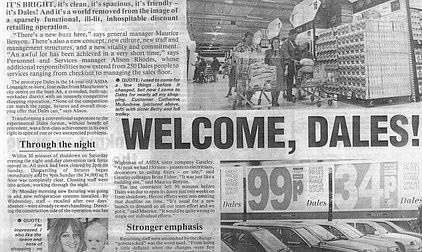 A newspaper article about one of the first ever Asda stores

This prompted a debt-fuelled buying spree that saw the brothers buy thousands of new sites and expand into eight other countries around the world.

‘If they had only 20 sites, they would have felt they had done their job.’

As proud Lancastrians, the brothers have insisted on keeping EG Group’s headquarters in Blackburn, and recently unveiled a new £35m headquarters.

‘People are always asking when we will move to London or Manchester,’ Zuber told the FT.

‘But the quality of life here is great. A lot of people do a few years in London then come to the North West.

‘They want to raise a family and have less pressure. We have got a lot of fantastic people that way.’

Mohsin has a wife Shamim, and their son and a daughter both work for EG.

Both brothers rarely give interviews and have adopted a low-key public profile.

Despite the fierce opposition, which saw the council face 30 letters of complaint, eight old houses have now been demolished and builders have laid foundations for the five 5,000 sq ft mansions.

Plans for the large houses, which are located on a quiet rural road outside Blackburn where houses sell for up to £1 million, were lodged in April 2018.

They sparked an uproar, with the properties described as ‘not in fitting with the local area’ as the homes stand over 4.5 metres taller with 1,500 square metres of floor space.

But planning permission was granted and pictures taken earlier this year showed builders had already moved in.

In 2017, the pair purchased a £25million mansion in Knightsbridge, which estate agents said could be worth £80million when planned renovations are carried out according to estate agents.

Their Grade II listed Georgian house is also at the centre of a long-running planning row.

The previous owner began digging a basement and left a vast 30ft-deep crater the size of two tennis courts, described by horrified neighbours to ‘Hitler’s bunker’.

When finished the luxury 22,000 sq ft home will have a huge underground car park, a swimming pool, spa, and cinema.

The brothers donate 2.5% of their earnings to charity through the Issa Foundation, which funds hospitals and provides free breakfasts for children in Lancashire.

They emerged as favourites to buy Asda last weekend, before the deal was concluded today. 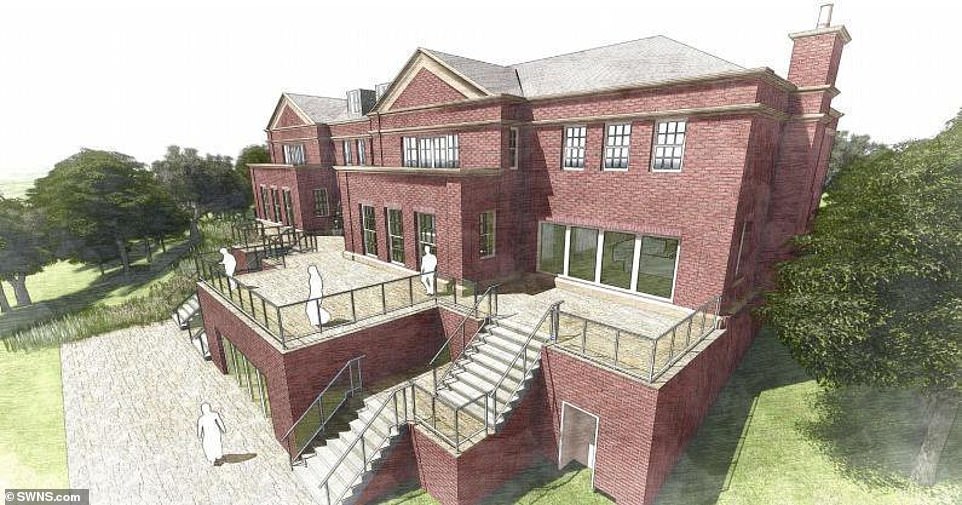 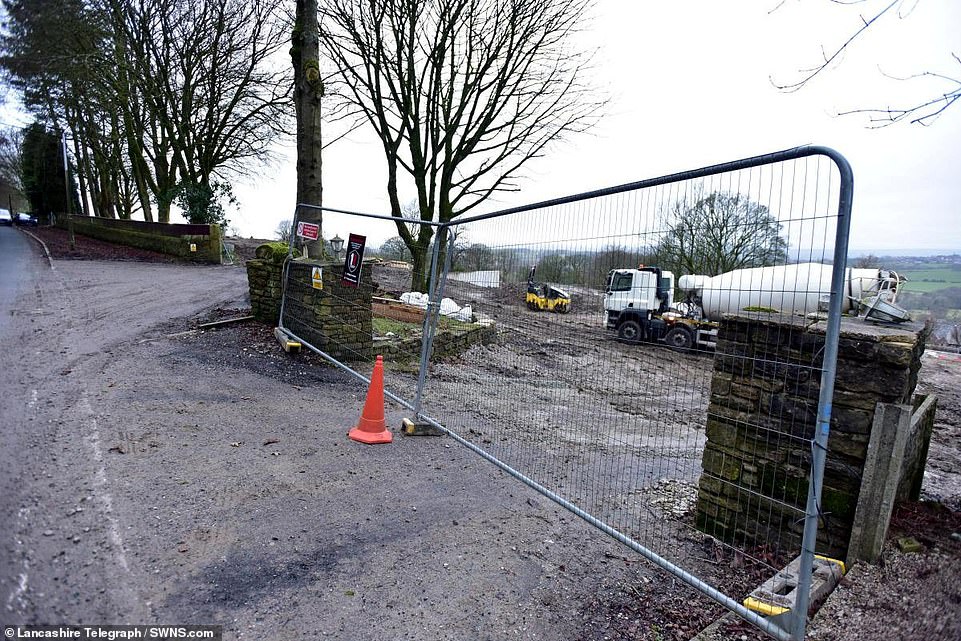 Plans for the large houses, which are located on a quiet rural road outside Blackburn where houses sell for up to £1 million, were lodged in April 2018. They are currently a building site 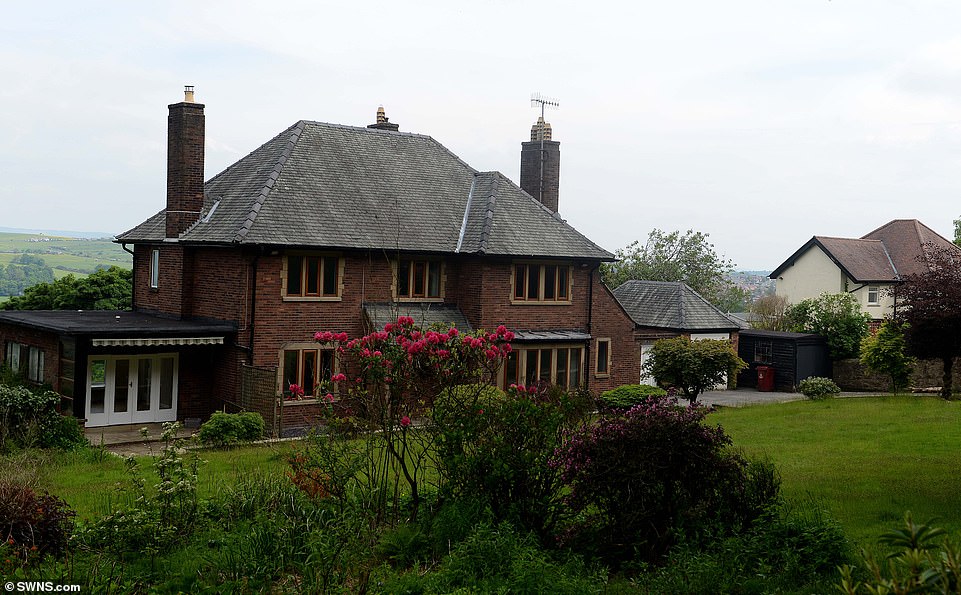 Pictured: The homes on Billinge End Road, Blackburn, Lancashire, that was demolished in order to make way for the new houses 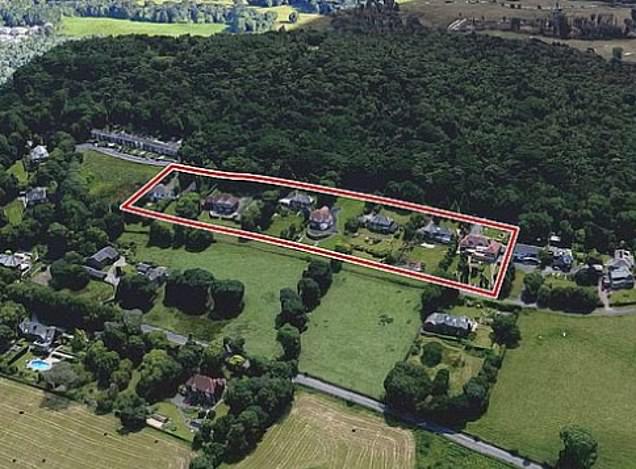 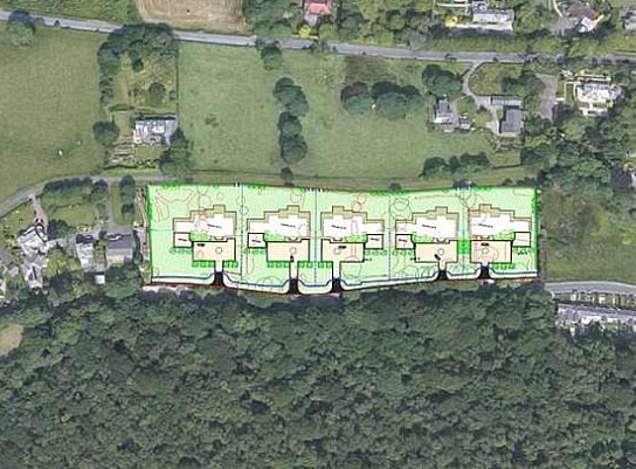 Despite the council being faced with 30 letters of complaint, the new buildings were given the green light. Pictured: The eight homes which were destroyed (left in red) and the new mansions which will be built (right in green)

Asda has seen its fortunes improve recently with trading strengthening through 2020, as shoppers have spent more money on groceries during the pandemic.

In the quarter to June, Asda saw online sales double but the new owners will be tasked with expanding its digital business further to take advantage of soaring demand and make ground on rivals, such as Tesco, who have a larger slice of the market.

The new owners will also face the challenge of keeping prices low amid tough economic conditions for shoppers and potential new tariffs on EU-imported foods, with the other big four supermarkets all announcing a raft of price cuts in recent months.

EG Group has sealed the deal after its offer was favoured by Walmart ahead of a move by US private equity firm Apollo.

Last week, a third bid from Lone Star Funds, fronted by former Asda executive Paul Mason, was dropped after failing to meet the price of its rivals during the latter stage of bidding.

Walmart sought a sale after the UK’s competition regulator blocked its merger with Sainsbury’s amid fears the move would push up prices and reduce product quality.

The US grocery started new discussions over a sale of Asda in February, but saw these halted due to disruption as a result of the coronavirus pandemic.

However, the auction process restarted in July as Walmart sought to exit the UK, 21 years after first purchasing the Leeds-based retailer.

The deal will have to pass through regulators, although it is expected to be given the green light. 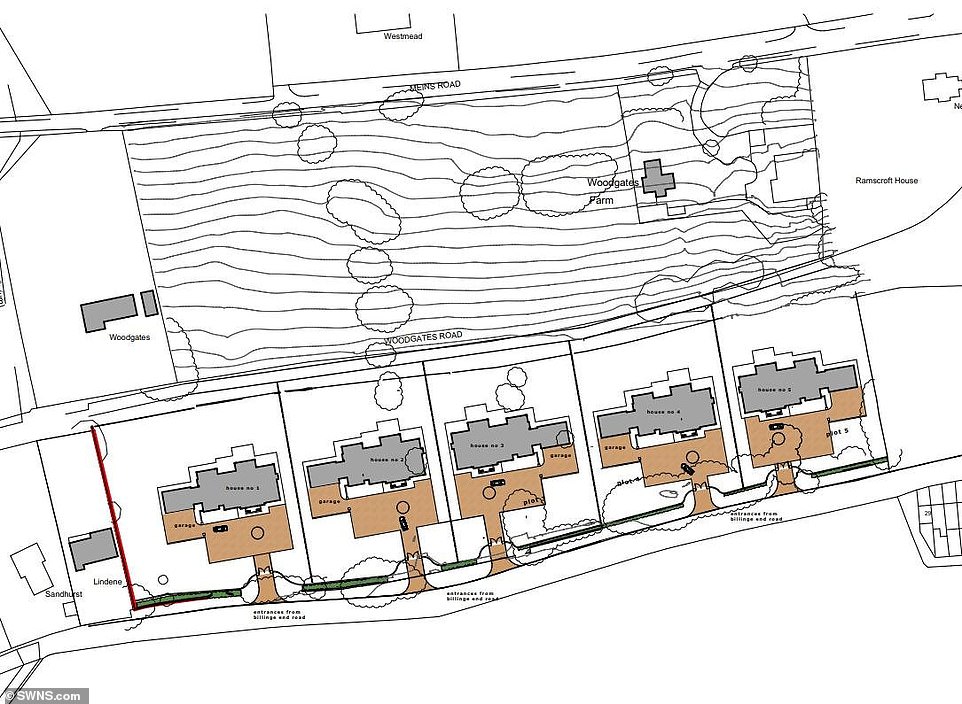 The five new homes will stand over over 4.5 metres taller that the old homes with 1,500 square metres of floor space 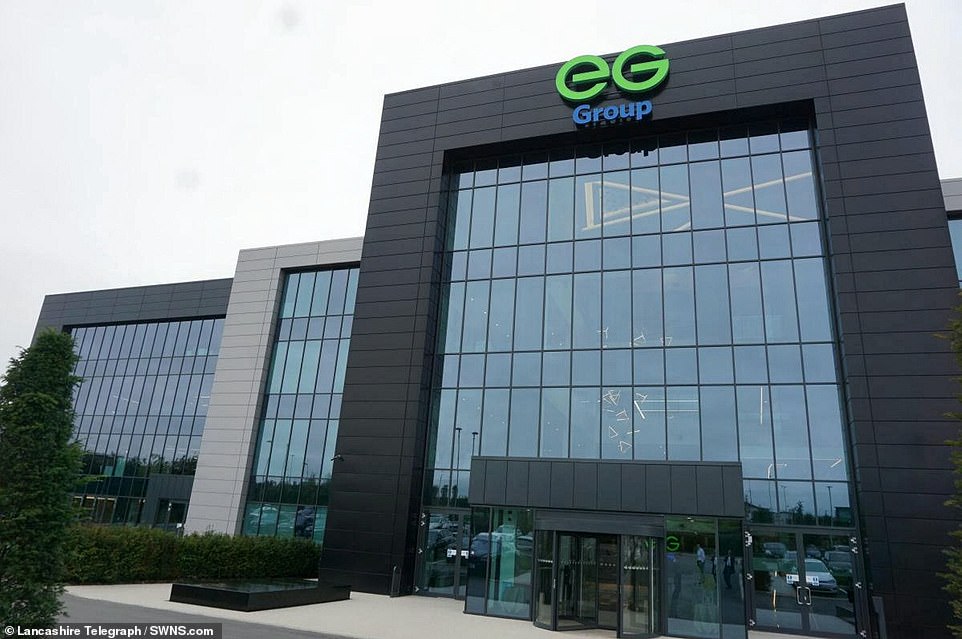 These new photos show the EG Group’s gargantuan new premises in Blackburn, Lancashire, where the Issa’s were born and raised 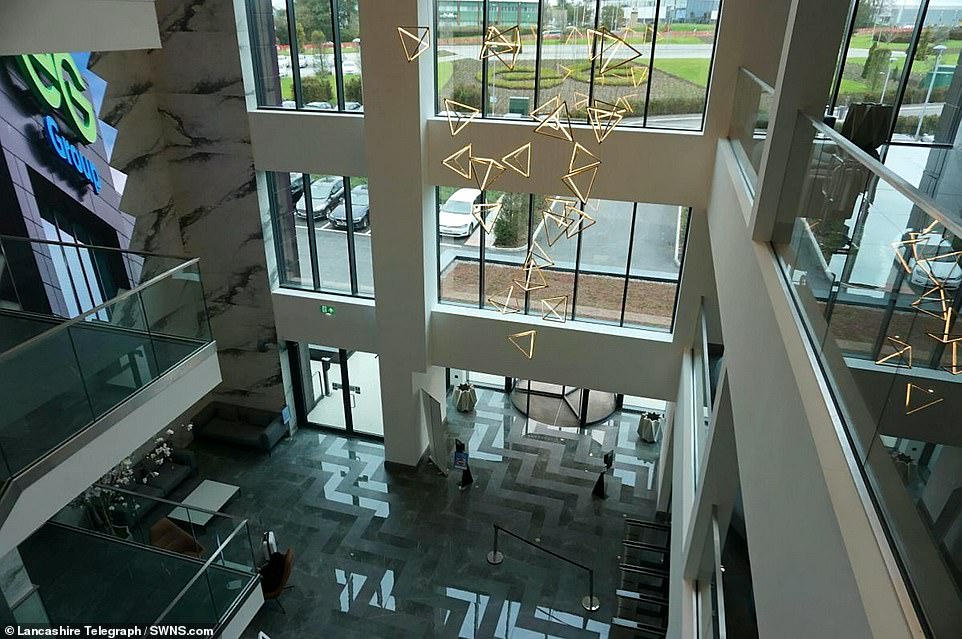 Building took three years and staff began working there in August, although due to current social distancing only half can be there at once