Newly released figures reveal that fourteen surviving families of the fire that killed 72 people are in temporary accommodation, with one family in hotel and two families in serviced apartments.

London landmarks including Kensington Palace, Downing Street as well as Grenfell Tower were bathed in a green projection light on Thursday night in tribute to the victims. 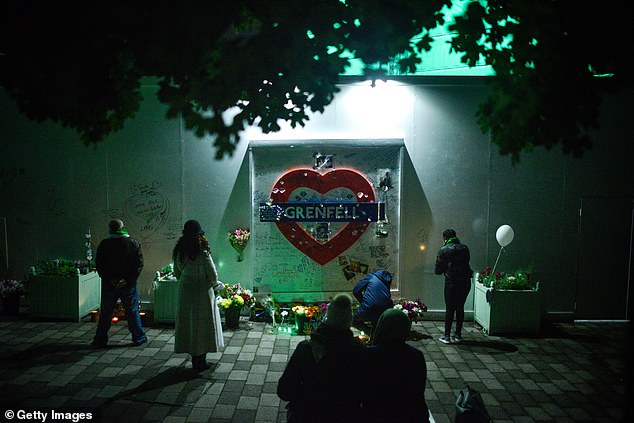 Survivors and bereaved families of Grenfell come together to remember those lost in the 2017 tower blaze.

They have organised projections on ‘unsafe’ high-rise blocks in London, Newcastle and Manchester with messages pushing for building improvements following the tragedy.

A projection on London’s Frinstead House, a 20-storey block across the road from Grenfell, claimed: ‘2 years after Grenfell this building still has no sprinklers #demandchange.

A message on Cruddas Park House, a 25-storey block in Newcastle, designated to over-50s, read: ‘2 years after Grenfell and the fire doors in this building still don’t work.’

While in Salford, Manchester, the projection on the 246-flat NV Building warns that ‘dangerous cladding’ still wrapped the outside of the structure.

Natasha Elcock, Grenfell survivor and co-chair of the Grenfell United campaign group, said: ‘We needed to send a strong message. It’s been two years since Grenfell and people are still going to bed at night worried that a fire like Grenfell could happen to them.

‘After the fire we were promised that blocks would be made safe. Two years later we cannot wait any longer, we need action now so everyone is safe in their homes.’ 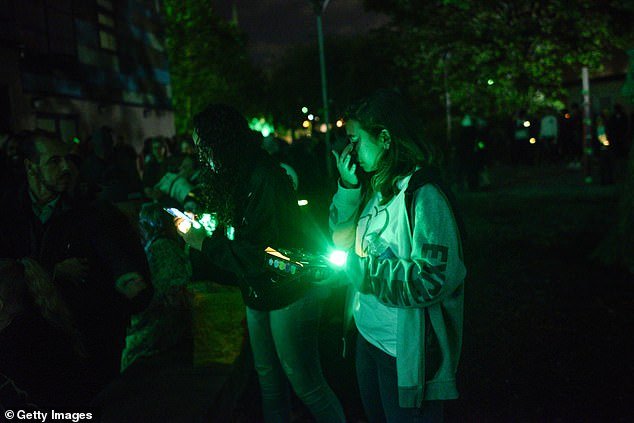 The tower blaze, that killed 72 people in June 2017, has been remembered at landmarks across London 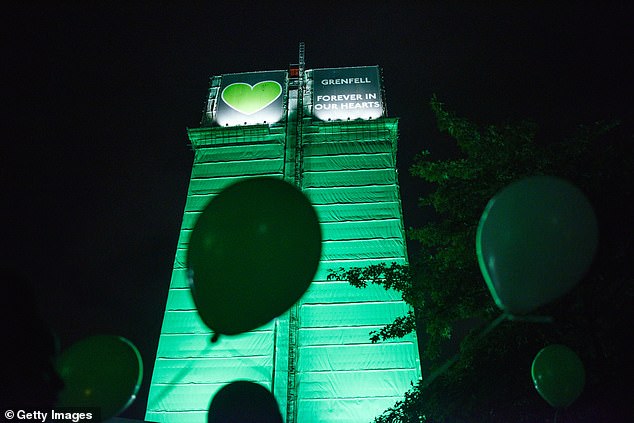 On Thursday night, balloons were also released at the tower’s memorial in remembrance of the 72 victims 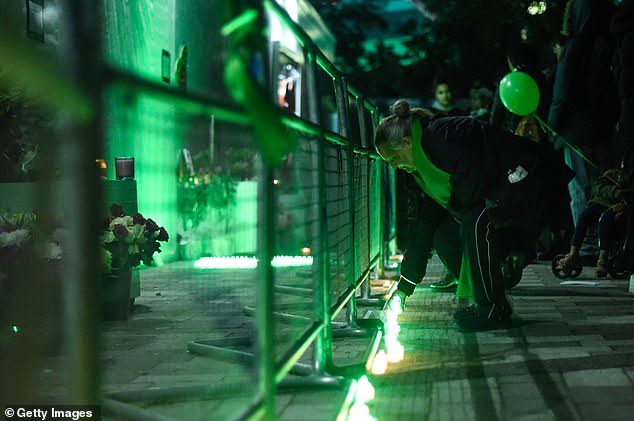 Some 328 buildings still have aluminium composite material (ACM) or similar cladding that was used on Grenfell Tower have yet to see removal works begin, it has been reported.

According to figures from the Building Safety Programme (BSP) obtained by the BBC, work has not yet begun to remove cladding from 221 of them.

As of the end of May, 105 other high-rise buildings that had previously failed safety tests have had work to remove the cladding completed.

The Ministry of Housing, Communities and Local Government told the BBC it has banned combustible materials in external walls of new high-rises and that sprinklers must be installed in new buildings above 30 metres.

‘Building owners are ultimately responsible for the safety of the building and it is for them to decide whether to retro-fit sprinklers.’

The BSP’s figures were reported after survivors and relatives of those killed in the blaze reiterated a call for urgent fire safety recommendations to be made, saying such a move ‘could save lives’. 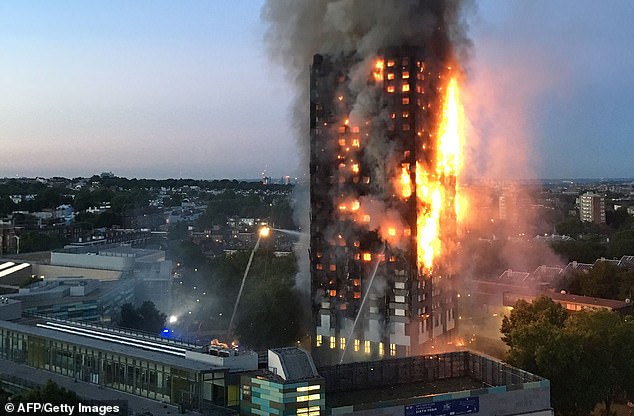 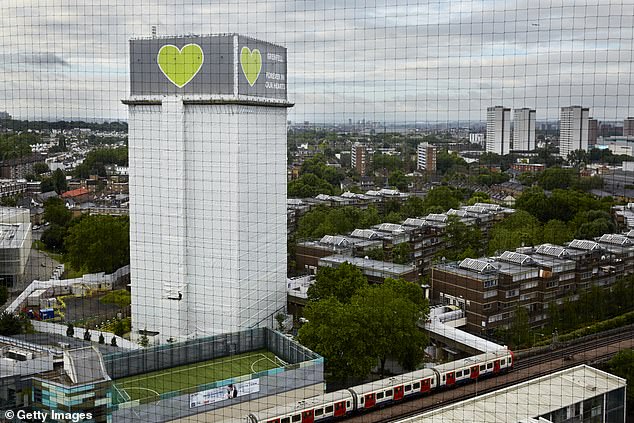 Survivors and bereaved families of Grenfell come together to remember those lost in the tower blaze (Grenfell Tower, 2019) 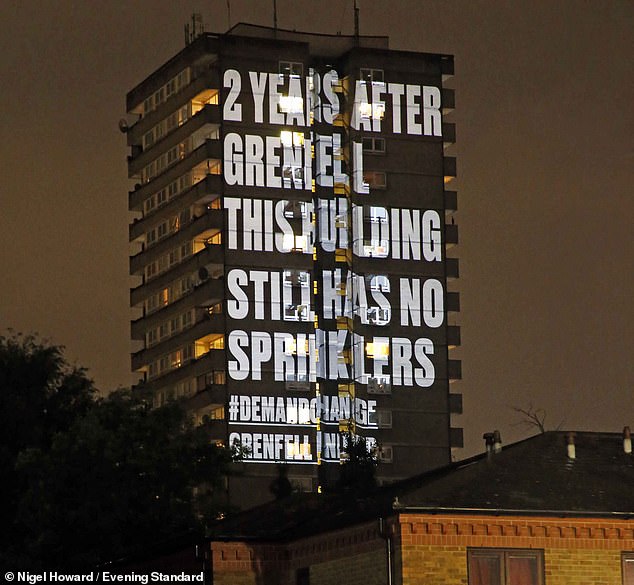 Grenfell survivors and bereaved families have organised projections on ‘unsafe’ high-rise blocks across Britain. A projection on west London’s Frinstead House (pictured), a block across the road from Grenfell, says: ‘2 years after Grenfell this building still has no sprinklers’

Balloons were also released at the tower’s memorial in remembrance of the 72 victims.

One – family still in a hotel

Unsafe cladding on buildings around the UK:

A memorial service will be held on Friday at St Helen’s Church in North Kensington, which will set the tone for a day of remembrance.

Britain’s Got Talent semi-finalist and Grenfell survivor Leanne Mya will sing during the service, which will also be attended by Communities Secretary James Brokenshire and fire minister Nick Hurd.

Yvette Williams, a co-ordinator of campaign group Justice 4 Grenfell, said there was an atmosphere of heaviness in the community following a series of setbacks, including the public inquiry’s first report being delayed and the news that any criminal charges will come after the probe has concluded.

She said: ‘For us the anniversary is always focused on the 72. So you kind of think, what have we really done for them over the last two years, how many steps towards justice have been made?’

She added: ‘I think foremost in people’s minds will be: 72 dead, still no arrests, how come?

‘And I think that people are seeing almost a two tier system. We have had prosecutions – we’ve had loads of them, and they’ve been the opportunists and fraudsters that said they lived in the tower and claimed public resources. 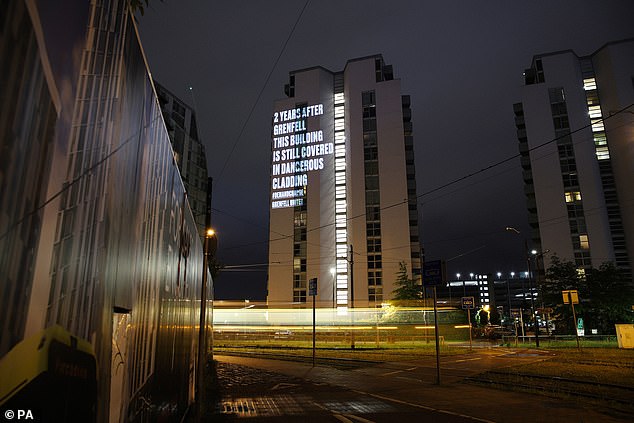 The projection on the 246-flat NV Building (pictured), in Salford, Manchester, warns that ‘dangerous cladding’ still wrapped the outside of the structure 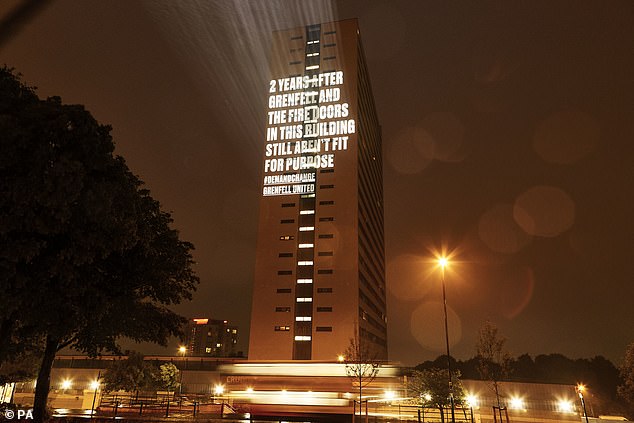 While a message on Cruddas Park House (pictured) in Newcastle, a 25-storey block, designated to over-50s, reads: ‘2 years after Grenfell and the fire doors in this building still don’t work’

‘The major players … we’ve heard a few people have gone in for questioning, they’re roaming free.’

Staff at Kensington and Chelsea Council will also gather at the town hall to pay their respects.

Prime Minister Theresa May said: ‘Two years on from the devastating fire at Grenfell Tower, my thoughts remain with the bereaved, the survivors and the whole North Kensington community.

‘Grenfell was both a local and a national tragedy with far-reaching consequences. In the months and years ahead, I hope future Governments will continue to do everything necessary to support all those affected and make certain the voices of the Grenfell community are heard.

‘We must not forget all those who lost their lives and we must ensure that the Inquiry continues its important work to establish the truth of what happened that terrible night and why.’ 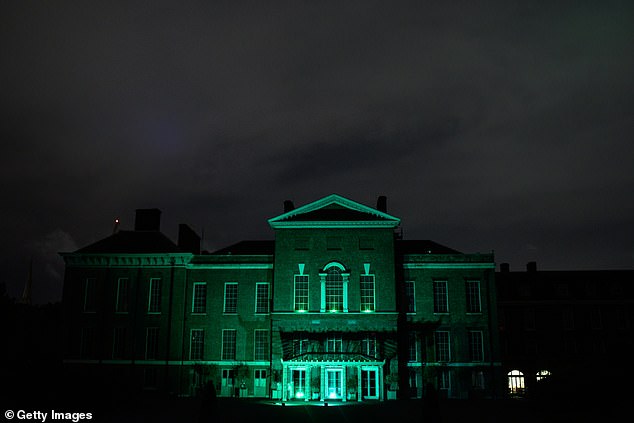 London landmarks including Kensington Palace, Downing Street as well as Grenfell Tower were bathed in a green projection light on Thursday night in tribute to the victims 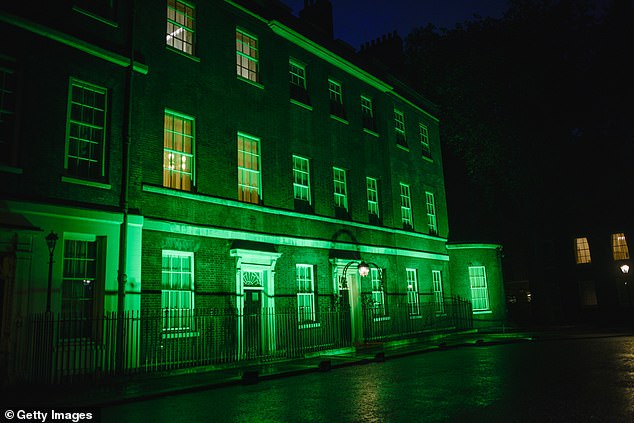