The state’s north is on high alert after more than 200mm of rain was recorded across just three hours in some parts of the Northern Rivers, as the region faces the prospect of a third flooding event this year.

Flash flooding is expected to continue across the rain-soaked region until Friday afternoon after almost 30 rivers across NSW were put on flood alert by the Bureau of Meteorology on Thursday.

Towns including Lismore, Tweed Heads, Murwillumbah, Byron Bay, Ballina and Casino are among those on alert for flash flooding on Friday.

“But the Northern Rivers, in particular, is quite saturated at the moment with significant flash flooding.”

Lismore’s Wilsons River, which reached a record 14.4m during the devastating flood event in February, is on flood watch once again. 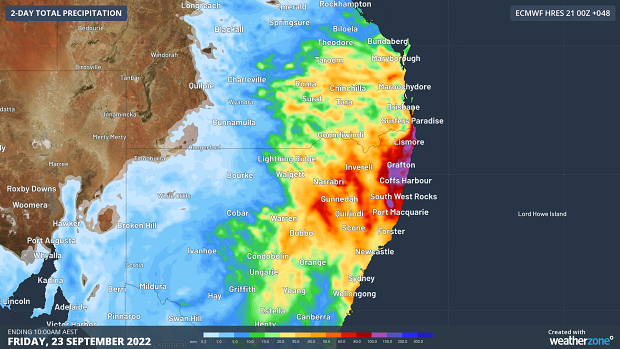 Forecast accumulated rain during the 48 hours ending at 10am AEST on Friday, September 23, according to the ECMWF-HRES model.Credit:Weatherzone

The Bureau said it was expecting the river to reach above the moderate flood level of 7.2m either late Friday or Saturday.

On Thursday, the Bureau of Meteorology’s Jane Golding said grounds in the region would only become more saturated in the coming days.

“Some locations have seen almost a couple of hundred millimetres fall within the last 24 to 36 hours, and we are expecting more rain and thunderstorms,” she said.

“We’re expecting areas to see 24-hour totals a bit above 100 millimetres, but there will be some bulls-eyes in there, with some higher totals than that.”

The extreme weather resulted in the dramatic rescue of three people from floodwaters in Bingleburra near Dungog on Thursday.

Using a rope as a safety line, a senior police constable entered the floodwater to reach a car that was submerged in strong flood water.

Re-entering the water three times, the constable managed to bring a four-year-old boy and two women, aged 51 and 47, to safety. They were uninjured, but treated for shock. 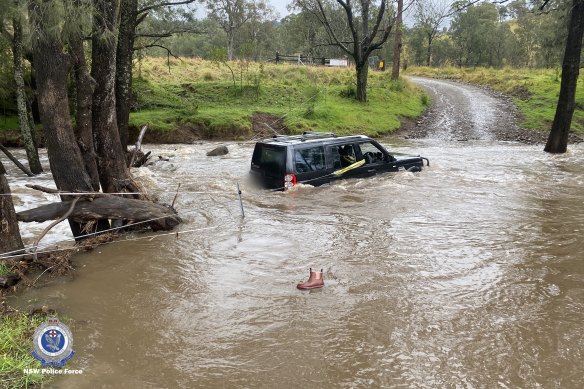 A police officer rescued a four-year-old boy and two women from this car near Dungog on Thursday as heavy rain hits the state’s north.Credit:NSW Police

“As wet weather continues across the state, police are reminding all those in flood-affected or flood-prone areas to not drive through flood waters; if it’s flooded, forget it,” a statement from NSW Police said.

Earlier this month, the bureau declared a third La Nina event was under way in the Pacific Ocean.

The weather event is set to increase the chance of above-average rainfall in eastern and northern Australia across spring and the upcoming summer season.