Sixteen of the 1,000 foreign criminals freed without being considered for deportation in 2006 borders scandal are STILL missing – and over half have not been kicked out

Sixteen of the foreign criminals freed from prison in a notorious border scandal 13 years ago are still missing, it can be revealed today.

The Labour government was rocked in 2006 when it emerged that more than 1,000 foreign offenders had been released without being considered for deportation.

They included killers and rapists, and some went on to commit further serious offences.

The controversy led to the resignation of Home Secretary Charles Clarke, and a major overhaul of the department to make it ‘fit for purpose’.

However, the latest update slipped out by the department shows that the situation has still not been resolved.

Out of the 1,013, 16 individuals have yet to be located, and 38 are still going through the deportation process. 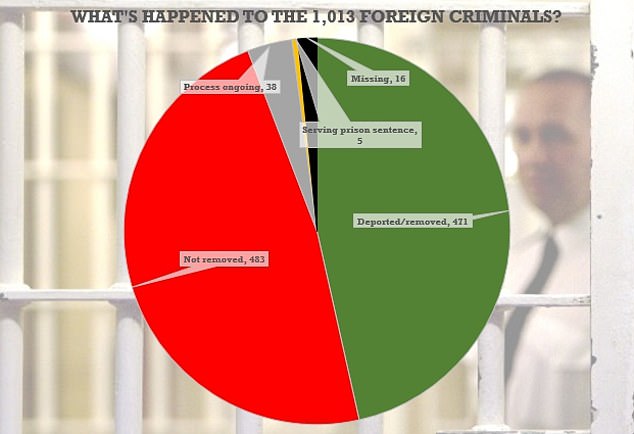 According to the latest Home Office data on the 2006 scandal, 16 foreign criminals out of the 1,013 freed without being considered for deportation have yet to be located. Another 38 are still going through the deportation process

Some 483 cases have been resolved without the people being deported, while 471 were finally removed from the country.

Tory MP Philip Davies told MailOnline: My view is that given its so many years on there’s really no excuse for wh all these people are not out of the country by now.

It is a pretty shambolic state of affairs when we are still trying to round people up to kick them out.

The 2006 scandal that rocked the Home Office

The Home Office admitted in 2006 that more than 1,000 foreign criminals had been released without even being considered for deportation.

As the extent of the chaos at the department became clear, Charles Clarke confirmed that those freed over a seven year period included murderers and rapists.

Some 180 were classified as ‘serious’ offenders.

Mr Clarke promised to make it compulsory for all foreign inmates to be considered for deportation before release.

But he was sacked by then-Prime Minister Tony Blair – who had apparently not been informed immediately about the issues – in May.

John Reid took over as Home Secretary, branding the department ‘not fit for purpose’. The following year the responsibilities were split, with the Ministry of Justice taking over prisons.

‘These are criminals who we don’t want in the country. I would like to see a higher priority given to finding them, rounding them up and kicking them out.

‘I think that is what the British public would expect.’

‘We will always seek to return people with no right to be in the UK.’

In many deportation cases criminals use human rights laws to challenge their removal, or officials struggle to secure passports from their home countries, which do not want to take them back.

The government said it was ‘continually reviewing’ deportation processes, and new rules would mean foreign national could be electronically tagged if they were not detained while their case is ongoing.

Theresa May spent much of her time as Home Secretary trying to fix the border and deportation systems.

Mrs May effectively killed off the UK Border Agency in 2013 after five years of catastrophic failure.

Announcing that UKBA would be cut in two and brought back into the Home Office, she said the agency, set up under Labour, had been ‘troubled’ and condemned its ‘closed, secretive and defensive culture’.

Mrs May admitted that fixing the system and clearing the huge backlog of cases would take ‘many years’.

She laid the blame for the agency’s failings squarely at Labour’s door, saying it was unable to cope with the number of migrants admitted by the last Government. 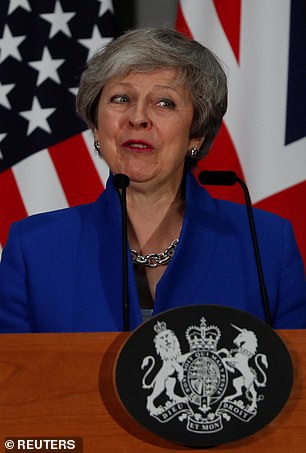 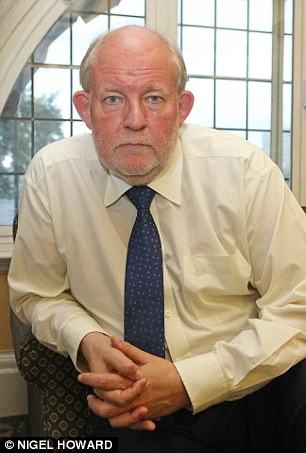 The 2006 scandal claimed the scalp of Labour home secretary Charles Clarke (right). Theresa May (pictured left giving a press conference this week) spent much of her time at the Home Office trying to fix the border and deportation systems