Serving soldiers paid tribute to the heroic efforts of their Second World War brothers in arms with a vigil at the first site to be liberated in Nazi-occupied France.

Shortly after midnight on June 6, 1944, soldiers landed next to bridges over the river and canal at Benouville, Normandy, France.

This morning military personnel retraced their steps over the Pegasus Bridge, which was a key part of D-Day’s Operation Deadstick, as it hampered movement of enemy troops and enable the Allied forces to press on.

Marking the 75th anniversary of the push, which was led by Major John Howard, 130 soldiers from The Rifles and the Army Air Corps held a ceremony at the Pegasus Bridge memorial to mark the moment the gliders landed.

A recording of Major Howard’s speech from a ceremony at the site 30 years ago was played before the Band and Bugles of The Rifles led their troops across the bridge.

Rifleman Peter Ramsden, of the Rifles 2nd Battalion, spoke of his pride in following in the footsteps of D-Day heroes.

The 23-year-old from Durham, and currently stationed in Lisburn, Northern Ireland, said: ‘It’s a massive honour to march across Pegasus Bridge.

‘As one of our regiment’s most prestigious battle honours, it means a lot not only to the regiment but to the lads in the regiment as well.’ 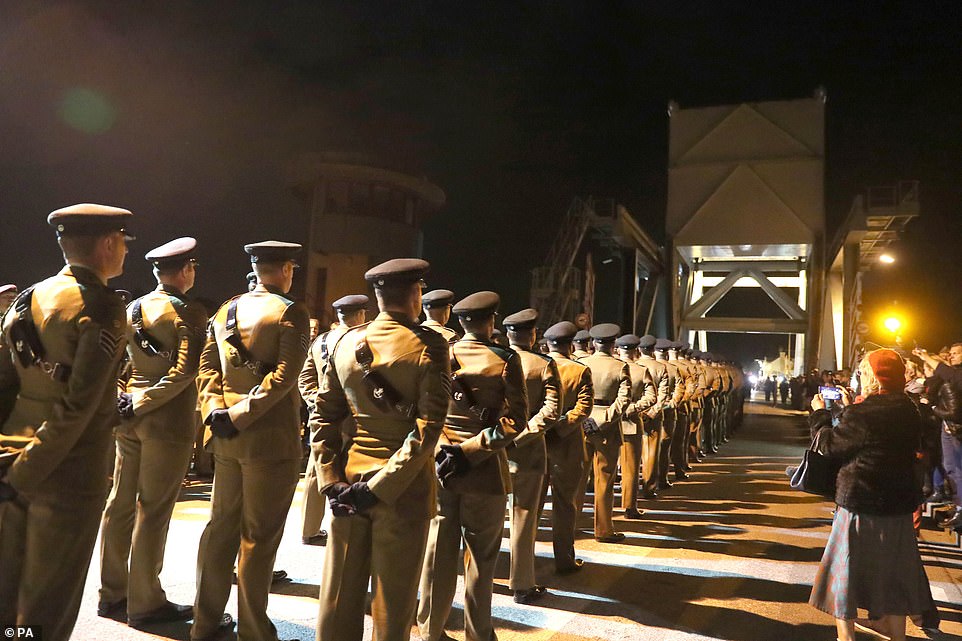 Members of The Rifles march across Pegasus Bridge in Normandy, France, during a vigil as part part of commemorations for the 75th anniversary of the D-Day landings. The structure was a key focus of Operation Deadstick, led by Major John Howard, which enable the Allies to establish a foothold on French soil that allowed them to push on into the Nazi-occupied country to defeat Hitler’s forces 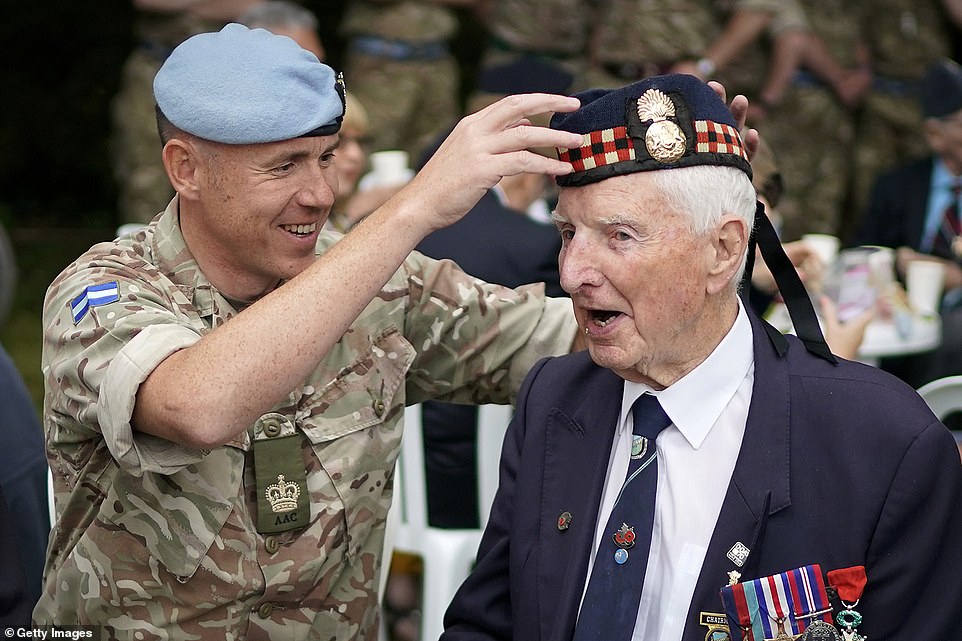 Warrant Officer James Steele, of the Army Air Corps, adjusts the hat of D-Day veteran Bob Laverty, aged 94, during a lunch for veterans in the garden of Cafe Gondree – the famous Pegasus Bridge Cafe, which was the first place to be liberated from the Germans in Nazi-occupied France 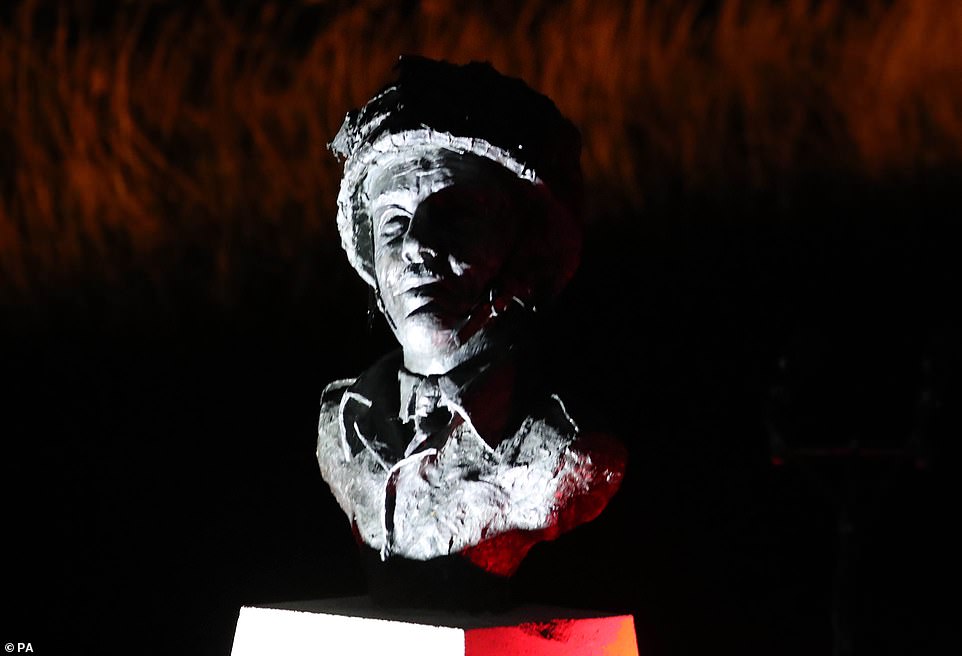 A bust of Major John Howard stands on the spot that was the focus of Operation Deadstick. His daughter, Penny Bates, was among those laying wreaths on the lawn of the Pegasus Bridge memorial museum. Her father is now part of national folklore, with the bridge road itself renamed Rue Major John Howard 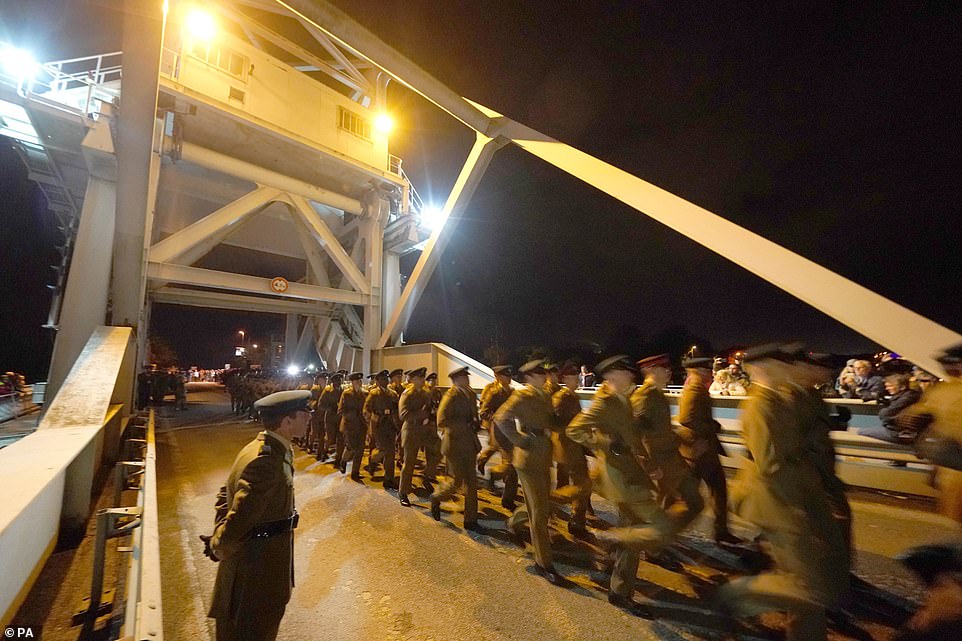 Members of The Rifles march across Pegasus Bridge in Normandy, France during a vigil as part part of commemorations for the 75th anniversary of the D-Day landings of June 6 1944, which were the first steps taken by the Allies on the road to defeating Hitler’s forces 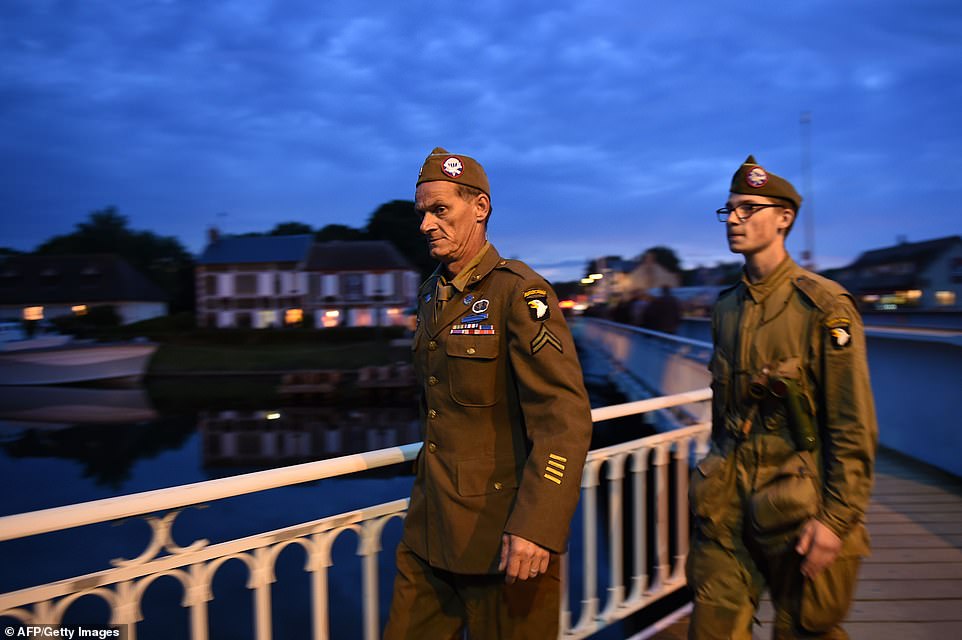 Men dressed as British officers in World War II uniforms walk on the Pegasus bridge, in front of the Cafe Gondree, during a silent vigil  to commemorate D-Day on its 75th anniversary 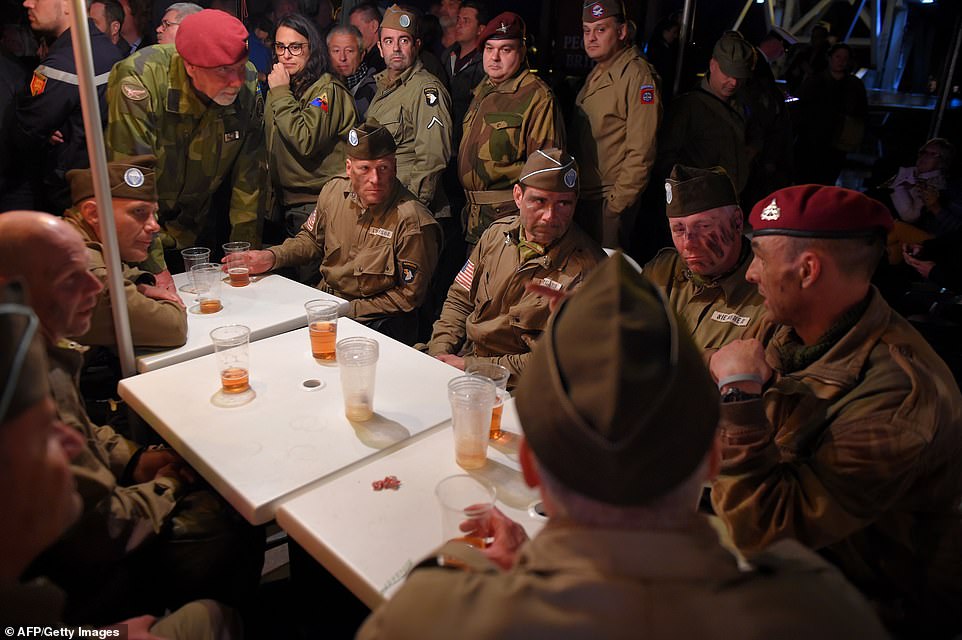 Men dress in World War II uniforms as they gather in Cafe Gondree as part of a commemorative vigil honouring those who gave their lives in the D-Day landings. The spot on which these men are sat was the first place to be liberated by the Allies in Nazi-occupied France 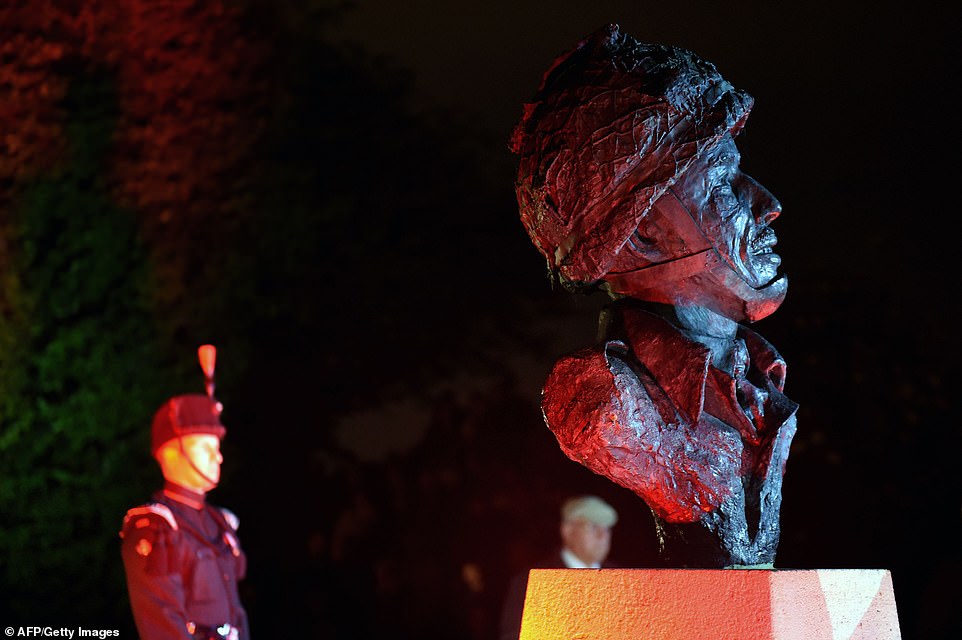 A bust of Major John Howard is pictured during tonight’s silent vigil and march over Pegasus Bridge, Benouville, Normandy,  to mark the 75th anniversary of the Allied landings 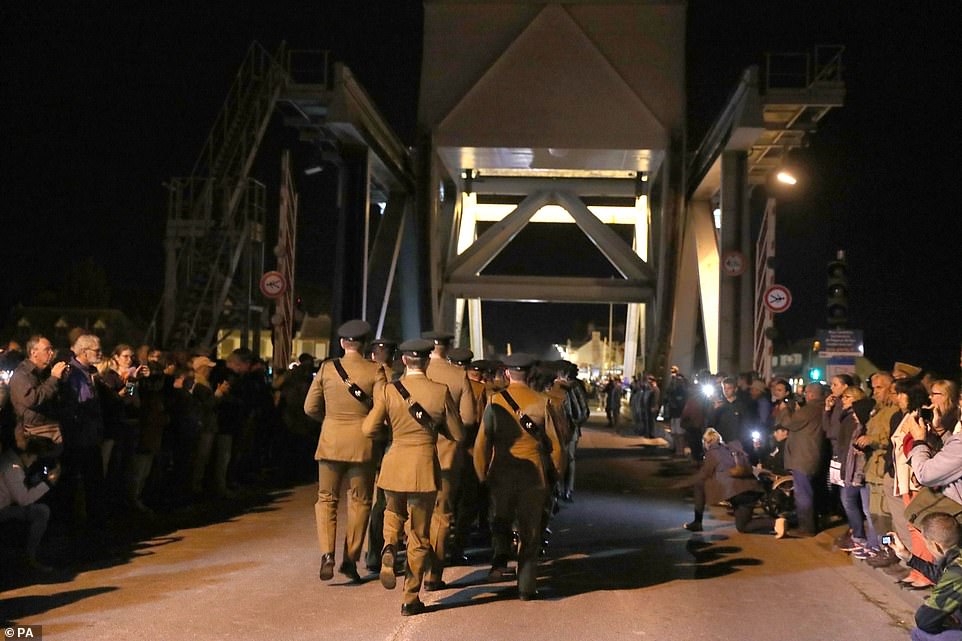 The Rifles march across Pegasus Bridge in Normandy, France, as they honour the 75th anniversary of the D-Day landings on June 5 1944 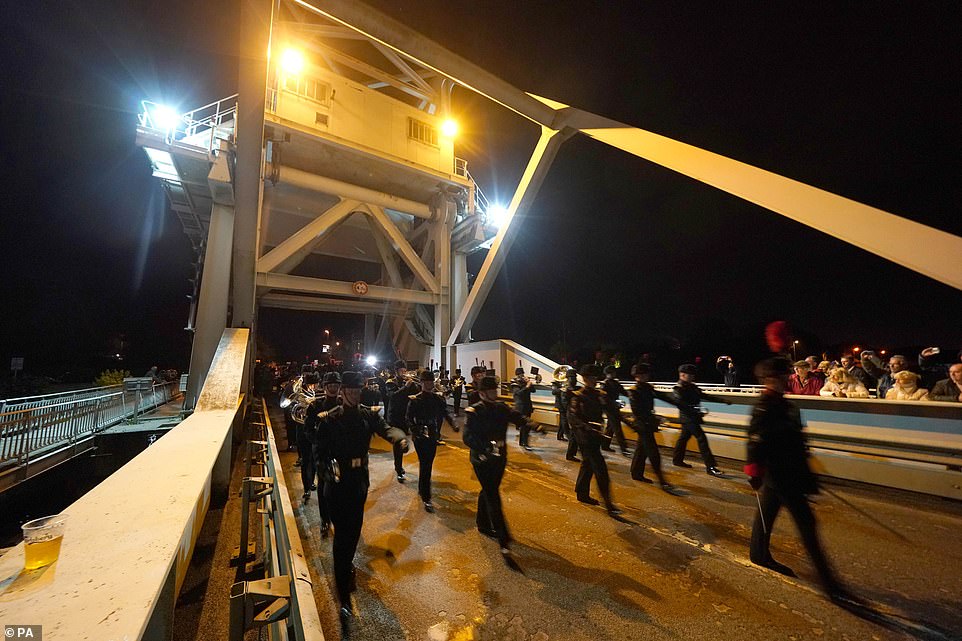 The Rifles pass over the Pegasus Bridge, which was the site of the first liberation in Nazi-occupied France on D-Day as Operation Deadstick marks its 75th annviersary