A trial for the South Carolina man accused of kidnapping and killing a woman who mistook his car for her Uber ride began this week, with prosecutors alleging that the man stabbed the victim more than 100 times before dumping her body in the woods near his home.

Nathaniel Rowland is on trial for the kidnapping and murder of 21-year-old Samantha Josephson, a law student who disappeared from Columbia’s Five Points entertainment district one night in March 2019.

In opening arguments in Richland County Judicial Center in Columbia, prosecutors previewed evidence and testimony they said would implicate Rowland. That included surveillance camera footage of Josephson entering Rowland’s car as well as a witness who the prosecutors say allegedly watched Rowland clean the blade he used to repeatedly stab Josephson. 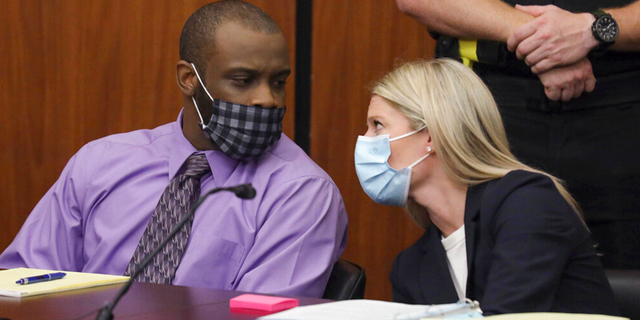 Defendant Nathaniel Rowland speaks with his attorney, Alicia Goode, right, during his trial in Richland County Court, Tuesday, July 20, 2021, in Columbia, S.C.
(The State via AP)

Fifth Circuit Solicitor Byron Gipson said cameras captured Rowland circling the block multiple times in his black Chevrolet Impala before pulling up to Josephson, who was waiting alone. Josephson got into the car, and it was the last time she was seen alive, the prosecutor said.

Gipson said more than 100 stab wounds, cuts and other abrasions were found on Josephson’s body, which was dumped in the woods a short distance from Rowland’s family home.

Alicia Goode, one of Rowland’s public defenders, said it was clear Josephson fought back, “kicking and punching and clawing the person attacking her.”

Goode noted that investigators had amassed evidence after the crime, including swabbing Josephson’s body and Rowland’s car – yet none of the DNA evidence gathered from the victim matched Rowland.

“Zero: that’s the amount of DNA on Samantha Josephson’s body that matches Nathaniel’s,” Goode said. “Zero. It’s not on her clothing, not under her ripped and torn fingernails, it’s not on her ankles.”

Gipson, who didn’t address any potential motives for the crime, discussed video evidence showing Rowland attempting to use the victim’s debit card and trying to sell her cellphone. Investigators later found Josephson’s blood and cellphone in Rowland’s car, along with bleach, window cleaner and cleaning wipes.

Rowland, who has pleaded not guilty to the charges, has been in the Richland County jail since his arrest a day after Josephson’s disappearance. He could face up to life in prison if convicted of murder.