Minority shareholders of the Kerry Stokes-chaired Seven West Media have been kept in the dark about how $1.87 million of company funds was lent to executive Ben Roberts-Smith to fight war crime allegations. 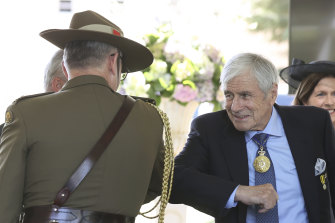 The agreement, seen by The Age and The Sydney Morning Herald, gives the first confirmation that Seven West Media – a listed company of which the Stokes family is a majority shareholder – lent shareholder money to Mr Roberts-Smith.

Last June the loan from the listed company was paid by the Stokes family’s private company, ACE, with Kerry and Ryan Stokes agreeing to continue funding the accused war criminal privately because of the “unfairness of your [Mr Roberts-Smith’s] treatment” by the military Inspector-General.

Under Australian corporate law, the resources of a public company must only be used in the best interests of the shareholders of the company as a whole. Mr Roberts-Smith is the Queensland manager of Seven West Media, but his fight against the Inspector-General’s inquiry into war crime allegations has little obvious connection to the business of his employer.

A Seven spokesperson said the loan was “repaid to Seven and this is no longer a Seven issue. This is a private matter regarding an employee that Seven will not engage in.” 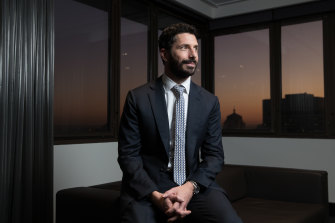 Seven West Media directors, including business heavyweights David Evans and John Alexander, did not respond to questions about whether they knew of the loan and use of Seven’s legal team to assist Mr Roberts-Smith’s private interests.

The military Inspector-General’s inquiry ran between 2016 and late 2020 and was led by Court of Appeal judge Paul Brereton. It has been backed by Chief of the Defence Force Angus Campbell, the federal government and legal and human rights groups. Mr Roberts-Smith was one of its key suspects and it has referred multiple war crime allegations concerning him to ongoing federal police probes.

The secret deal to finance Mr Roberts-Smith’s private battles would also be likely to attract scrutiny after the revelation on Sunday that he engaged in an alleged criminal conspiracy to intimidate Brereton inquiry witnesses and to conceal evidence by burying it in his backyard. 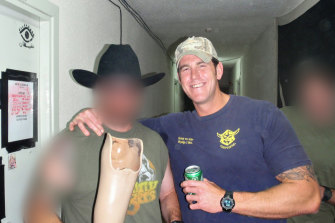 Ben Roberts-Smith with a novelty drinking vessel made from the prosthetic leg of an Afghan man he had killed.

Also revealed by The Age, the Herald and 60 Minutes were taped private conversations in which Mr Roberts-Smith expressed his gratitude to Kerry Stokes for backing his fight against war crime allegations, and Mr Roberts-Smith’s desire to “f…king destroy” the politicians, SAS soldiers and journalists who had made adverse comments about him.

“I will take it all the way … and I’ve got the bank to do it,” he says of the support from the Stokes family. “They are privy to everything that’s gone on in the courts, they know what is going on. Put it this way, mate, [Kerry] Stokes isn’t an idiot, he’s not going to back someone … who’s a loser.”

There is no suggestion that Kerry Stokes or his son knew of Mr Roberts-Smith’s comments or the allegedly criminal behaviour aimed at undermining the Brereton inquiry.

However, the leaked June 2020 agreement raises questions for members of the Seven West Media board who knew of the financing of Roberts-Smith’s war-crime defence. It reveals how the Seven Network’s legal team had accrued “considerable experience” in Mr Roberts-Smith’s fight against the Inspector-General’s inquiry and a separate defamation proceeding he took against The Age and the Herald.

“The company understands there is a strong case to defend your reputation and the unfairness of your treatment by the … [Brereton] Inquiry.”

It shows the Stokes family has demanded Mr Roberts-Smith pay the private company, ACE, a 15 per cent share of any funds he wins in his defamation battles. He must also follow the advice of Seven’s legal team if he loses his defamation battle and it believes an appeal is warranted.

A listed company does not usually pay an employee’s legal costs when the matter does not directly relate to the business, but it does occur. And Mr Roberts-Smith was not the first company employee to benefit from financial support from Seven. Media sources, who spoke anonymously because the details of the agreement were confidential, said Seven paid the legal costs of former news boss Peter Meakin, who was charged with three drink-driving offences between 2006 and 2007.

Ownership Matters director Dean Paatsch, who specialises in governance and proxy advice, said “it is not unusual or unheard of for public companies to extend unsecured loans to staff”.

“However, Seven is a listed company and minority shareholders didn’t stand to gain anything out of the loan. It was therefore appropriate to transfer it to Mr Stokes.”

The loan to Mr Roberts-Smith was initially considered short-term and the company expected the full amount to be repaid, according to people familiar with the arrangement. Approval of payments or loans typically do not reach the board of directors unless they are above a particular threshold.

The Ryan Stokes-approved agreement outlines the use of Seven West Media shareholder funds to pay $1.87 million for Mr Roberts-Smith’s “legal costs” as well as Ryan Stokes’ offer to pay back the $1.87 million to the listed firm via a new loan agreement with the private company.

Legal costs are described in Ryan Stokes’ letter as “proceedings relating to the Inspector-General of the Australian Defence Force”, which involve Mr Roberts-Smith’s appearance at confidential hearings in which he was accused of involvement in multiple executions. These hearings separately triggered two federal police probes into Mr Roberts-Smith.

The legal costs also include defamation proceedings launched by Mr Roberts-Smith against The Age and the Herald and an overseas media company after they reported the allegations for which he is the subject of the police investigation.

“The company [ACE] understands there is a strong case to defend your reputation and the unfairness of your treatment by the [media] defendants and in the [Brereton] inquiry proceedings,” the Ryan Stokes agreement states.

Mr Roberts-Smith did not agree to hand over any assets to Seven if he was unable to foot the bill, according to people briefed on the matter.

The existence of a loan was first reported last year in The Australian Financial Review, but only that the loan came from the Stokes family’s private company. Kerry Stokes has also revealed he is using Mr Roberts-Smith’s Victoria Cross medal as collateral in the event he can’t pay back the loan.

Using ACE to lend funds to Mr Roberts-Smith is far less controversial than using funds from Seven West Media, the shareholders of which include Spheria Asset Management, Dimensional Fund Advisors and The Vanguard Group.

The agreement reveals that the $1.87 million was lent to Mr Roberts-Smith via Seven Network Operations Limited, a subsidiary of Seven West Media, but this loan was repaid with ACE funds in mid 2020.

The motivation for the transfer of the loan to ACE isn’t clear, but it occurred at a time when Seven West Media was under financial pressure and the coronavirus pandemic had caused a sharp downturn in advertising revenue. The company received more than $30 million from the federal government’s JobKeeper package and cut staff wages by 20 per cent. The company also conducted a large round of redundancies and in July, renegotiated its $750 million banking facilities with its eight existing lenders.

In its latest full-year financial result, which was reported after the loan was transferred, the company revealed a net debt of $398 million. Earnings before interest, tax, depreciation and amortisation slumped nearly 50 per cent to $129.6 million in the year ended June 27, 2020, while revenue dropped 14 per cent to $1.2 billion.