The Andrews government is pushing ahead with its flagship, multibillion-dollar Suburban Rail Loop even though it has not submitted a business case to Infrastructure Australia.

Early work has begun on the $35-billion first stage of the rail loop, which will run from Cheltenham to Box Hill and is set to open in 2035. 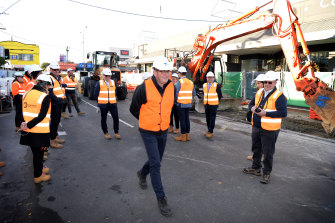 Prime Minister Anthony Albanese committed $2.2 billion ahead of the May election as an initial investment in the 90-kilometre orbital railway through Melbourne’s middle suburbs. Victoria is seeking another $9.3 billion in federal funds.

But Infrastructure Australia – the advisory body which helps the federal government decide how best to use taxpayer money – has confirmed it has not received a detailed financial plan for the project, preventing it from assessing whether it deserves further funding.

A spokeswoman from the advisory body said the Victorian government made a preliminary on November 3 last year, three years after announcing the project, but did not include a business case.

“We continue to engage with the Suburban Rail Loop Authority, however no new material has been received beyond the stage 1 submission,” she said.

“This project was announced on Facebook 1432 days ago, and previously the Andrews Labor government has made it very clear that it is essential for business cases for all projects to be assessed by Infrastructure Australia,” he said.

“The fact that they haven’t done that is an example of stunning hypocrisy and also opens Victorian taxpayers and the Victorian budget up to massive risk.”

In 2014, newly elected Premier Daniel Andrews tore up the Napthine Liberal government’s contract to build the East West Link, arguing it was a “dog of a project”, with traffic projections shrouded in secrecy and “plucked out of thin air”.

The Age revealed last year that the Suburban Rail Loop was conceived in a secretive process led by consultants at PwC that shut out most of cabinet and the then-head of the Transport department.

After a string of funding scandals under the former Morrison federal government, Albanese won the May election promising to take politics out of big-project funding and restore Infrastructure Australia’s role in guiding where cash should flow.

An Andrews government spokeswoman said Victorians “voted for the Suburban Rail Loop” at the 2018 election and that “Infrastructure Australia has backed that in” by listing suburban connectivity as a priority project.

“If we waited for Infrastructure Australia to finalise all their assessment processes before starting work on projects, then the Metro Tunnel would be years away, 65 level crossings would not have been removed, and we would not be building Melbourne Airport Rail,” she said. 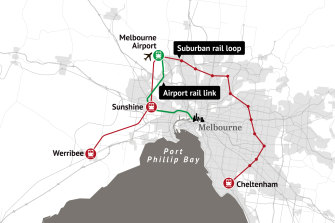 The state government has said the cost-benefit ratio for the first two stages suggests that for every $1 spent on the project, between $1.10 and $1.70 would be returned.

A 400-page investment case released last year showed just two sections of the line in the east and north-east could cost $50 billion and would not be completed until 2053.

The second proposed section of the loop would run from Box Hill to Melbourne Airport, which would be followed by a final link through the western suburbs to Werribee.

Michael Buxton, professor of Environment and Planning at RMIT, said it was remarkable the state government committed to the project months before the 2018 election without knowing how much it would cost or considering alternatives.

“Infrastructure Australia and Infrastructure Victoria are supposedly set up to assess major projects and give them a priority and to provide an assessment of whether they’re worth pursuing,” he said.

“[Victoria] didn’t do that – it just committed itself to the project regardless of what anybody else thinks.”