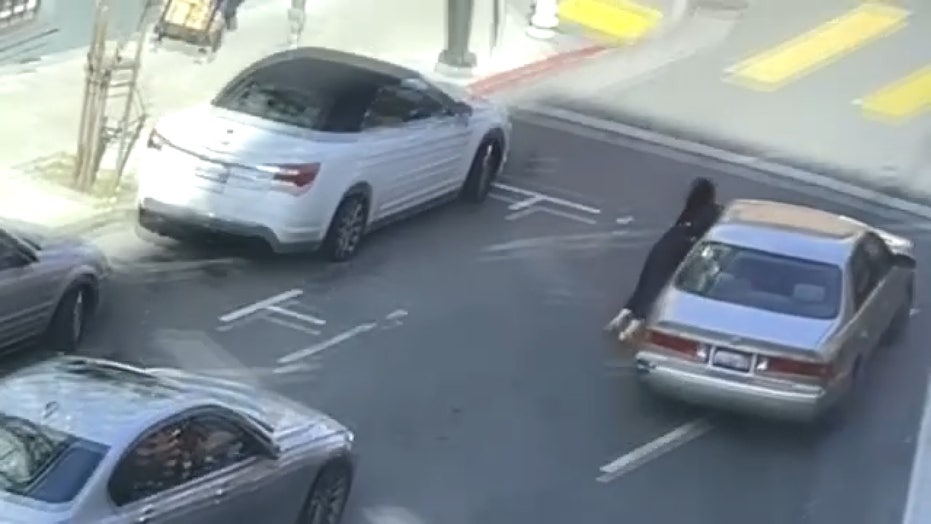 Three suspects caught on video dragging an Asian woman by a moving car during a robbery in San Francisco over the weekend remain at large as police continue to investigate.

The San Francisco Police Department told Fox News via email that investigators are not releasing any information on the suspects at this time.

No arrests have been made and the investigation remains active and open, police said.

Few details are known about the three men, who appeared to flee the scene in a tan-colored sedan. At least one man appeared to be wearing an orange ski mask in a photo shared by KGO-TV anchor Dion Lim.

The incident occurred amid a heightened national awareness around people of Asian descent being victims of crime, though authorities have said it is unclear if the woman was targeted because of her race.

The victims told police they were walking down Bush Street when three unknown men approached them from behind. As one man snatched the younger woman’s purse, the two women tried to take it back.

During the struggle, a second suspect punched the 33-year-old in the face multiple times, police said. The 53-year-old tried to help her friend but was knocked to the ground and kicked multiple times.

The suspects then ran to the vehicle and began to flee. But the 33-year-old grabbed onto the vehicle in an attempt to get her purse back, police said.

The woman, identified as Clarisse, is seen on video taken by a witness clinging to a vehicle carrying the three suspects, FOX2 of the San Francisco Bay Area reported. The video shows the vehicle dragging the woman a short distance before she is knocked off and slams into the pavement.

The suspects fled the scene. Both women were treated for non-life-threatening injuries.

Clarisse had bruises near her right eye and arm, along with cuts and scrapes to her hand and foot, according to pictures obtained by local news stations.

Despite her ordeal, Clarisse had a message of forgiveness for the suspects.

“Know that you’re loved, know people are there to help you,” Clarisse told KABC-TV. “I know it’s hard now but we need to get back and have people in work and school so they are predictively occupied and don’t feel like they need to do things.”