Coronavirus cases will tumble to a total of 85,000 symptomatic infections on the day schools are set to unbolt their gates, a symptom-tracking app has predicted, with daily cases plummeting to levels not seen since last June.

The ZOE Covid-19 Symptom Study said there will be 3,373 cases a day by March 8 – the equivalent of 1 in 780 Britons suffering an infection with the virus. The top epidemiologist behind the project said these levels would ‘allow’ children to return to school, and for people to start meeting friends and family again outdoors.

Doom-mongering Sage scientists yesterday warned infections must fall to 10,000 before the Prime Minister can dare to consider re-opening society, which would mean one in 5,598 having Covid-19 in England.

The app’s estimates are based on more than one million weekly reports from Britons across the country, who enter each day whether they are feeling well or suffering symptoms of Covid-19. But these figures rely on symptomatic Covid cases, and do not capture symptomless infections estimated to make up at least a third of the total.

It also said there were 14,818 new daily infections by February 6, the latest date available, marking a 27 per cent drop from last Thursday and a 79 per cent dip from the peak of 69,000 daily cases in January.

They added the R value was at 0.8, remaining below the critical threshold of one suggesting that the UK’s second wave of the pandemic is now firmly in retreat.

Boris Johnson was last night forced to insist he would stick to a deadline of March 8 for schools to re-open, amid demands from lockdown-sceptic Tory MPs for the promise to be ‘signed in blood’. He will be laying out the full roadmap for exiting the draconian measures on February 22.

It comes amid mounting fears the vaccination drive – the light at the end of the tunnel for getting the country out of an endless cycle of shutdowns – is slowing down after the head of the Francis Crick Institute revealed their London-based vaccination centre had more than 90 per cent of appointments going spare for the last two weeks.

There are similar reports from Telford and Taunton Racecourse in Somerset, sparking fears that ministers are too focused on vaccinating top priority groups at the expense of areas where this target has already been met. 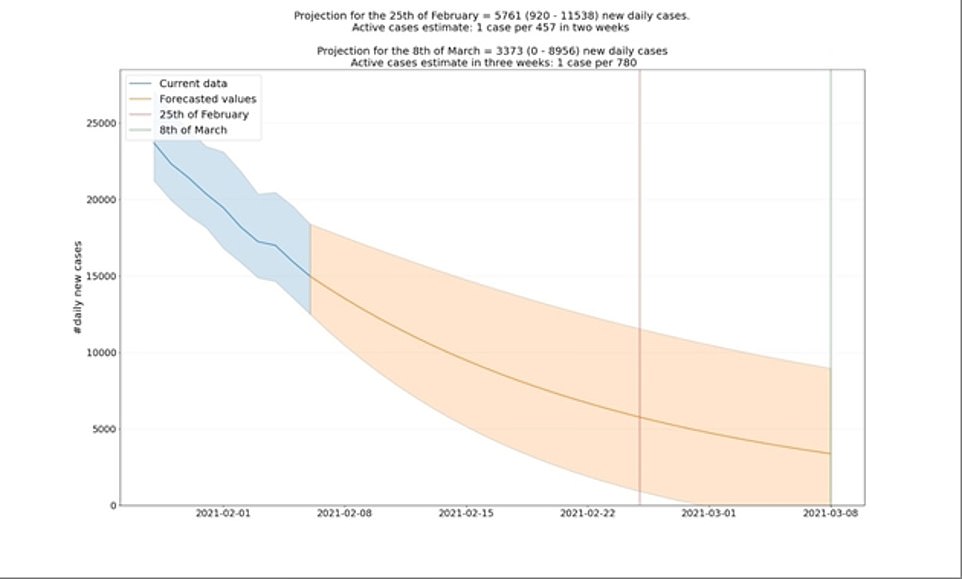 The above graph shows the estimated fall in coronavirus cases in the UK over time, based on the ZOE Covid Symptom Study apps figures. The epidemiologists behind the app have predicted there will be 3,373 cases a day – or one in 780 infections – by March 8, the date when schools are set to re-open. SAGE says cases must get to 10,000 – or the equivalent of one in 5,598 in England having the virus – before any re-opening can be considered 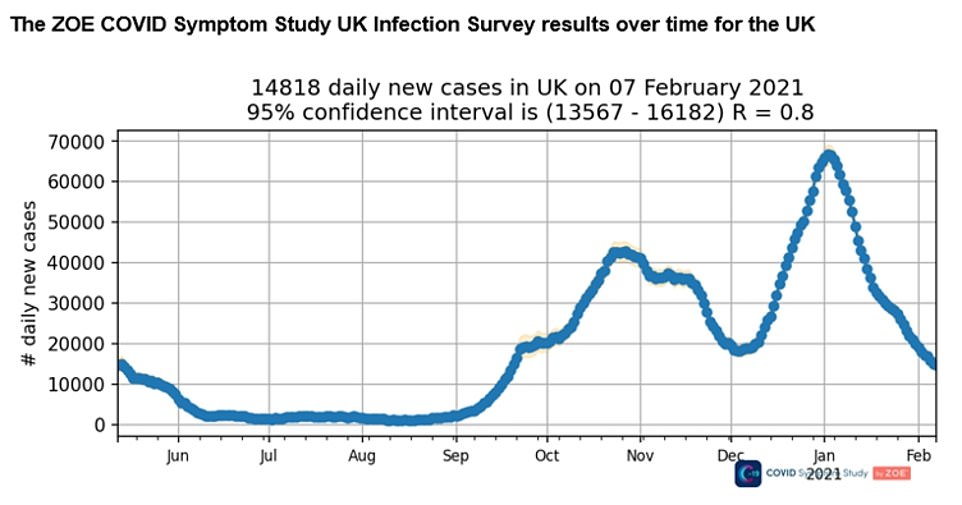 The app also predicted there are currently 14,818 new Covid-19 cases in the UK each day, a 27 per cent fall from last week and a 79 per cent fall from the peak when there were an estimated 69,000 new infections daily. They also said the R rate had fallen to 0.8, in another sure sign the UK’s second wave is firmly in retreat 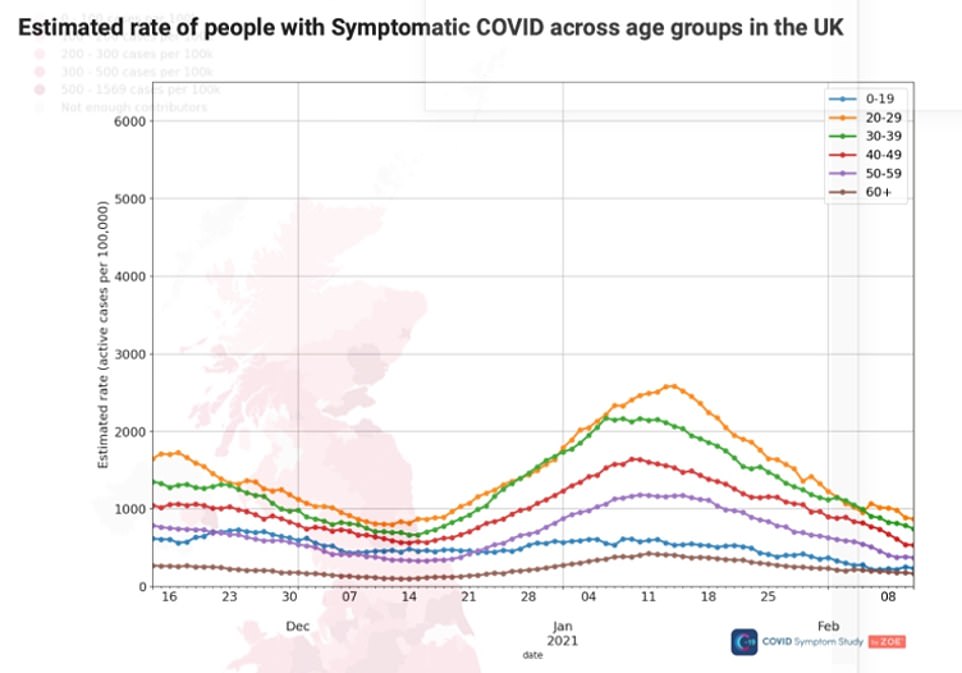 They also said Covid-19 cases were continuing to fall in all age groups, although the highest rates were still among those aged 20 to 29. The app generates estimates based on the reports of more than a million users in the UK on whether they are suffering symptoms from the disease and whether they have tested positive 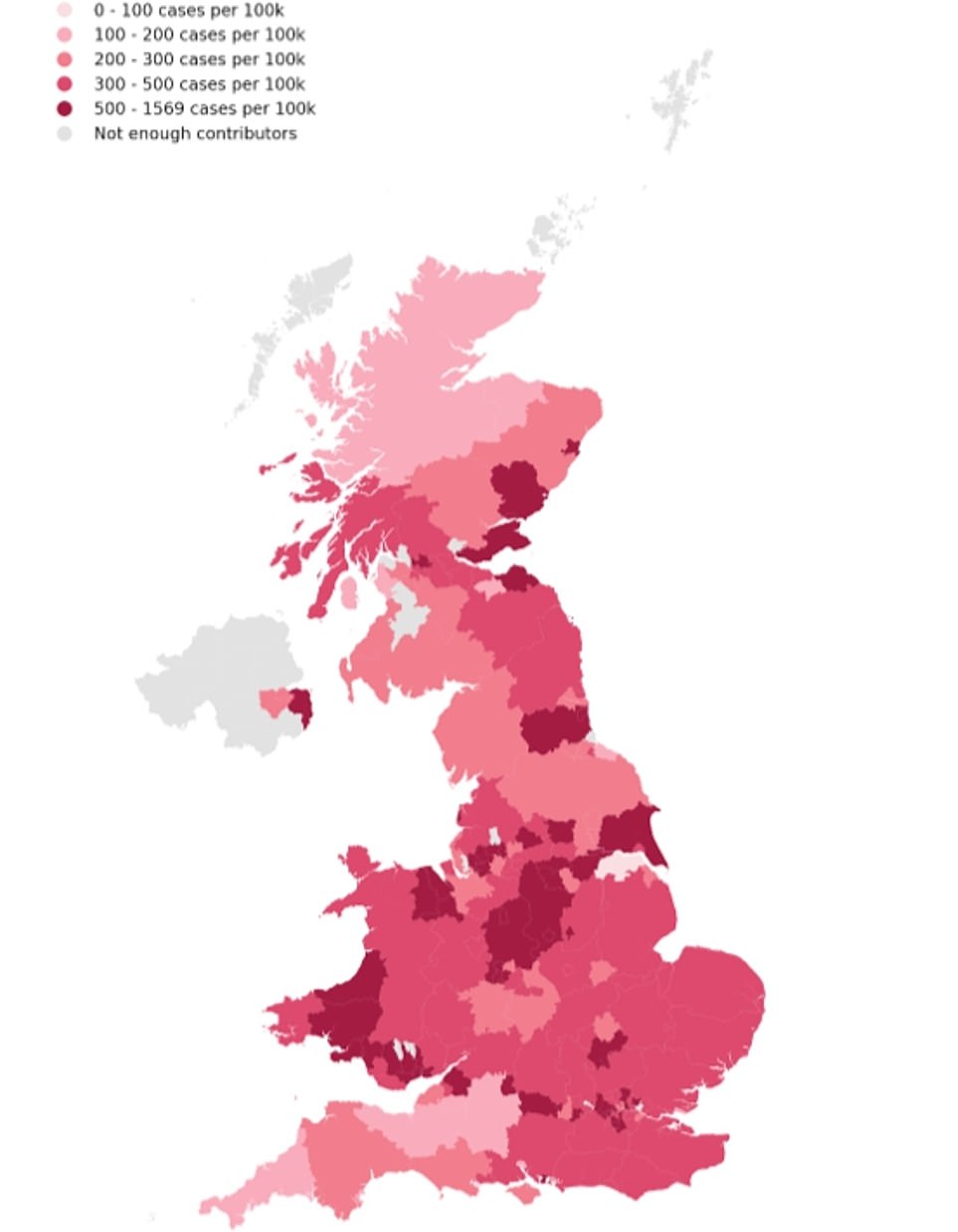 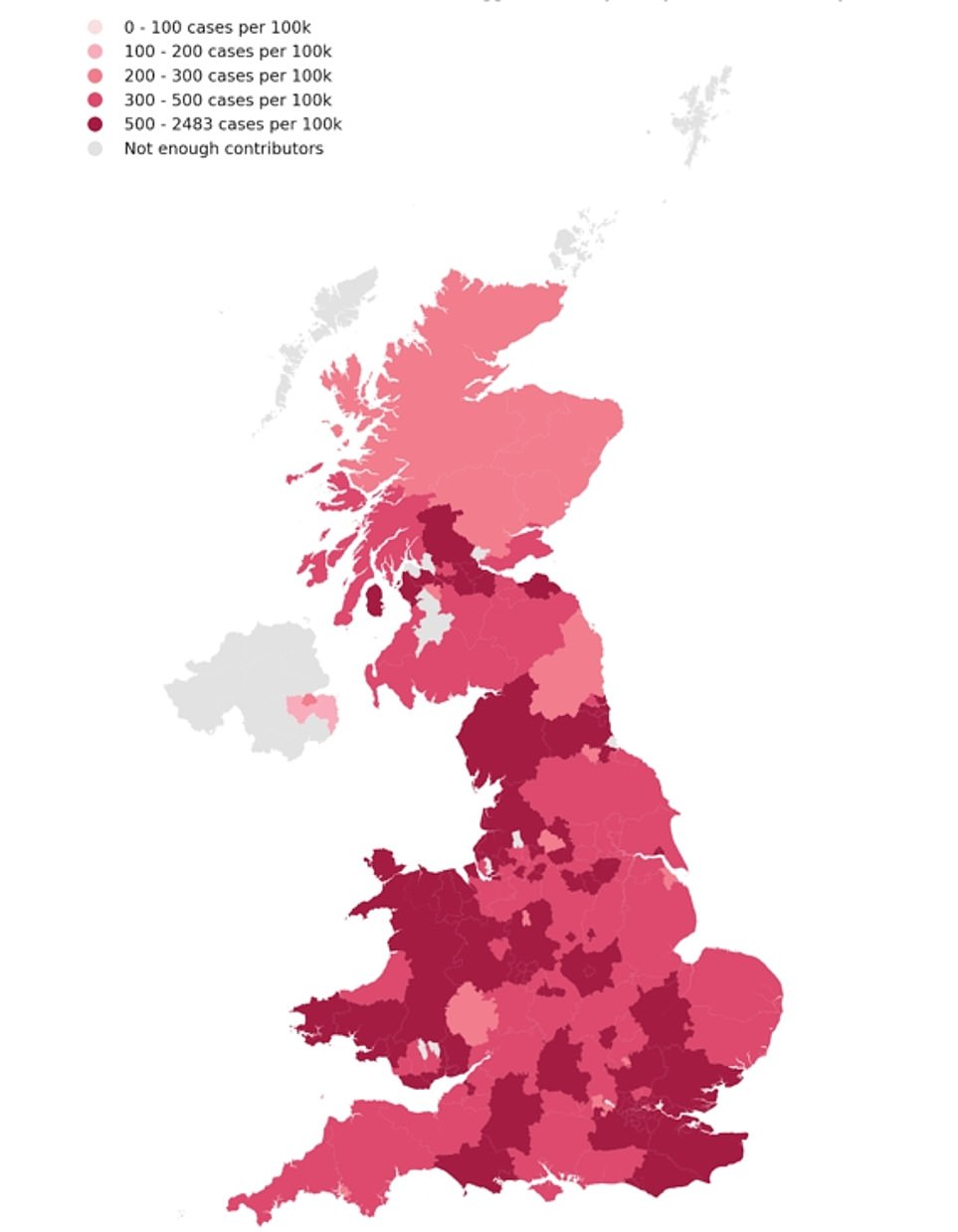 Goodbye Covid?: Above is the estimated prevalence of the virus – the total number of people infected at any given point – in the week ending February 10 (left) and the week before (right) 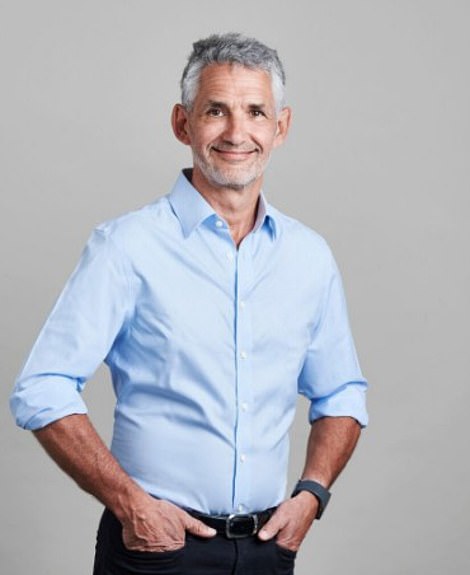 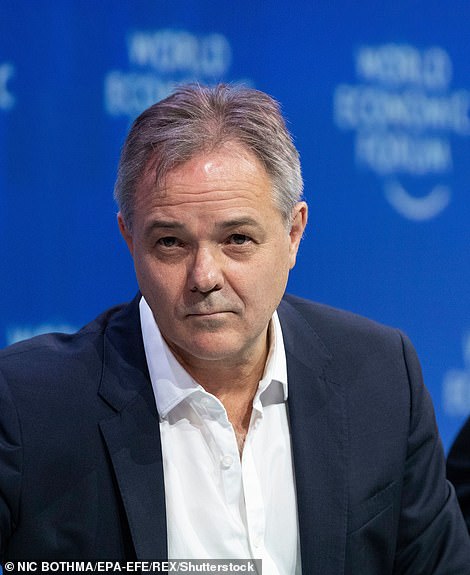 Professor Tim Spector, an epidemiologist who leads the Covid app, said today their estimates for March suggested schools should be allowed to reopen and Britons should again be able to meet friends and family outdoors. Yesterday Sage scientist Sir Jeremy Farrar warned the UK must hit 10,000 cases in total before easing restrictions

Teachers and police officers could start getting Covid vaccines by April, with them expected to be first in line once the over-50s have been jabbed.

Britain is on course to have offered first doses to all 15million in the top four priority groups — over-70s, care home residents and staff, NHS workers, and the seriously ill — by next Monday.

The roll-out will then be expanded to 65 to 69-year-olds, before working down the age groups until as many vulnerable Britons are covered as possible. No10 hopes to have offered jabs to all 32million in the top nine priority groups by the end of April.

There is currently no recommendation for who should be prioritised once the over-50s are vaccinated.

But the Joint Committee on Vaccinations and Immunisations (JCVI), which designed the UK’s priority list, is expected to say Britons in frontline roles will be next in line, Whitehall sources told The Telegraph.

It is thought the decision will be officially announced in the week starting February 22, when Boris Johnson is set to unveil his lockdown-easing plan.

The move comes as police officers have been told they can get the Covid-19 jab at health centres with spare capacity but must wear plain clothes in order not to draw attention to themselves.

Force leaders were said to have felt ‘betrayed’ when Health Secretary Matt Hancock announced this week that frontline officers may have to wait months for jabs. But the Mail has learnt of an arrangement with the NHS that lets police receive a vaccine if there is spare capacity at a centre and the jab would otherwise go to waste.

Unveiling the Covid Symptom Study’s estimates for cases when schools re-open, its leader Professor Paul Spector said infections should be low enough by March 8 to allow children to go back to school.

‘By March 8 we should have less than 1 in 740 people with symptoms allowing us to get kids back into the classrooms and starting to allow people to exercise and meet, at least outdoors, where the risk of transmission is much lower,’ he said.

‘Until then it’s important to keep following the guidelines, even if you have had a vaccine, and keep reporting symptoms and getting tested even if your symptoms are not typical.’

He added: ‘Based on the ZOE data and our predictions we are soon to be in the same place we were in early June, with the advantage of having a large proportion of the population vaccinated which could mean good news in terms of lifting some restrictions sooner rather than later.’

Their estimates also showed infections were still falling in all regions of the UK and in all age groups, in a sure sign the second wave is firmly in retreat.

Birmingham is now the country’s hotspot, they said, with an estimated 1 in 135 residents suffering an infection, followed by London, 1 in 152, and Peterborough, 1 in 160.

Sage member and director of the Wellcome Trust Sir Jeremy Farrar yesterday said Covid-19 infections must fall by 75 times to 10,000 a day before current stringent measures can be relaxed. For comparison, the figure – the estimated number of people who would test positive daily – never dipped below 14,000 during the summer.

He added that it was ‘not sensible’ for the Government to commit to specific dates for re-opening, arguing it should instead be ‘led by the data’ which at this point still suggests a lockdown should be in place.

‘I appreciate that businesses have to plan and everything else,’ he told BBC Radio 4’s Today programme yesterday, ‘but the data has to drive us, and in 2020 we lifted restrictions too quickly when the data would not really have allowed that and, frankly, as a result the transmission went back up in this country’.

A second Sage scientist, Professor John Edmunds from the London School of Hygiene and Tropical Medicine, warned that stringent measures to control the virus – such as face mask wearing and the Rule of Six – could be in place for the whole of this year, with some likely to last ‘forever’.

Fears are mounting today that social distancing rules could stay in force for most of the year – despite Boris Johnson insisting schools will start to reopen on march 8.

A government ‘roadmap’ out of lockdown being frantically thrashed out behind the scenes is believed to envisage Britons continuing to wear face masks and remain apart until at least the Autumn – with scientists urging it to be even longer.

The blueprint could allow other aspects of life and the economy to resume more quickly, but would raise the prospect of grandparents still being unable to hug their grandchildren, potentially until next year.

The grim picture emerged as the PM scrambled to quell Tory fury over signs the timetable for easing restrictions is slipping.

No10 and ministers sparked alarm by saying the roadmap will be unveiled ‘in the week of February 22′, rather than on that exact date as Mr Johnson himself had indicated on several occasion. As ministers have pledged to give parents and schools two weeks’ notice before reopening, it appeared to put the March 8 schedule for starting to get children back in classrooms in doubt.

However, after Education Committee chair Robert Halfon led calls for the commitment to be ‘signed in blood’, Downing Street sources finally moved to quell the anxiety saying there is ‘categorically no change’ to the PM’s schools plan.