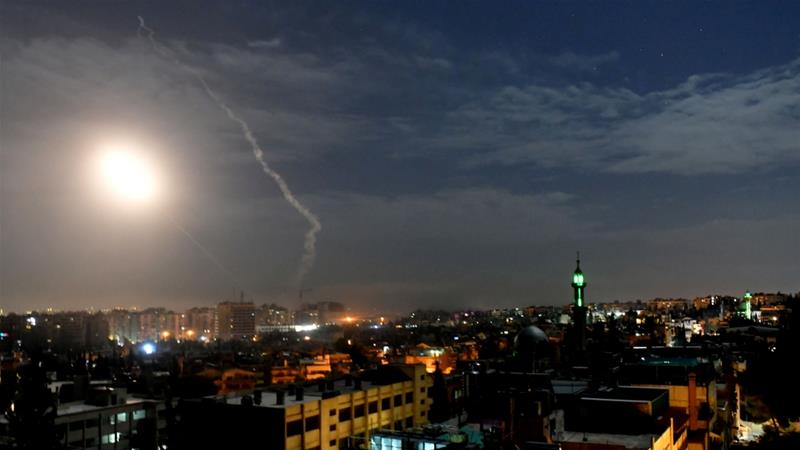 “Israeli authorities are increasingly practising state terrorism,” the foreign ministry said on Tuesday in a statement carried by the official SANA news agency.

“The latest heinous Israeli aggression falls within the framework of ongoing Israeli attempts to prolong the crisis in Syria,” it added.

Syria’s foreign ministry filed a complaint to the United Nations Security Council over the attack demanding accountability, according to SANA.

Israel’s “dangerous and hostile” actions would not have been possible without the support of its ally the United States, which protects it in the Security Council, it said.

The air strikes hit several Iranian positions near Damascus, and also targeted a research centre and a military airport west of the city of Homs where the Lebanese Shia movement Hezbollah and Iranians are deployed, the Syrian Observatory said.

One of the pro-government fighters killed was Syrian, while the rest were of other nationalities, its chief Rami Abdurrahman said.

“This escalation evokes extreme concern,” Russia’s foreign ministry said in a statement on Tuesday, adding such actions have the potential to destabilise the region.

Moscow put the death toll from Sunday’s attacks at 16.

Russia has managed to maintain close relations with Syria and Israel despite tensions between the neighbouring countries throughout the Syrian civil war as Russia’s military supports the Syrian state.

The latest incident comes after a series of similar Israeli air strikes over Syria.

The attack came a week after Israeli warplanes hit Syrian military positions near the Golan Heights in the country’s south, killing three soldiers and wounding seven others.

In recent years, Israel has carried out hundreds of attacks in Syria that it says have hit its regional arch-foe Iran and Hezbollah, which it calls the biggest threat to its borders.

Iran and Hezbollah are fighting on the side of President Bashar al-Assad in the Syrian war, and Israel says they are trying to turn Syria into a new front against Israelis.

The Syrian conflict has killed hundreds of thousands of people, forced millions to flee, and drawn in world powers since it started in 2011 with the brutal repression of anti-government protests.