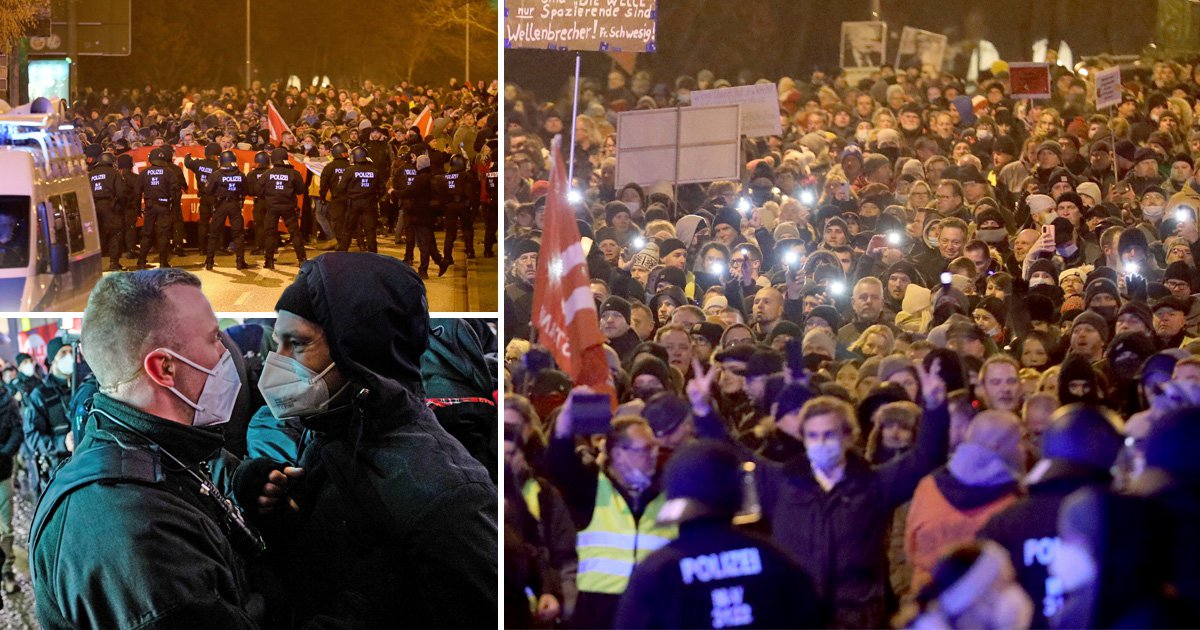 Anti-lockdown protests have flared again in Germany ahead of a debate on whether vaccines should be made mandatory.

Police officers in riot gear pepper-sprayed lines of demonstrators as they attempted to make their way down the street in the northern port city of Rostock.

After record case numbers in December, infections had been falling in Germany before Christmas but are surging again as the Omicron variant takes hold.

In response, Mr Scholz and the country’s 16 state governors made it mandatory for people to show proof of a negative test result or booster jab in order to go to restaurants and bars.

This is on top of the requirement to show proof of vaccination which has been in place for some time.

Almost 72% of Germans are currently considered ‘fully vaccinated,’ while 42.3 % have received an additional booster shot.

Lawmakers in the Bundestag are also due to debate whether the country should follow neighbouring Austria in forcing all eligible people to get the vaccine.

Mr Scholz has already signaled his support for a vaccine mandate but it is predicted that officials discussions make take several months, with the new rules unlikely to come in until June.

The looming mandate has been a rallying point for vocal anti-vaccine campaigners who have ratcheted up activity over the last couple of months.

Some recent demonstrations have turned violent, with protesters attacking police officers after being ordered to disperse.

There have also been tense scenes elsewhere in Europe, as people voice their opposition to new rules.

More than 100,000 people rallied in France over the weekend to oppose what they called the government’s plans to restrict the rights of the unvaccinated.

President Emmanuel Macron has admitted he wants to p*** off those who haven’t had their jabs by making their lives harder.

New rules are being introduced on January 15 that require individuals to prove they are fully vaccinated before they can eat out, travel on intercity trains or attend cultural events.