The currency of the rain-plagued Splendour In The Grass festival near Byron Bay this year was not a shiny wristband but a gumboot.

In the days before the festival, as someone who lives locally and already owns gumboots, I was moved to helping interstate visitors find suitable options. My teenage daughter, who associates wearing gumboots with the Northern Rivers floods earlier this year, was horrified. 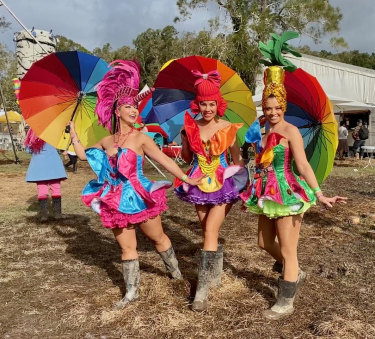 Revellers in gumboots at the Splendour In The Grass festival at Byron Bay.

“Do we have to wear them right from the start?” she asked. Luckily, my powers of parental persuasion are not completely exhausted as it turned out gumboots were needed well before getting inside the festival. The long narrow path from the shuttle bus stop to the entry gates, enclosed on either side by lush forest as well as festival fencing, was ankle-deep in mud.

After spending Saturday at Splendour looking at people’s feet (looking down ensured I didn’t go A-over-T with each step), I’d say 98 per cent of festival-goers had managed to source gumboots. Another one per cent had other boots that would have been fine in less trying circumstances, leaving the final one per cent in trouble, with a mix of never-to-be-worn-again regular shoes, crocs, plastic bags and bare feet. I even saw one lonely, long-ago abandoned thong. 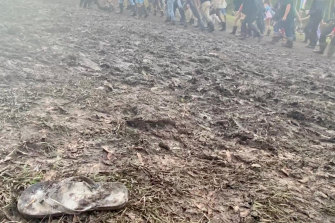 An abandoned thong in the mire at Splendour in the Grass.

It quickly became clear that not all gumboots are created equal. Trendy ankle-high versions lasted three steps before being filled with cold sludge and ill-fitted boots were more vulnerable to getting stuck. Over the day, I developed my gumboot-wearing technique (slower, shorter and lighter steps) and mud etiquette (avoiding spraying others by sloshing).

Knowing I had hole-free, well-fitted, calf-high gumboots meant I could enjoy the day despite the mud. The security my wellies provided enabled me to laugh at the muck rather than being cold, wet and possibly contaminated. My hole-free footwear meant I could tackle puddle mud and wet concrete mud rather than feeling defeated with each squelchy step.

This got me thinking that having gumboots in a world that had completely gone to … mud … feels a lot like a metaphor for our troubled times. Like having housing from which I’m not likely to be evicted on the whim of a landlord wanting higher rent. Or not having the impossible decision between rebuilding on a floodplain versus starting again somewhere else.

Having well-covered feet felt like a gig economy worker who’s paid enough for each job that they can cover sick days, superannuation and other basic conditions that are enshrined for most in workplace law. Having good gumboots at Splendour felt a lot like having a prime minister who believes in democracy rather than theology.

Gumboots. Helpful in a flood, at a music festival and as a metaphor for life.