Commuters on the Frankston line and route 16 trams, which run through the city, St Kilda and Toorak are the worst offenders when it comes to wearing masks incorrectly.

Across the board, commuters were proportionally less compliant with mask rules on the tram and train networks in January compared with November last year.

The proportion of commuters wearing masks incorrectly on trains has increased from 12 per cent in November 2020 to 23 per cent in January this year.

It comes as a leading epidemiologist called on the Andrews government to reconsider its policy of mandatory mask wearing on public transport following high rates of poor compliance.

Victoria recorded no new local cases of coronavirus for the 42nd day in a row on Friday.

The NSW government has removed the requirement to wear masks on public transport, but masks are still being strongly recommended by the state’s health authorities.

This was followed by those on the Sunbury, Pakenham and Belgrave lines, where 19 per cent wore masks the wrong way.

On the tram network, 21 per cent of commuters on route 16 did not wear masks correctly, followed by route 11 and route 78 trams, on which 16 per cent of passengers did not wear them the right way.

Deakin University chair of epidemiology Catherine Bennett said the Andrews government should reconsider making masks mandatory, due to the risk of “burning up public good will” in taking the strict measure when there was no community transmission in the country. 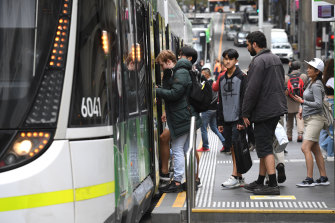 Less people are wearing masks on public transport, which is still mandatory.Credit:Joe Armao

“I think if we didn’t mandate masks now on public transport, but made it clear that it’s one of the first things you do at the first sign of risk increasing … then we might get better buy in there,” she said.

“It is vital that we all continue to follow the official advice from health authorities and wear masks while using public transport – particularly as more people get on board and crowding starts to be an issue again.

“Authorities can do more to ensure the messaging is consistent and clear, including signage and more announcements in stations and on vehicles, which have been patchy at times.

“Given public transport is increasingly used by large numbers of passengers at all times of day, not just peak hour, the government should continuously review loads and boost off-peak services where needed to relieve crowding.”

A government spokeswoman reiterated that masks were key to infection prevention, but would not say whether there were plans to tweak the policy.

“We know the risk is far from over but thanks to the incredible work of all Victorians, we’re continuing to open up and see the Victoria we all love, return to life again,” she said.

“Victorians no longer have to wear masks in retail settings – but will still need to carry one with them at all times to wear on public transport, in ride-share vehicles and taxis and in sensitive settings such as aged care facilities and hospitals.

“Masks are an important part of our ongoing infection prevention and control strategy, which also includes hand hygiene and physical distancing requirements.”