Listening to Alan Tudge’s criticisms of the draft school history curriculum brought home the reality that Australia’s traditionally moronic federal election season can’t be too far away. As we’ve been made painfully aware, the federal Education Minister wants a national curriculum that presents a positive view of Australian history.

Last month he gave the current draft a “C”, claiming it would teach students a “negative, miserable view of Australia,” one that downplays the nation’s Western and Christian heritage. Future generations would be unwilling to defend the nation against threats to its liberal democracy, he warns. I’m likewise worried about research indicating young people aren’t sold on the relative merits of democracy. What I’m not sold on is Tudge’s solution. 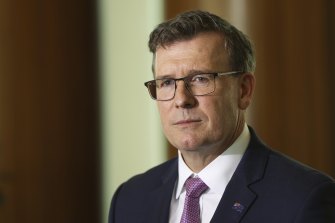 This draft curriculum is the work of an independent authority that presumably goes out of its way to recruit masochists and professional fall guys prepared to be publicly flogged for sharing their pedological expertise. Because as night follows day, the authority’s recommendations for teaching history were always going to trigger a fresh round in the culture wars with “Anzac Day” lobbed in like the grenade it’s become. To gauge how intense the battle is likely to get, note the volume of childlike superlatives in Tudge’s remarks last week: Australia is “one of the most wealthy, freest, most egalitarian and most tolerant societies that has ever existed anywhere in the history of the world”. There’s a reason that millions of people want to come here! Of course the nation has dark chapters in its history with First Peoples but, overall, yay Australia!

I’ll venture that gaining a rich understanding of the past spills beyond the narrow frame of reference of either “yay” or “nay”. Which doesn’t preclude the possibility Tudge might be right in saying the draft curriculum is skewed toward negative narratives about Australian history. I note the healthy disagreement among historians on the substance of his claims. My lay person’s response to specific examples can be taken with many grains of salt, but let’s have a go. First, year 10s will be taught in “Rights and freedoms (1945 to the present)” about “the background and causes, such as discriminatory legislation and policies, to the struggle of First Nations Peoples of Australia for rights and freedoms”. One conservative think-tanker says this is a bad thing. It seems to me a necessary thing.

What about educating all students on “how Indigenous history, culture, knowledge and understanding can be incorporated into teaching core scientific concepts”? I don’t know. But as an idea it seems infinitely more constructive than one positing the teaching of maths is
systemically racist – a view held by at least one member of the Aboriginal and Torres Strait Islander
advisory committee who advised on the draft curriculum, according to reports in the “yay Australia!” media camp.

“Unlike our American cousins, Australians are still grown-ups.”

And as for the positive strands of Australian history, I agree with Tudge they should be celebrated. One strand might start with the Australian Vinegar Hill rebels of 1804, the convict rebellion imbibing the spirit of the Irish independence movement – Western? Check. Christian? Check. And progress from there to the stonemasons’ struggles for an eight-hour working day in the late 1800s; the establishment of the conciliation and arbitration system in 1904 that entrenched the notion of an independent umpire resolving disputes about wages and conditions; and the 1907 Commonwealth Conciliation and Arbitration Court’s “Harvester” judgment on a “basic wage” that enshrined the radical idea workers are people too. And you can also consult the ACTU website for more on Australia’s proud legacy as the land of the fair go, and the obsessive attempts of successive Liberal leaders, schooled in the gentle philosophy of unmitigated union hatred, to wind back the gains.

But such partisan digs can’t smother my unease about how contested everything that’s taught in the
classroom has become. Even maths; the learning of times tables is a political issue, apparently. Let’s not even mention phonics – oops, too late.

The reason Tudge will amplify his cries about black-armbandists is the same reason the Republicans knew they were on a winner attacking “woke” schools in the recent gubernatorial race in Virginia: parental anxiety about schools becoming hotbeds of social engineering and extremist agendas on race, and gender identity, is real, easily stoked and while drastically overblown not entirely without foundation. I don’t have space to go into the wild machinations behind the upset in Virginia and lest
we forget, unlike our American cousins, Australians are still grown-ups. (One political ad in Virginia featured a mother distressed because her son’s reading assignment featured “explicit” material; the text came from Toni Morrison’s Beloved.)

But it’s also true campaigners who go looking for ideologues let loose in classrooms tend to have little trouble finding them. It is why the “yay Australia” brigade keeps twinning the conversation about the draft curriculum with classroom atrocities such as the suburban high schools in Melbourne where boys were made to stand and be publicly humiliated for being male, white, Christian and so on, and the hippie primary school in Sydney where kids made posters proclaiming “stop killer cops” and “pigs out of the country”. It is why we’re hearing a constant background rumble from conservatives about the need for “back to basics” teaching and for more parental choice about what kids are taught. Some of these complaints are legitimate. Most are attempts to incite moral panic.

In fact, the main vibe I’m picking up from Tudge is nervousness.