Thousands of ticket-holders will be blocked from the NRL grand final in Brisbane and other matches under new virus restrictions in Queensland.

Several large sporting events, including Sunday’s NRL grand final at Suncorp Stadium, have been affected by the restrictions, which come into force from 4pm on Thursday as a result of COVID-19 cases spreading through the south-east Queensland community. 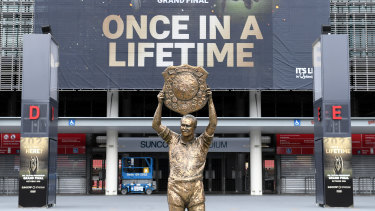 Thousands due to attend the NRL grand final on Sunday will have their tickets invalidated due to COVID-19 restrictions.Credit:Getty

Venues, including stadiums, will have to operate at 75 per cent capacity to ensure social distancing during matches.

Suncorp Stadium has a capacity of 52,500, and can sometimes hold slightly more with seating modifications.

The historic match was a sellout, with tickets sold in two main releases over the past few weeks.

The changes mean 25 per cent of people who have bought tickets – about13,000 people – will be told they will no longer be able to attend.

The NRL has confirmed ticket provider Ticketek will automatically refund and invalidate the tickets of the 25 per cent of people in each of the two major allocations who bought their tickets last.

NRL Chief Executive Andrew Abdo said they believed a “first in” policy was the fairest way to deal with the matter.

“I want to acknowledge fans who will now miss out on attending the Grand Final,” he said. “I know you had been counting down the days to a once-in-a-lifetime experience and this will be difficult news to take, but this decision is out of our hands.”

Mr Abdo said he understood the decision to reduce capacity in the stadium despite the fact it would disadvantage thousands of fans.

“Suncorp Stadium is one of the best venues in the world and with 39,000 passionate fans at the stadium, I’ve got no doubt there will be a great atmosphere on Sunday night,” he said.

Queensland Premier Annastacia Palaszczuk said the measure was necessary to help stop any further spread of the virus.

“That is going to be unfortunate for people and, you know, it’s sad, but this is the health advice,” she said.

Chief Health Officer Jeannette Young said it was not her advice at present to cancel or move the grand final or any other sporting fixture, but warned that could change if case numbers got out of hand.

“If you go back and look at our roadmap, we’ve always done this … it’s consistent with what we’ve done every other time,” Dr Young said.

She said there was no inconsistency with allowing tens of thousands of people to attend a sporting match despite pubs and cafes having to strictly limit the number of patrons allowed in.

“[In stadiums] they are ticketed and seated, so you know where each person is, they’ve got masks on when they’re not seated, so we know the risk is when they get up to leave and mingle,” she said.

The Wallabies confirmed via social media on Thursday that the two matches scheduled for Saturday on the Gold Coast – Argentina vs Australia and New Zealand vs South Africa – would also be reduced by 25 per cent using the first-in model the NRL is using.

Cbus Super Stadium has a capacity of 27,400, meaning up to 6850 people would have to be refunded, although neither match is understood to have been a sellout.