The Foreign Secretary and the trade minister are engaged in a brutal struggle to stay in the contest with just hours to go until the dramatic fifth ballot in the Commons.

Accusations of dirty tricks are swirling, with claims that politicians tactically ‘lending’ votes to weak opponents are behind the bewildering shifts in support over the past week.

But Ms Truss and Ms Mordaunt were just six votes apart in the last round, and are now scrapping for Kemi Badenoch’s 58 backers following her elimination from the race yesterday.

Ms Truss appears to have the momentum, having surged into contention after a relatively slow start. But Ms Mordaunt has been fighting hard to stay in contention.

Rishi Sunak remains the front runner, having topped every round so far – although he is still short of the 120 votes needed to guarantee going forward to the run-off ballot of Tory members.

But Ms Truss has warned him against engaging in ‘dirty backroom deals’.

Her backers fear the former chancellor’s team may try to ‘fix’ the final vote today to ensure he does not face a candidate from the Tory Right in the run-off decided by party members.

They point to a YouGov survey showing that – head to head – she would beat Mr Sunak by a comfortable margin of 54:35.

Ms Truss picked up 15 votes to command the support of 86 Tory MPs on Tuesday, after 31 votes were freed up by the elimination of Tom Tugendhat a day earlier.

Ms Mordaunt increased her share by 10 to sit on 92, while Mr Sunak gained an extra three votes to put him in 118, just shy of the number effectively guaranteeing him entry to the final phase.

Ms Badenoch came last in the ballot on 59 votes, with Ms Truss believed to be more likely to pick up a significant number of those votes than Ms Mordaunt.

A former minister also suggested that Mr Sunak, who he is backing, would rather face Miss Mordaunt. ‘Rishi vs Liz is going to be the most feared contest,’ said Chris Skidmore. ‘That will be the battle for ideas, a battle of personalities.’ 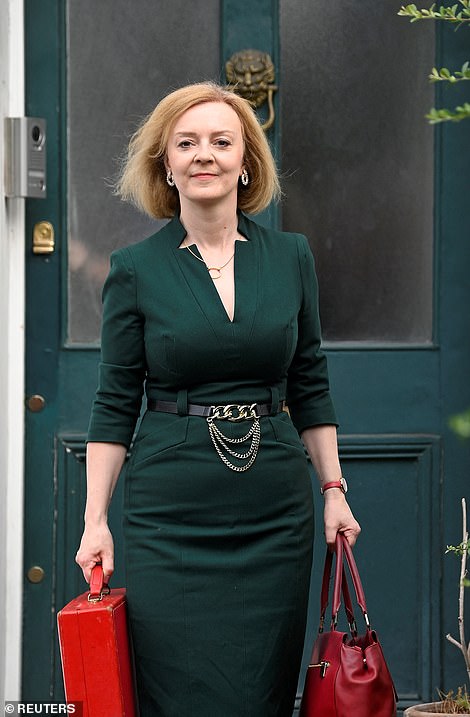 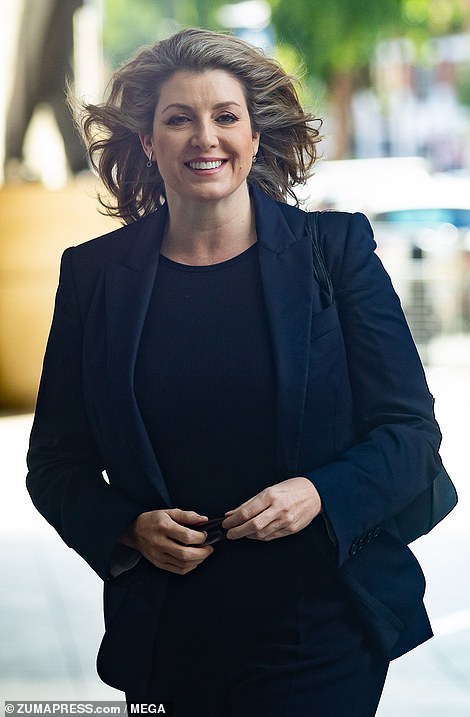 Liz Truss (left) enjoyed a surge in support in yesterday’s penultimate leadership ballot, and is within touching distance of second-placed Penny Mordaunt (right) 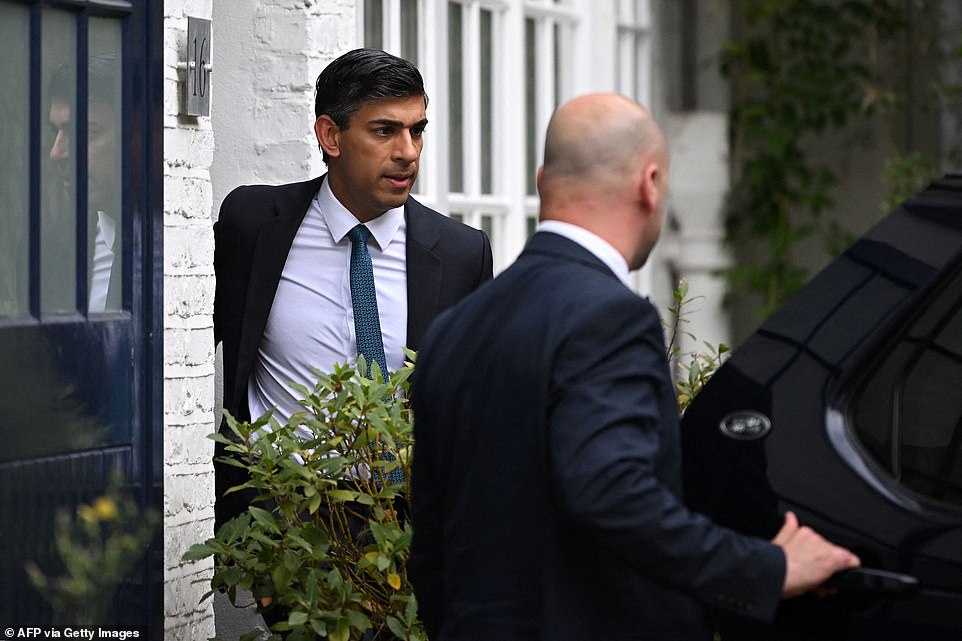 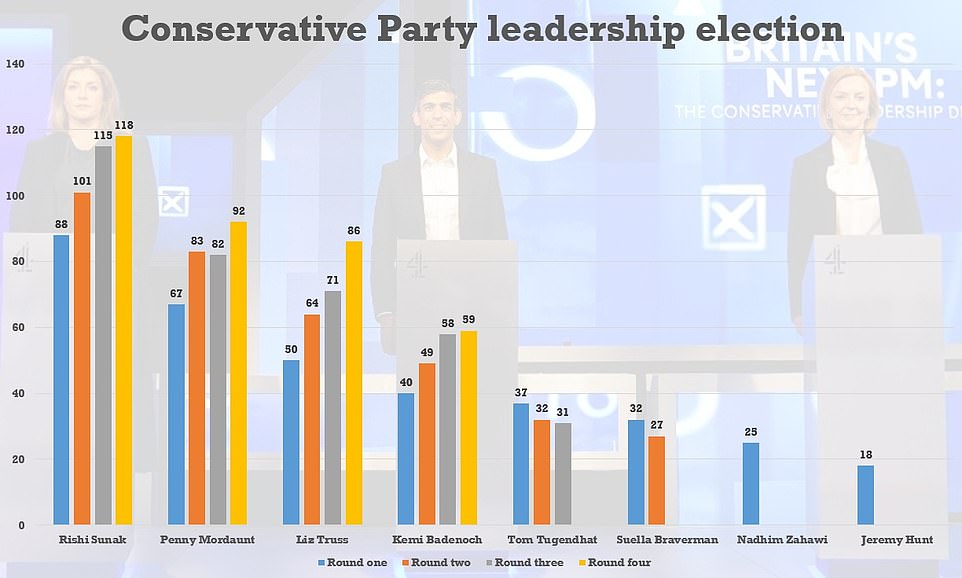 Today – A fifth ballot of Tory MPs will decide the final pair, ending the parliamentary phase of the contest.

Tomorrow  – MPs will head away from Westminster for their summer break.

Late July and August – CCHQ will assume responsibility for leadership election and will send out ballot papers to around 200,000 Conservative Party members. The Tory grassroots will be asked to decide between the final two candidates, with hustings events to be held across the UK.

5th September –  The result of the membership ballot is announced, with the candidate receiving more than 50 per cent of the vote being declared the new Tory leader and Boris Johnson’s replacement as Prime Minister.

6th September – The new Tory leader is likely to be formally appointed as PM during a visit to the Queen at Buckingham Palace.

7th September – The new PM is set to be quizzed in the House of Commons in their first ever Prime Minister’s Questions.

An ally of Ms Truss said her team was working flat out to secure every vote, adding: ‘The Tory Party has had more than enough of macho politics done in dirty backroom deals. We don’t want to see that again tomorrow.’

Another source said Ms Truss was ‘in the driving seat’ although ‘there’s a lot of work still to do’.

Yesterday’s vote left outsider Kemi Badenoch as a potential kingmaker after she was knocked out. Rival candidates were battling to secure the crucial backing of her 59 supporters.

Mrs Badenoch is on the Tory Right and the Foreign Secretary’s team believe at least 22 of her supporters are sympathetic to Ms Truss’s cause.

In an early sign of success, defence minister Leo Docherty switched from Mrs Badenoch to Ms Truss last night, saying: ‘I’ve seen at first hand her deep experience and sound judgement and know she has a credible plan.’

Ms Mordaunt has been making early-morning calls to supporters of Tom Tugendhat and Kemi Badenoch, who have been eliminated from the leadership race, in a last-ditch attempt to gain the support needed to secure a place in the run-off.

A campaign source said: ‘Today is about continuity versus change for the Conservative Party.

‘Penny’s been speaking with colleagues already this morning and so many of Tom and Kemi’s backers are calling out for change.

‘As the only one not in Johnson’s cabinet, Penny is the sole MP left in the race who offers a genuine fresh start. Not every candidate would win an election, but time and time again the polls show that Penny is the candidate Labour fear the most.

‘MPs have a choice today – the same old or a new start for the Conservative Party.

‘Their colleagues, party members, and voters across the country are crying out for something new but only Penny Mordaunt can deliver that.’

‘I think she has the most exciting plan for economic growth and she set out a compelling plan to lower the burden of taxation.’

‘I have very high regard for Rishi Sunak,’ he insisted. ‘I am here to make the case for what I think is the right future step in terms of where we go from here and that is for a Government led by Liz Truss.’

A Truss campaign spokesman said: ‘Now is the time for the party to unite behind a candidate who will govern in a Conservative way and who has shown she can deliver time and again.

‘Liz has a bold new economic agenda that will immediately tackle the cost of living crisis, boost economic growth and continue leading the global fight for freedom in Ukraine.’

But the contest has been overshadowed by fears it could be undermined by ‘vote lending’ between the rival teams, with suspicions focused on Mr Sunak’s campaign aide Gavin Williamson. Mr Sunak’s team deny underhand tactics – and insist that Sir Gavin has no formal role.

Tory MP Steve Baker, a Truss supporter, said he believed individual MPs were ‘occasionally voting tactically – which they are entitled to do’ rather than doing deals. 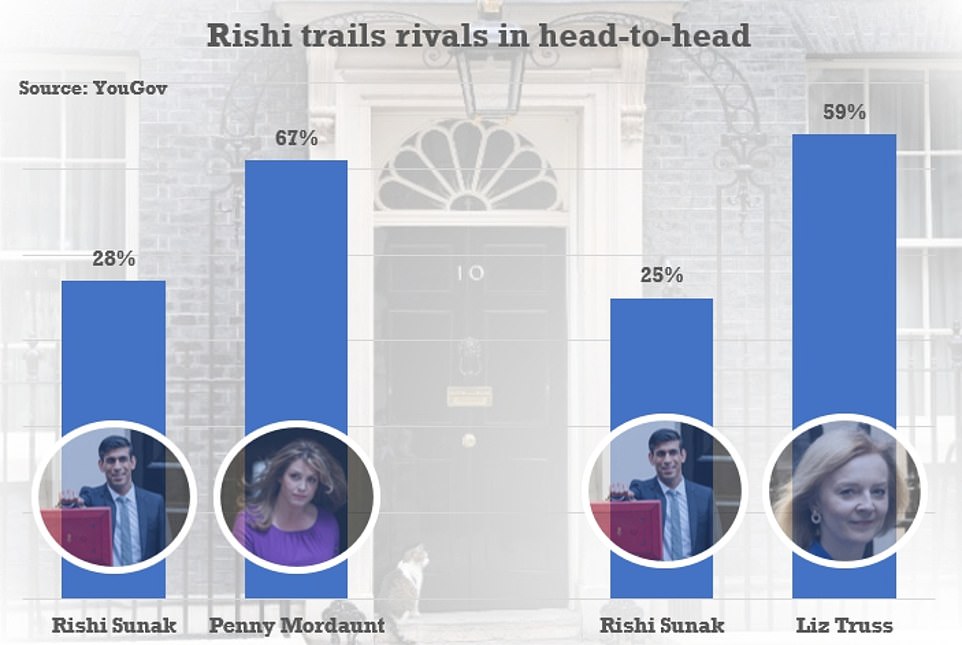 Either Ms Truss or Ms Mordaunt would start a run-off campaign from a good position, as a YouGov survey has indicated they could comfortably defeat Mr Sunak 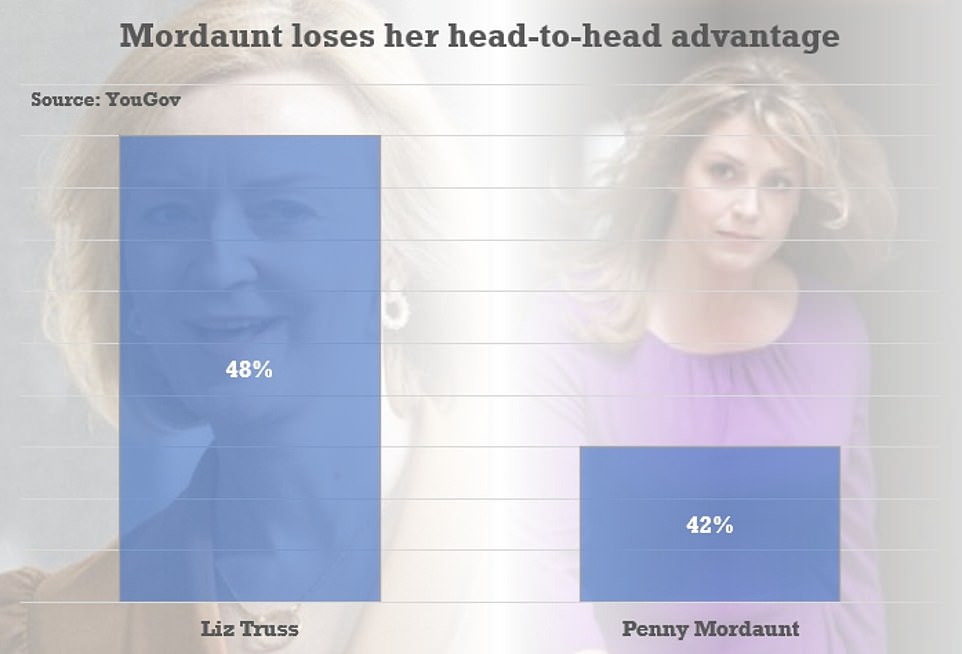 YouGov research suggested that the trade minister has fallen back after sparking an initial wave of enthusiasm among activists. The Foreign Secretary now has a 48 per cent to 42 per cent advantage when put up against Ms Mordaunt

Another Conservative MP said: ‘There is a concerted effort I think to try to make sure that Rishi doesn’t face Liz in the final.’

‘There’s clearly been some transfer of votes, presumably from Rishi to Liz,’ he told LBC Radio. ‘Rishi just reallocated some. He’s got his four or five chief whips that he has in a boiler room to reallocate them. He wants to fight Liz because she’s the person who will lose the debate with him.’

A Sunak-supporting MP denied wrongdoing, saying: ‘We are encouraging every colleague who wants Rishi to win to vote for him.’

Yesterday’s result left the contest finely poised with Mr Sunak gaining only three supporters after the votes of moderate Tom Tugendhat were redistributed. This left him on 118, well ahead of Miss Mordaunt, who picked up votes to move to 92, with Ms Truss narrowing the gap on 86.