The last of the headhunters: Indian tribe who once decapitated people as a gruesome rite of passage will take their culture to the grave as their final members die

Stunning images show the last frail members of a tribe that used to behead people and parade their bloodied skulls around as a gruesome rite of passage.

The final Konyak headhunters, pictured with jewellery crafted from dead animals and sporting facial tattoos marking their battlefield skill, are now set to take their unique culture to the grave when the last member dies.

They still live in their ancient homeland in mountainous Nagaland, north-east India, but tribal members are now aged in their eighties, with some even claiming to be more than 100 years old.

The villagers used to hack skulls off a person’s body and display them in pride of place in the village, celebrating the killer’s achievement.

However, despite their fearsome reputation, the practice was abandoned in the 1960s when they were converted to Christianity. This means that as this generation passes away, the last of headhunters will go with them.

A book, named ‘The Konyak: Last of the Tattooed Headhunters’, tries to tell the story of their lives through the great-granddaughter of prominent tribal member Ahon. Part of it focuses on how the body is treated as a canvas, with inscriptions on the skin representing a rite of passage or, in some cases, every kill they have made.

These astonishing images were taken by Polish photographer Wiktor Stadniczenko, who travelled to their homes and even drunk tea with them around the campfire. 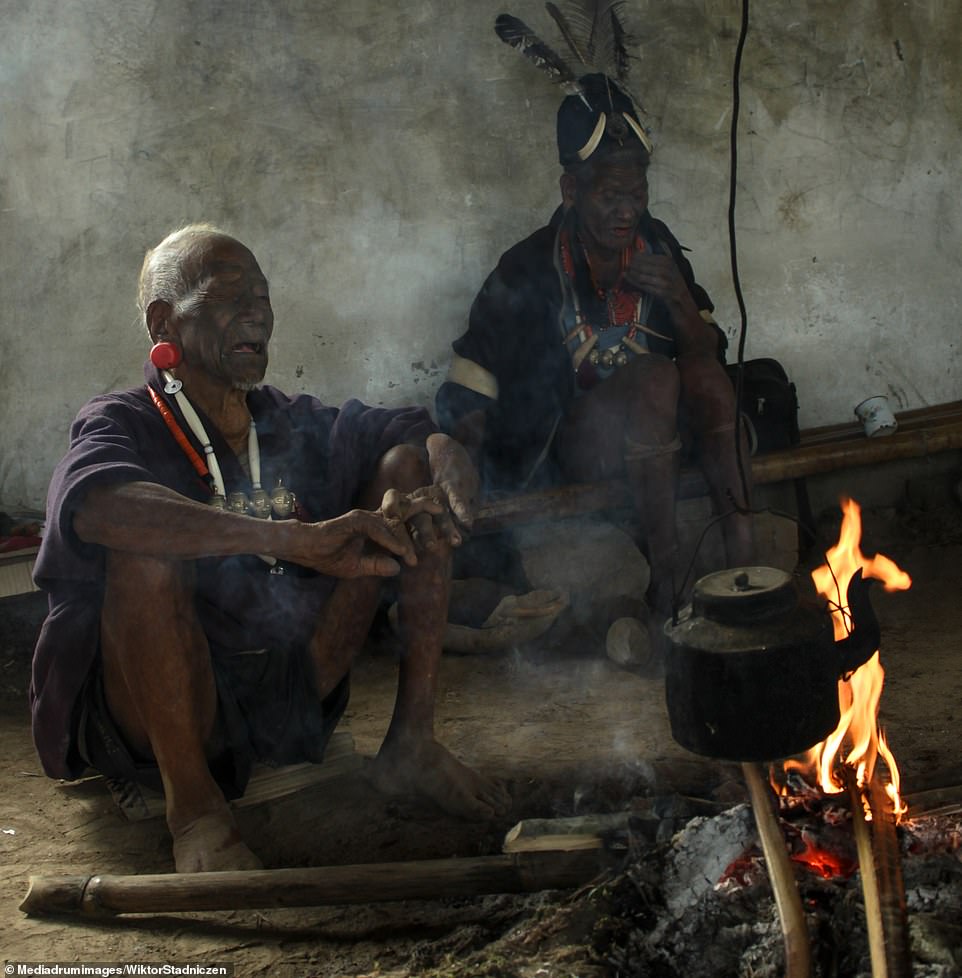 Stunning images show the last surviving members of the Konyak tribe that used to behead people and parade their bloodied skulls around as a gruesome rite of passage. (Pictured) The man appears to be singing as he stares into the dying flames 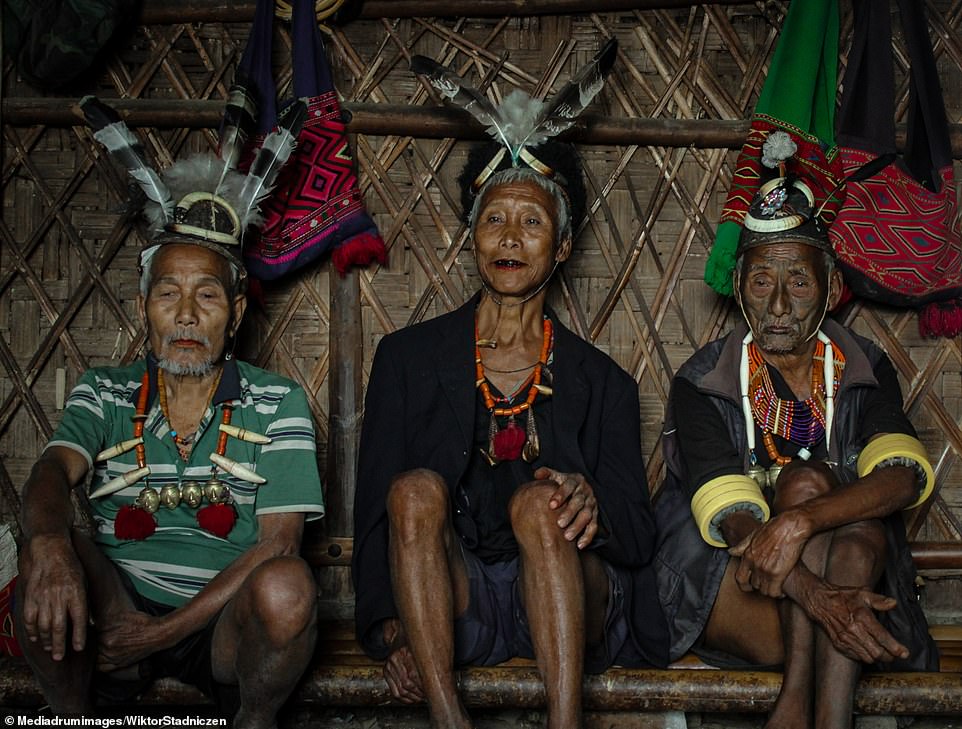 Polish photographer Wiktor Stadniczenko travelled deep into their mountainous homeland in Nagaland, north-east India, to drink tea with them and capture these fascinating images. (Pictured) Bone and goat skin hats, a valuable commodity and symbol of honour, are donned by these tribespeople. They are also shown wearing modern jackets and shirts suggesting this tribe lost its untouched nature long ago 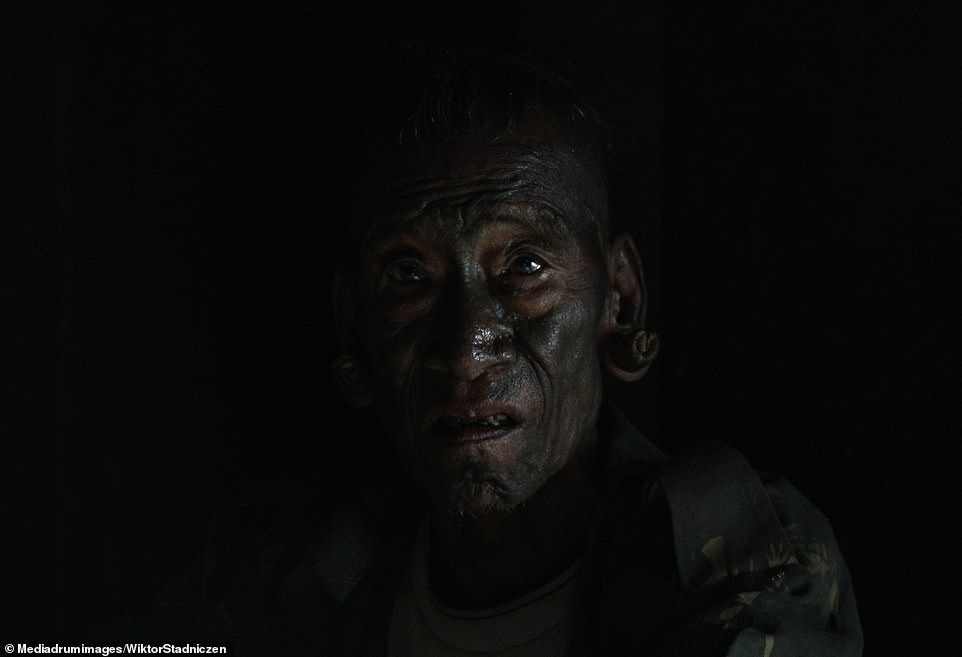 Bodies in Nagaland are regarded as a canvas, and new tattoos are added to mark a great deed or service. The tribe used to hunt heads but abandoned the practice in the 1960s after being converted to Christianity 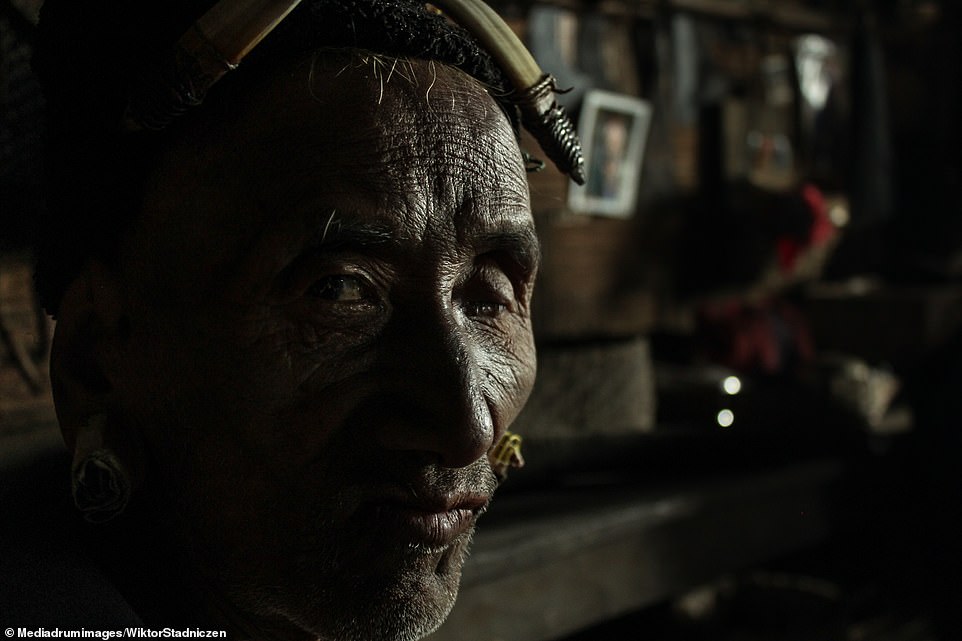 The crown of bones on this man’s head is said to be from an animal that he hunted and killed. When putting on tattoos, some members of the tribe get a new one for every animal that they kill 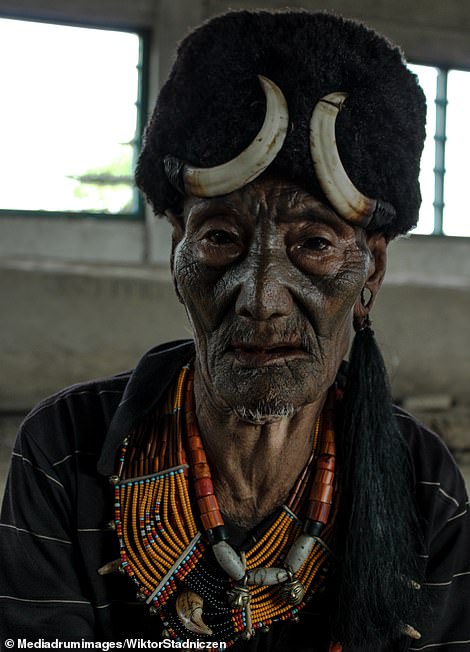 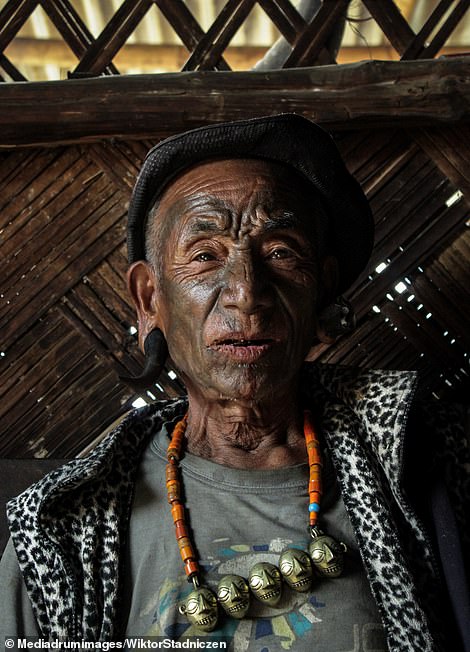 Ornate jewellery strung around the neck of this elderly Konyak warrior (left). He also has facial tattoos which may mark out his skill on the battlefield. The second warrior has a necklace of heavy brass skulls (right) which mark him out as a great warrior 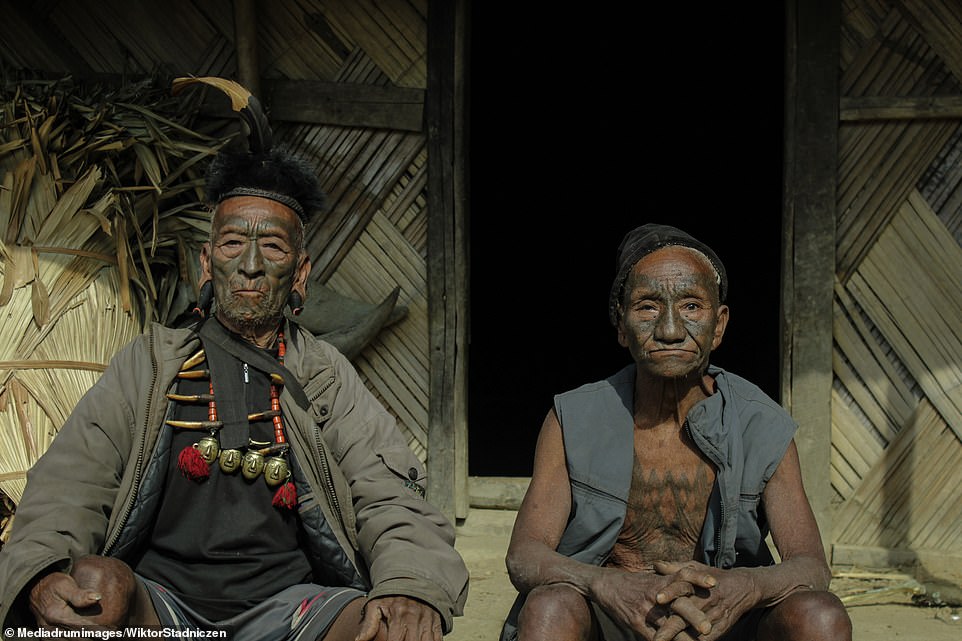 Heavy brass heads on the necklace of this man (left) suggest he was a fierce warrior. Tattoos, also sported by his companion, may also suggest bravery on the battlefield in the tribe or could mark out every time they made a kill 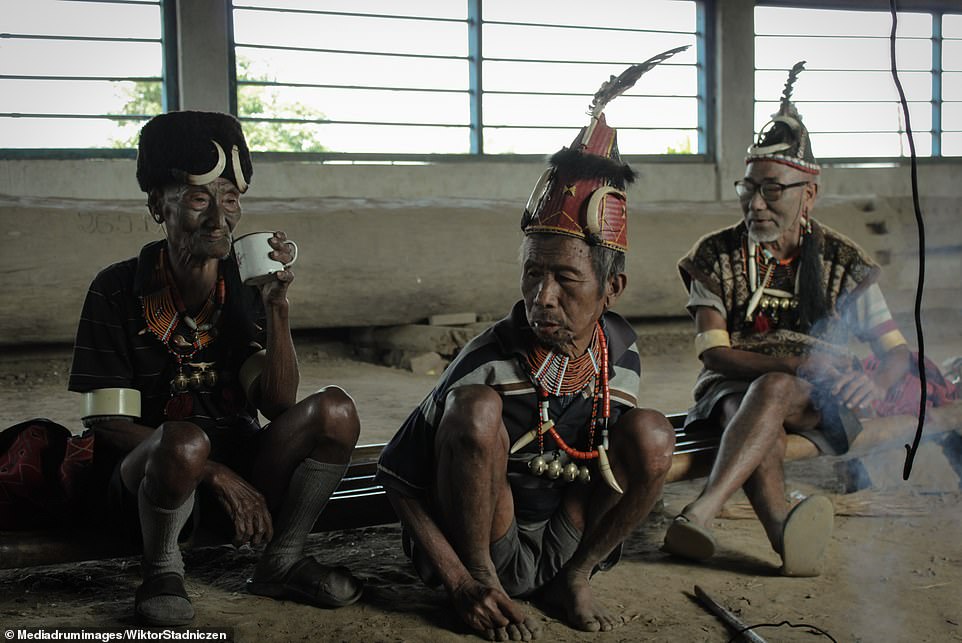 Three tribal members sit around the campfire. A touch of modern-life is given away as one is pictured wearing glasses. After a beheading, the Konyak used to give the head pride of place in the village. A book, named ‘The Konyak: Last of the Tattooed Headhunters’, tries to tell the story of their tribal life through the great-granddaughter of prominent tribal member Ahon 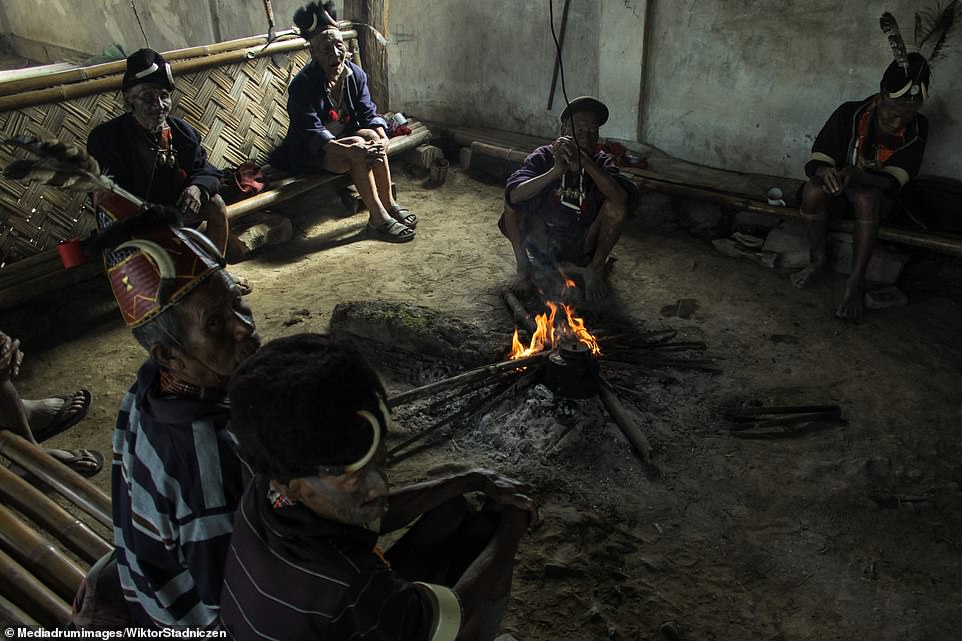 The Konyak still have a rudimentary life with open fire huts made of bamboo available for them to use. Here a camp fire is seen burning as seven elders sit around it. Some also have featheres stuffed into their hats which are decorated on the front with what appear to be boar horns 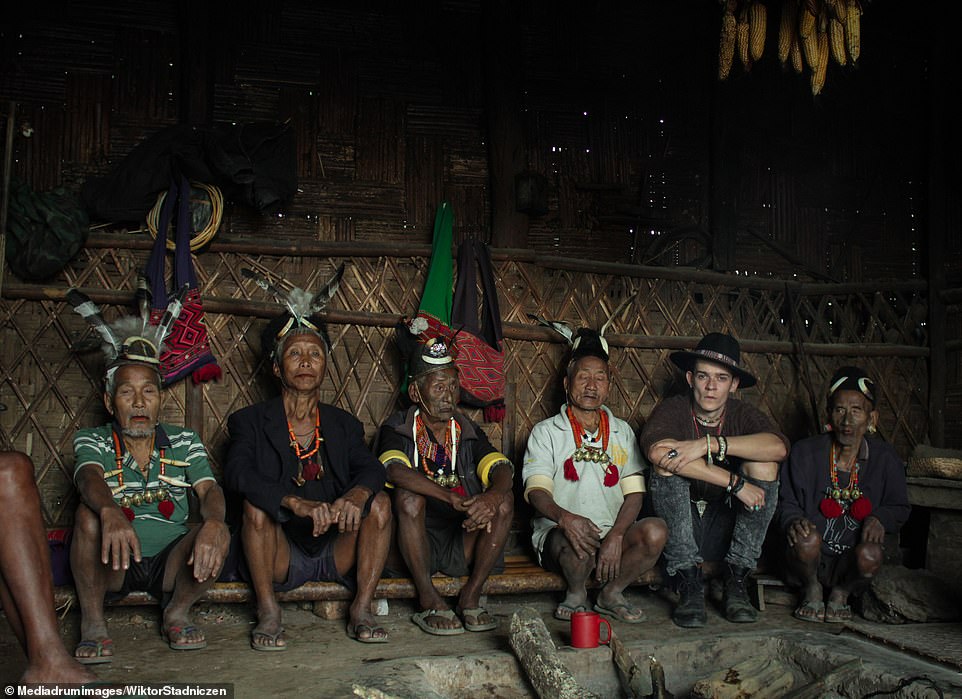 Photographer Wiktor Stadniczenko, who travelled to meet the tribe, is pictured here with tribal members. The tribal members are seen wearing flip-flops and modern shirts, alongside their traditional attire, while the photographer wears a shirt and ripped jeans 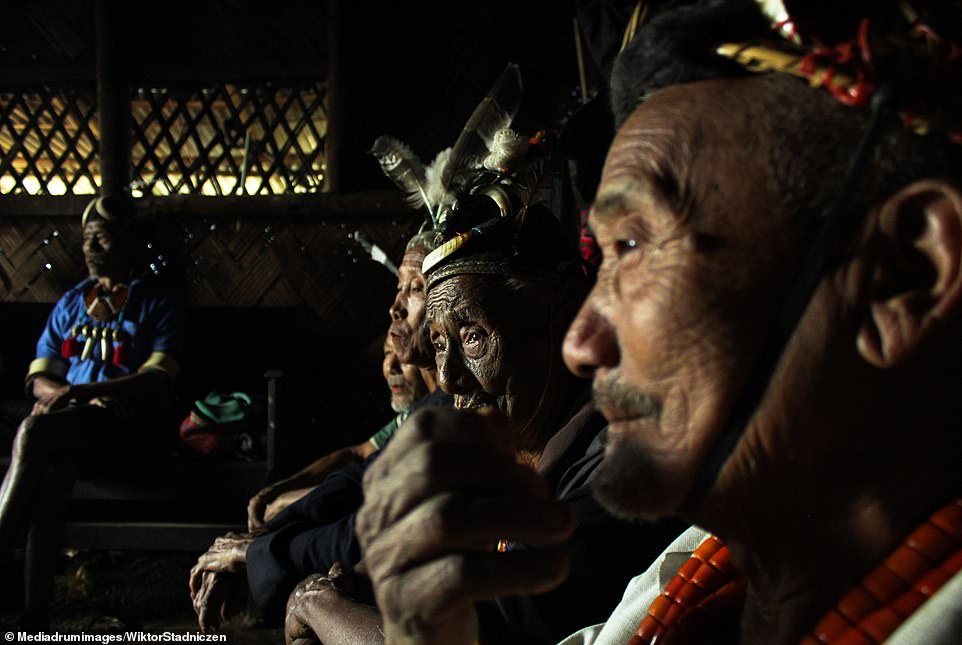 A side profile of several tribal members in a straw hut. Now that they are elderly, the members spend much more time sitting around the open fire and drinking rum and black tea 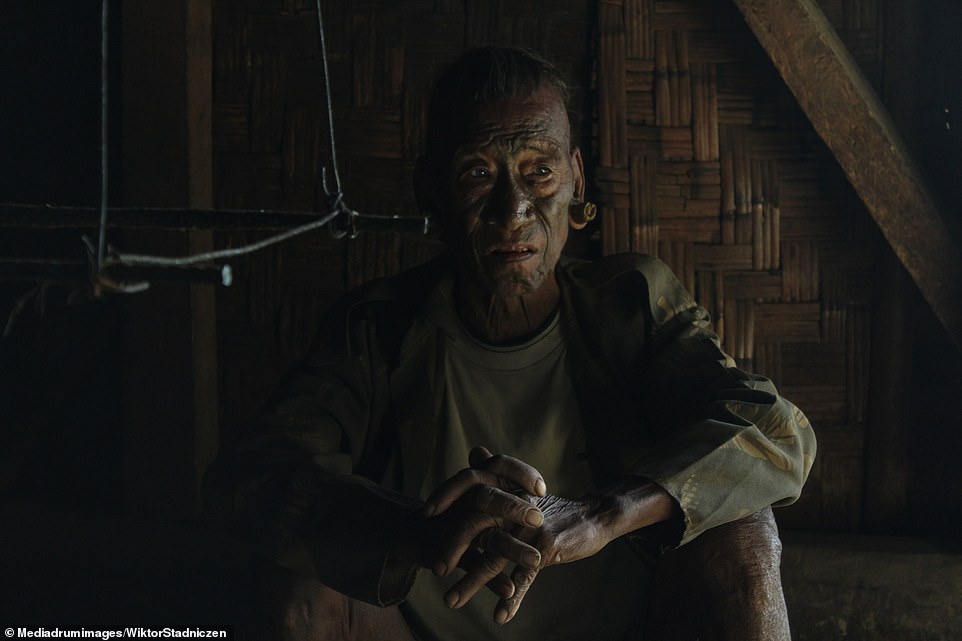 A man pictured inside the bamboo hut with large wooden objects in his ears. Many members of the tribe have now reached eighty, with some claiming they are already over a hundred years old 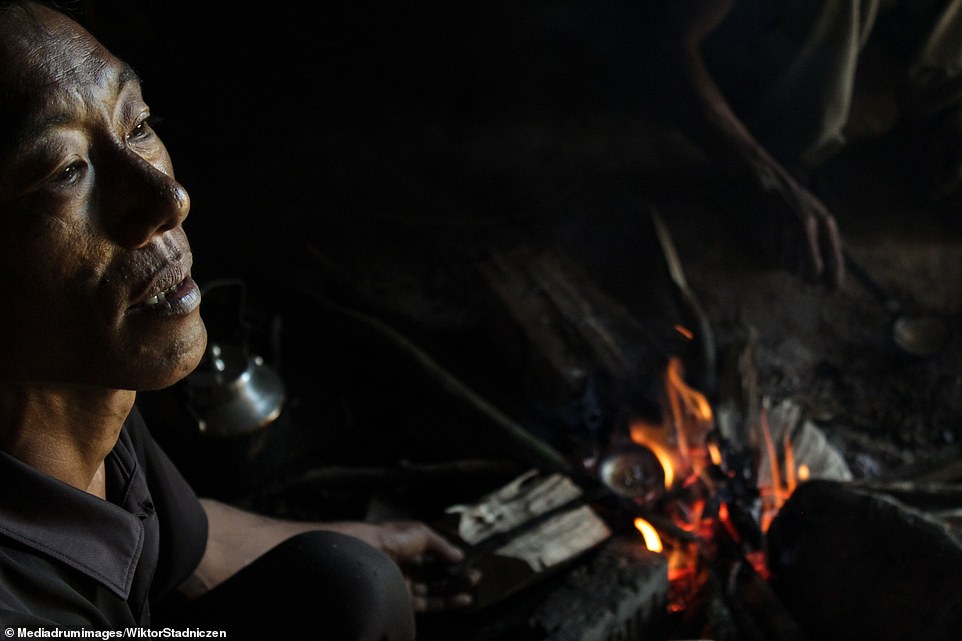 The tribal tradition of headhunting continued unti lthe 1960s, although it was stopped with a change of religion. Almost all the community have converted to Christianity and now express remorse about their headhunting past 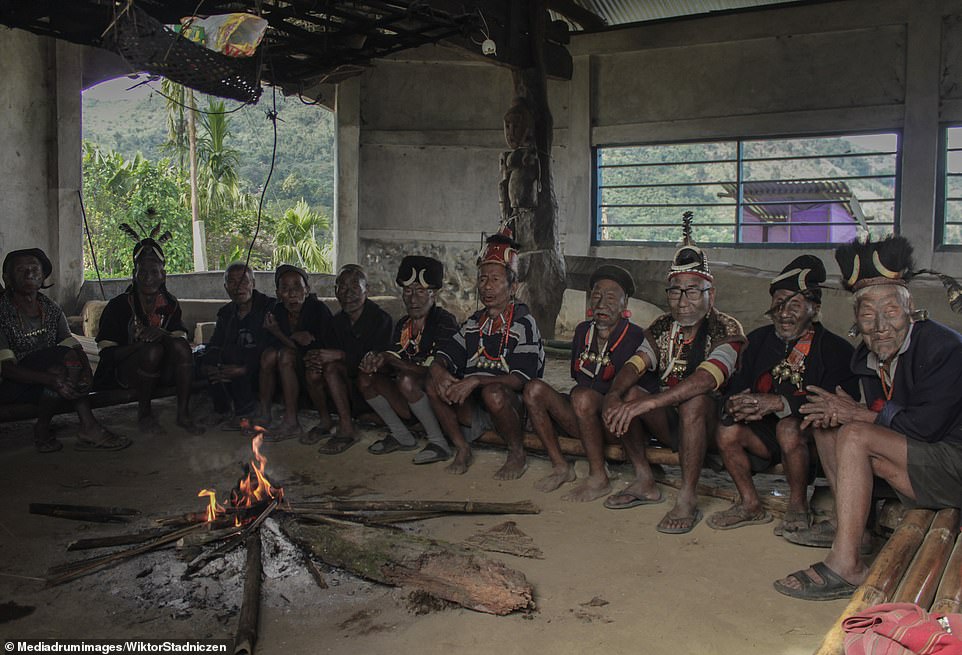 A group of 11 tribal members sit together on a wooden bench around the fire. Astonishing images in a book about them record the tribe’s body beautification process – a vanishing practice where tribe members adorn their bodies with distinctive facial and body tattoos.