Las Vegas/Washington: US President Donald Trump has blasted coronavirus expert Anthony Fauci as a "disaster" in a conference call with campaign workers and sought to reassure them he still has a pathway to win on election day despite slipping poll numbers.

Speaking from his signature hotel in Las Vegas, Nevada, before he leaves for two rallies in Arizona, Trump took his frustration out on Fauci midway through a call intended to buck up his national team of campaign workers. 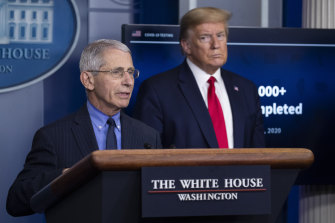 Trump and Fauci, a member of his coronavirus taskforce, have been at odds over how best to handle a pandemic that has killed more than 219,000 people in the United States and weakened the President's bid for re-election on November 3.

Fauci openly complained about being cited in a Trump re-election campaign ad and said in an interview broadcast on Sunday night by CBS' 60 Minutes that he was not surprised that Trump himself contracted the virus.

Trump, whose rallies include many supporters not wearing masks and standing shoulder to shoulder, said Americans were fed up with pandemic restrictions. The campaign allowed reporters to listen to the call.

"People are saying, 'Whatever. Just leave us alone.' They’re tired of it. People are tired of hearing Fauci and all these idiots … Fauci is a nice guy. He’s been here for 500 years," Trump said.

Trump suggested he had avoided firing Fauci because of the negative blowback he would receive.

Fauci, 79, is one of the most respected scientists in the United States and has served under Republican and Democratic presidents. He has been director of the National Institute of Allergy and Infectious Diseases since 1984.

Our weekly newsletter will deliver expert analysis of the race to the White House from our US correspondent Matthew Knott. Sign up for The Sydney Morning Herald‘s newsletter here, The Age‘s here, Brisbane Times‘ here and WAtoday‘s here.