Washington: At one point, it was hard for Fox viewers to avoid Rudy Giuliani, Sidney Powell and Jenna Ellis.

Since the November 3 election, the Trump-associated lawyers were an almost-daily presence on Fox shows arguing that the President had been robbed of a second term by a fraudulent process that they claimed they would soon have the evidence to reveal. 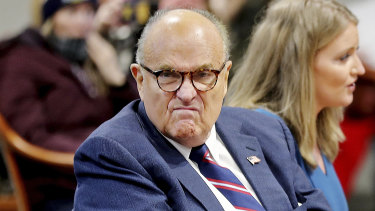 Rudy Giuliani, President Donald Trump’s personal frowns at a photographer at a hearing about election fraud in Michigan in December.Credit:The Grand Rapids Press/AP

But Giuliani and Powell have not appeared on any Fox cable news show in more than a month, according to a review by The Washington Post. Giuliani's last appearance was December 12 and Powell's on December 10, on Lou Dobbs Tonight, a show that was once a regular vehicle for both her and Giuliani. Ellis has only appeared once on the networks since early December.

In November and December, all three were very frequent guests on Fox News and Fox Business Network shows, sometimes doing double-duty, as Powell did in appearing on shows hosted by Lou Dobbs and Sean Hannity on the same night – even though she had already been booted from the Trump campaign's efforts. Ellis appeared on three Fox News Media shows on November 20.

The network would not comment on the trio's absence. But the timing of their disappearance aligns with the first legal pushback from a pair of voting-technology companies that say they've been falsely smeared by baseless conspiratorial claims of election fraud by President Donald Trump's allies. 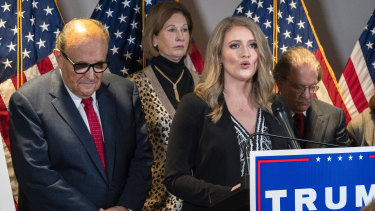 On December 10, a lawyer for Smartmatic sent a letter to the general counsel for Fox News Media demanding that Fox retract and apologise for "[publishing] and [republishing] dozens of false and misleading statements regarding Smartmatic" in the weeks following the presidential election.

The legal demand letter prominently cited "demonstrably false information and defamatory statements about Smartmatic" that were made by guests Giuliani and Powell on shows hosted by Dobbs and Maria Bartiromo. Ellis was not mentioned by name in the letter.

The three lawyers had all appeared regularly on shows hosted by Bartiromo, the long-time financial journalist who has become a reliable supporter of the President and has suggested to viewers in post-election shows that Trump could still manage to claim a second term.

Dobbs, meanwhile, had promoted Powell's last appearance by calling her florid claims of a global conspiracy involving the election-technology companies a "cyber Pearl Harbour," writing that she "reveals groundbreaking new evidence indicating our Presidential election came under massive cyber-attack orchestrated with the help of Dominion, Smartmatic, and foreign adversaries."

In response, Fox aired a segment attempting to correct misinformation about Smartmatic on the shows that were mentioned in the letter. On December 20, a law firm representing Dominion Voting System, another voting technology company that had been criticised on Fox, sent legal preservation letters to Bartiromo, Dobbs and host Sean Hannity. The network has not aired any segment responding to the legal threat from Dominion.

While Giuliani remains a member of the President's legal team, his name has almost disappeared from Fox's airwaves. At the peak of his influence, as a key member of the Trump 2020 efforts to overturn the election, Giuliani was mentioned 324 times on Fox News or Fox Business Network during the week of November 17. Approximately a month later, during the week of December 15, Giuliani's name was mentioned only 13 times.

On the morning of January 6, when the pro-Trump audience was still listening to speeches discounting the veracity of the election, Fox News chief White House correspondent John Roberts informed viewers that he had spoken to Giuliani about 45 minutes earlier, relaying that Giuliani was confident that Vice-President Mike Pence could decline to certify the election. But, the network did not air Giuliani's comments to Roberts.

Smartmatic and Dominion also demanded retractions from Fox's lesser-known competitors in conservative media, including Newsmax, One America News and the Epoch Times. In response to Smartmatic's demands, Newsmax issued a sweeping clarification on the air on December 21. "No evidence has been offered that Dominion or Smartmatic used software or reprogrammed software that manipulated votes in the 2020 election," a Newsmax host said. In contrast, One America has issued no such retraction or clarification.

Powell has also been absent from Newsmax's programming, and does not appear to be slated for future appearances on the network.

Giuliani appeared on One America last week to talk about his participation in the pro-Trump rally that turned into a mob. "They seemed pretty orderly and pretty quiet," Giuliani said of the Trump supporters. "You're going to see that 99 per cent of this was all peaceful," One America host John Ball replied. He also spoke earlier with One America chief White House correspondent Chanel Rion about election issues and about legal challenges in Pennsylvania and Michigan. "They stole an election from us," he said.

One America president Charles Herring said in an email this week: "If there is something newsworthy to discuss, we are pleased to have Mr Giuliani and Ms Powell on OAN."

After last week's riot at the US Capitol, Cumulus Media Group, one of the biggest players on conservative talk radio, issued a memorandum ordering programmers to put an end to on-air rhetoric casting the election results in doubt. It's unknown whether legal liability concerns were a factor in the decision. Two of their most prominent and outspoken hosts, Mark Levin and Dan Bongino, both said this week that they did not receive the memo.