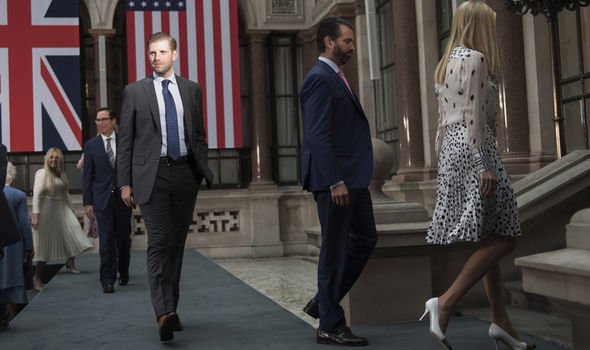 Political ethics campaigners have highlighted that the President’s two sons, Eric and Donald Trump Jr., both run the Trump family businesses- some of which operate in the UK.

Trump owns a number of luxury golf courses in Scotland, including Trump International in Aberdeen and Trump Turnberry in Ayrshire.

Watchdog group Citizens for Responsibility and Ethics in Washington (CREW) said the pair clearly have a “vested interest” in the UK, bringing into question whether they should have been allowed to attend the state event.

CREW spokesman Jordan Libowitz told Newsweek: “Trump is president, his sons Eric and Don Jr. are running the Trump Organization, which the president still profits from.

“The Scottish property does business with the U.K. government and is impacted by the government’s decisions.

“The Trump brothers have a vested interest in making money for their father in the U.K.”

This is not the first time the watchdog group has raised concerns over the ethical business dealings of the Trump team in the UK.

Previously, CREW raised concerns in one of their reports over an interview President Trump gave last year with The Sun.

During the interview, Trump mentioned the upgrade of one of his golf resorts in Scotland, where he said: “I was cutting a ribbon for the opening of Turnberry – you know they totally did a whole renovation, it is beautiful.” 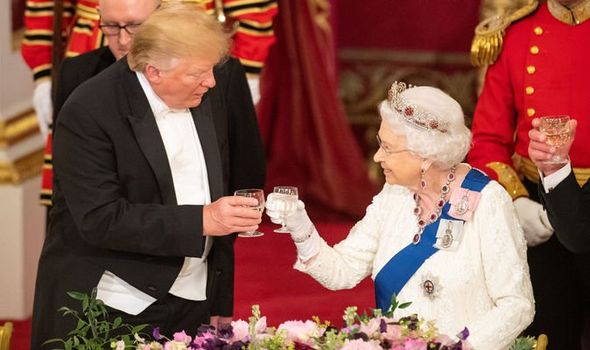 Richard Painter, who was a chief ethics lawyer under President George W. Bush, has also spotted an issue with Trump’s children attending the banquet.

He told Newsweek: “Of course the British can invite anybody they wish and there’s certainly not a prohibition on their dinner.

“My concern is that Donald Trump Jr. and Eric are the two sons running the business, so their day job is to try and enrich the Trump Organization.

“The appearances are awful.”