‘Believe what we say, or else’: Tucker Carlson blasts Democrats’ meaning of racial ‘equity’ saying that Martin Luther King would be ‘disgusted’ by new orders which treat Republicans like ‘jihadis’

Tucker Carlson has slammed Joe Biden for signing a series of executive orders to promote racial ‘equity’ that he believes would ‘disgust’ Martin Luther King Jr and lead to Republican voters being treated as ‘jihadis’.

Biden signed four orders on Tuesday designed to tackle inequality in housing and the prison system, condemn xenophobia and reaffirm the government’s commitment to tribal sovereignty.

But in an impassioned speech on Fox News, Carlson said the policies will harm people the government deem to be ‘privileged’ and force the country to ‘conform to the orthodoxies of the Democratic party’. 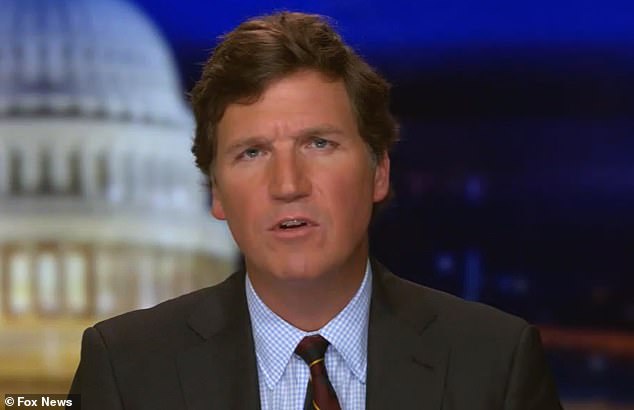 He said policies of ‘equity and inclusion’ allow Democrats to force their ‘indefensible’ views on the country that would even ‘disgust’ Martin Luther King Jr.

Announcing his orders Tuesday, Biden said: ‘I’ll be reaffirming the federal government’s commitment to diversity, equity and inclusion and accessibility, building on the work we started in the Obama-Biden administration.’

Susan Rice, the director of the United States Domestic Policy Council, added at the briefing: ‘Today the average black family has just one-tenth the wealth as the average white family.

‘These aren’t feel good policies, the evidence is clear, investing in equity is good for economic growth and it creates jobs for all Americans.’ 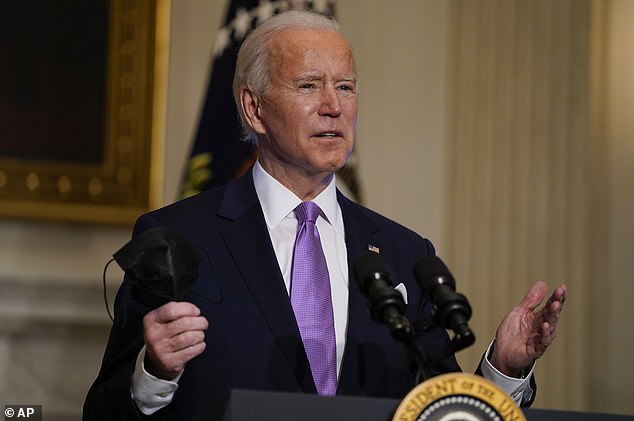 Biden signed four orders on Tuesday designed to tackle inequality in housing and the prison system, condemn xenophobia and reaffirm the government’s commitment to tribal sovereignty

The order ‘charges all executive departments and agencies with engaging in regular, meaningful, and robust consultation with Tribal officials in the development of Federal policies that have Tribal implications.’

Condemning and Combating Racism, Xenophobia, and Intolerance Against Asian Americans and Pacific Islanders in the United States

The order condemns acts of racism toward the Asian-American and Pacific-Islander community and orders the Health and Human Services secretary and other public health professionals to mitigate ‘racially discriminatory language in describing the COVID-19 pandemic.’

It effectively rebukes Trump for calling COVID ‘the China virus’ and

‘The Federal Government must recognize that it has played a role in furthering these xenophobic sentiments through the actions of political leaders, including references to the COVID-19 pandemic by the geographic location of its origin. Such statements have stoked unfounded fears and perpetuated stigma about Asian Americans and Pacific Islanders and have contributed to increasing rates of bullying, harassment, and hate crimes against AAPI persons,’ the order says.

‘The Attorney General shall not renew Department of Justice contracts with privately operated criminal detention facilities, as consistent with applicable law.’ Private prisons are accused of being more likely to mistreat prisoners, particularly from minority groups.

‘This memorandum recognizes the central role the federal government has played implementing housing policies across the United States, from redlining to mortgage discrimination to destructive federal highway construction, that have had racially discriminatory impacts.  This Presidential Memorandum directs HUD to examine the effects of the previous Administration’s regulatory actions that undermined fair housing policies and laws. And, it directs HUD to take steps necessary based on that analysis to fully implement the Fair Housing Act’s requirements.’

But Carlson said: ‘The Rev. Martin Luther King Jr. would be shocked and disgusted if he watched Susan Rice on television.

‘She announced that every agency in the US government, the largest and most lavishly funded organization in human history, must “place equity at the core” of its policy design specifically and for the benefit of “marginalized communities”.

‘According to Rice, much of that money will now be distributed on the basis of equity. That means it will go to people who do not possess “privilege”.

‘Some Americans won’t get jobs because it’s been decided they have too much privilege. Others won’t get into college or get promoted or win federal contracts. Others will see their neighborhoods change dramatically in ways they may not like because of their privilege.’

But, Carlson said: ‘They can’t tell us who, in a country with no majority culture, actually qualifies as a “minority”. They only want to have this conversation at all because their views are indefensible.’

The Fox host continued his invective by talking about press censorship and the ‘muzzling’ of conservative views which has seen right-wing social media site Parler being taken off app stores.

He then quoted Adam Schiff, the lead prosecutor in Donald Trump’s impeachment trial, who said he intends to go after white nationalists and domestic terrorists with the same resources as the country did to international terrorism after 9/11, shifting the priority of Homeland Security.

The Democrat representative said if the Capitol rioters were of a different religion, they would be seen as ‘violent jihadists’.

Carlson said of Schiff’s remarks: ‘Equity and inclusion means that you will believe what they tell you to believe, or else you’re a terrorist and they can hurt you because we hurt terrorists.

Biden signed four orders on Tuesday including one that instructs the Department of Justice not to renew contracts with private prisons. He also signed a memorandum directing the Department of Housing and Urban Development to mitigate racial bias in housing.

He signed an order reaffirming the federal government’s commitment to tribal sovereignty.

And he signed a memorandum condemning xenophobia against Asian Americans, which has been on the rise since the beginning of the COVID-19 pandemic – taking aim at former President Donald Trump’s use of the term ‘China virus.’