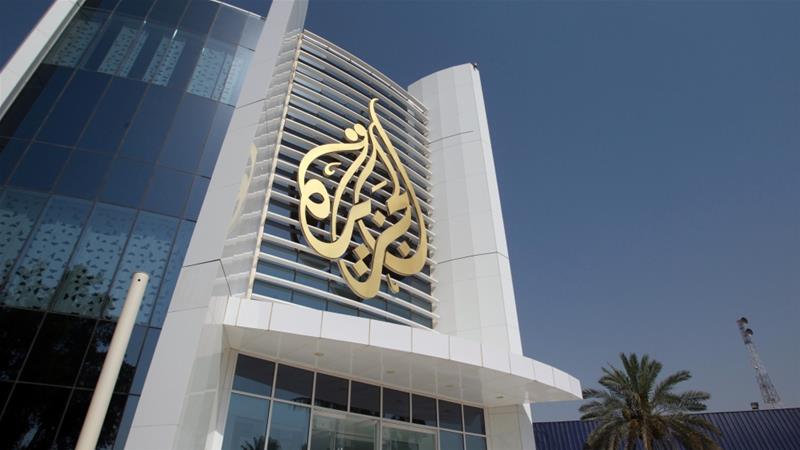 Twitter has deleted a series of tweets posted by Saudi journalist Khaled al-Matrafi, in which he called for the bombing of the Al Jazeera headquarters in Qatar’s capital.

Following a complaint by the Doha-based media network, Twitter’s management on Friday removed al-Matrafi’s posts which violated the social network’s rules and policies.

According to its policies, Twitter does not tolerate violent posts that threaten the lives of innocent people, and any account promoting incitement will be immediately and permanently suspended. Al-Matrafi’s account has not been suspended.

In a series of tweets published on Thursday, al-Matrafi wrote: “The Arab coalition has the right, in accordance with international law, not only to target the rocket launchers that targeted Abha airport, but also to strike those who gave the order, financial backing, and media support to them.”

Al-Matrafi was referring to an attack by Yemen’s Houthi rebels on Saudi Arabia’s Abha airport on Wednesday, which wounded 26 people. The Houthis have been engaged in a war with a Saudi-UAE-led coalition since March 2015.

“This means that the Al Jazeera channel in Qatar could be a legitimate target for the coalition for supporting such a terrorist act,” al-Matrafi wrote, who is known for his controversial Twitter posts, wrote. 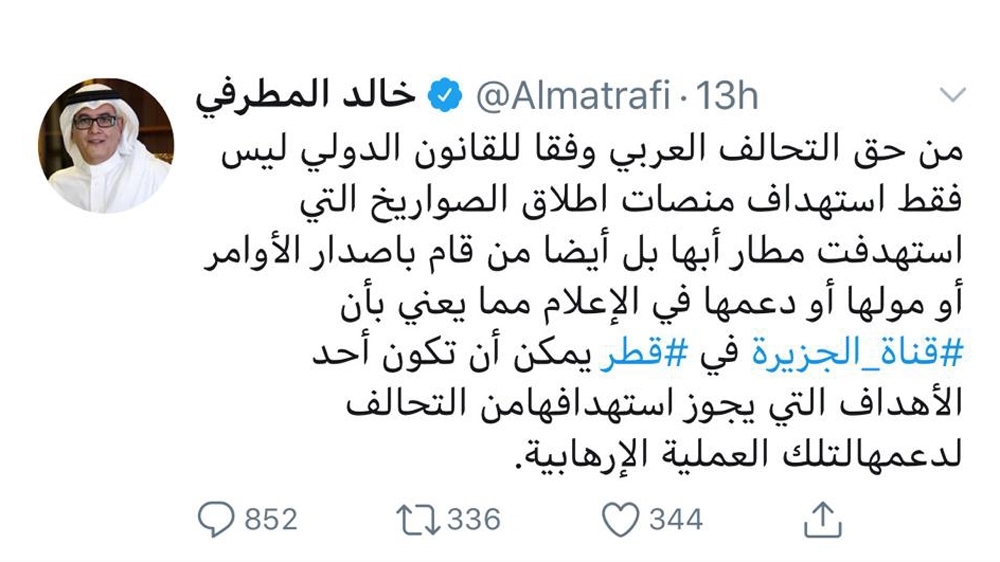 In another tweet, al-Matrafi reiterated his call for the targeting of Al Jazeera.

“International law has given the coalition the ability to respond to the targeting of Abha airport on several fronts, and this does not only concern the Houthi group,” he wrote.

“There is a wide range of objectives that the international conventions and laws of war have allowed the coalition to strike. Al Jazeera in Qatar is a legitimate and logical target.”

Al-Matrafi joined the Saudi-owned al-Arabiya channel in 2009, and served as the director of the channel’s office in Saudi Arabia until 2015.

He currently writes for local newspapers and is known as the “Royal Diwan journalist” for his proximity to influential officials in Saudi Arabia.

There have been previous calls to target Al Jazeera, including an article published on the Saudi-owned newspaper Asharq al-Awsat by Saudi journalist Abdulrahman al-Rashed.

In his article, al-Rashed, a former general manager Al Arabiya TV, warned that by extension, Qatar could face the same treatment similar to what the Egyptian protesters in Rabaa Square in 2013 suffered.

Back then, Egyptian security forces killed hundreds of protesters who had gathered to oppose the military coup against then-President Mohamed Morsi.

By the same token, a senior security official in the United Arab Emirates had called for the bombing of Al Jazeera in November 2017.

Dhahi Khalfan, the deputy chief of Dubai police, tweeted that the Arab coalition should bomb what he called Al Jazeera as a “propaganda machine for terrorism … the channel for the Islamic State, al-Qaeda, and al-Nusra Front.”

Furthermore, leaked documents from Wikileaks also revealed that the Crown Prince of Abu Dhabi, Sheikh Mohammed Bin Zayed, had asked the Americans to bomb the Al Jazeera Channel during the US war on Afghanistan.

Saudi Arabia and the UAE are part of the Arab quartet that has blockaded Qatar since June 2017. Along with Egypt and Bahrain, the blockading countries have accused Doha of harbouring strong ties with Iran, interfering in regional affairs, and supporting terrorism.

Qatar has strongly denied these allegations.

Since the network’s launch almost 23 years ago, Al Jazeera’s offices have occasionally been bombed or shut down in many places, including Kabul, Baghdad and Gaza.