EXCLUSIVE: Voters BACK Covid passports for pubs: Almost two-thirds want compulsory jab proof requirement to enter bars and restaurants in England after Scotland and Wales moves – even though most don’t believe venues will enforce them

Almost two-thirds of voters would support the introduction of rules demanding Covid passports to enter pubs and restaurants in England, a poll reveals today.

More than six in 10 (62 per cent) of those quizzed for MailOnline backed the country following the lead of Scotland and Wales in bringing in laws demanding proof of a jab.

Both countries have brought in laws requiring a vaccine certificate in order to enter nightclubs and other mass-attendance venues.

But similar moves in England, which were once being considered, have been kicked into the long grass by Boris Johnson’s Government.

However, despite majority support in the poll by Redfield and Wilton Strategies, not many people believe that pubs and restaurants would follow the rules.

Little more than a third (35 per cent) thought they would be enforced by venues, with 37 per cent saying it was unlikely. 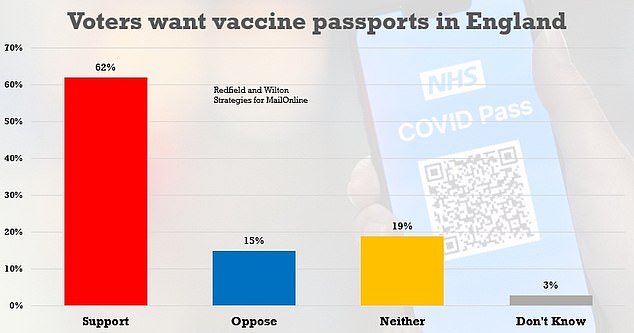 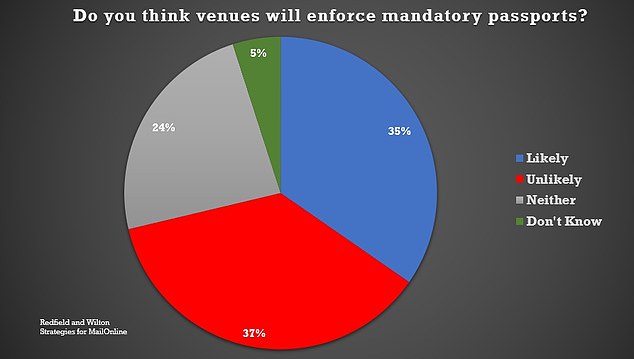 Since Monday, people in Wales have been required to show an NHS Covid Pass or demonstrate their vaccination status to enter nightclubs and attend large events.

The move means all over-18s need one to enter nightclubs and indoor non-seated events for more than 500 people, such as concerts or conventions.

They also need the pass to attend outdoor non-seated events for more than 4,000 people and any setting or event with more than 10,000 people in attendance.

People are also be able to show they have had a negative lateral flow test result within the last 48 hours.

But those who fake a coronavirus test result or vaccination status will be committing a criminal offence and face a fixed penalty notice of £60. This will be reduced to £30 if paid within 14 days – but the fine will double if it is not a first offence.

The legislation was passed in the Senedd last week despite opposition from the Welsh Conservatives, Plaid Cymru and the Liberal Democrats.

Meanwhile a second poll found most working-age Britons have already cut back on spending to make ends meet amid fears over soaring prices.

Research for MailOnline showed growing alarm among the public at cost of living pressures pushing up bills for energy and other essentials.

Some 60 per cent of those aged 18-64 say they have trimmed expenditure over the past month in response to the situation, and 57 per cent said they plan to do so over the next three months.

Meanwhile, amid growing anxiety that interest rates will need to rise soon to control inflation, 13 per cent of mortgage holders said they were ‘very concerned’ about being able to make monthly payments.

And another 35 per cent said they were ‘moderately’ worried about meeting the costs, in the poll by Redfield & Wilton Strategies.

Manufacturers and retailers have been sounding the alert over looming price rises due to a perfect storm of surging demand as world recovers from the pandemic and supply chain problems.