According to the Met Office, the mercury reached 20.4C (68.7F) at St James’s Park in central London and Writtle in Essex yesterday, which was the highest temperature recorded in the UK this year. Many parts of southern England are also basking in a scorching 23C spring heat blast today. But the warm weather may be short-lived as northerly winds are forecast to bring a bitter cold spell and snow over the coming weekend.

The freezing air could also cause temperatures to plummet to -10C in Scotland by Tuesday morning, according to WXCHARTS.

England is also likely to be gripped by subzero lows over the Bank Holiday as the Lake District and Cumbria in the north-west see -5C on Easter Monday, while Leeds and Manchester see -3C.

Further south, Essex and Norwich could be hit with -2C, with London also potentially seeing -1C.

The latest snow probability maps from WXCHARTS show Scotland and northern areas coved by shades of red, orange and purple on Monday, April 5, suggesting there is 50 to 100 percent chance of snow hitting these regions. 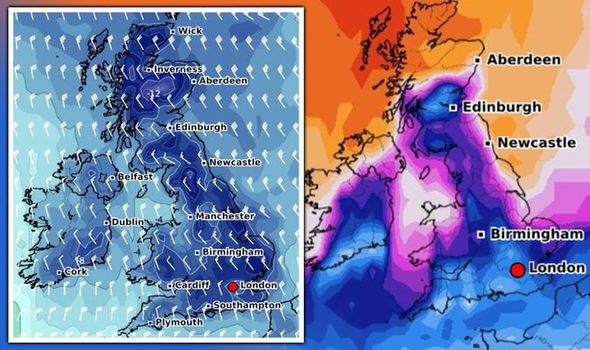 The purple shades also cover the rest of the UK on the same day, which could mean southern parts of England could also see 45 to 60 percent chance of snow.

He wrote on Twitter: “Today’s 12z update shows the risk of snow showers on Easter Monday. 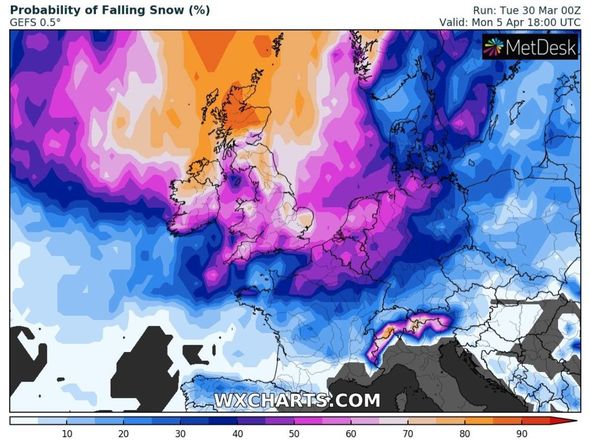 Mr Gaze explained further that “all places” in the UK are predicted to be hit with cold air by Easter Monday.

He said: “Tomorrow patchy outbreaks of rain spread southwards across the northern half of the UK.

“Southern and central have another very mild or even warm day. 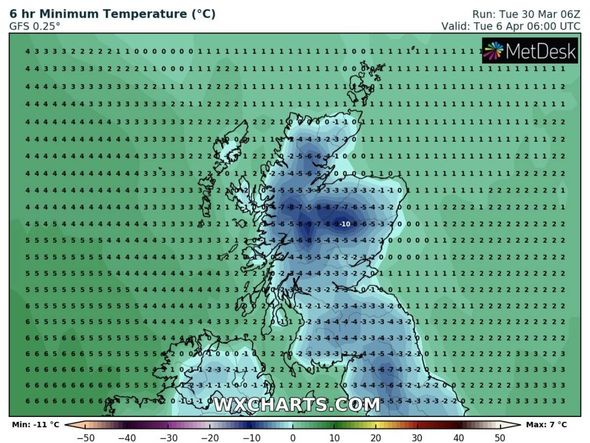 “Thursday sees an area of cloud spreading southwards but it should be dry. To the north cooler and brighter condition develop. In the south it stays very mild or even quite warm.

“Good Friday is looking settled. Central and eastern areas will be chilly. In the west temperatures won’t be far from the seasonal average. A patchy frost is likely to develop overnight.

“The Easter weekend probably starts off mainly dry and mild.

“During Easter Sunday a band of rain pushes southwards and much colder air follows it into the north of the UK. 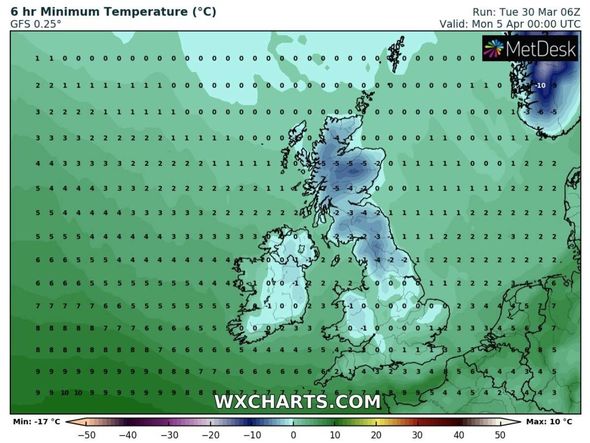 “By Bank Holiday Monday all places are expected to be cold and there is a risk of wintry showers.”

The BBC’s long-range forecast between Saturday, March 27 and Sunday, April 4, added the Easter weekend will be “colder than normal”.

The forecast said: “The warmer air will be short-lived though, as a cold front is set to arrive around midweek.

“There is still some uncertainty on the exact timing, but the front should sweep southwards across the UK either Wednesday or Thursday afternoon. 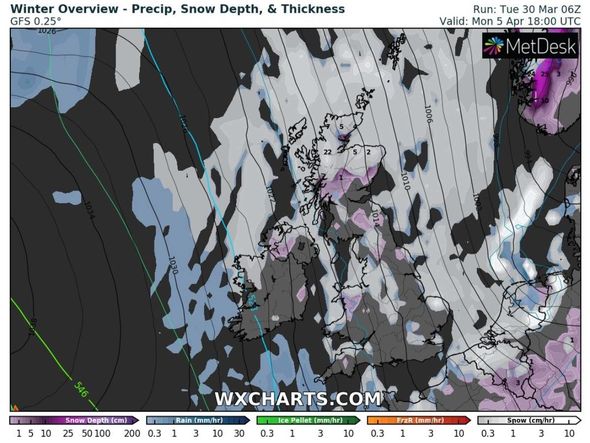 “Heading into the Easter holiday weekend, the weather will likely be a few degrees colder than normal but largely dry with patchy cloud.

“There is a chance of some scattered showers for northern and eastern areas, and these could bring some lowland snow if they develop.

“The cold air arriving in time for the Easter weekend is thanks to a large, strong area of high pressure that is beginning to build in the North Atlantic.

“Unusually warm sea surface temperatures in the Atlantic Ocean, which will favour high pressure development, have helped with the longer forecast detection, and they are also helping increase our confidence. 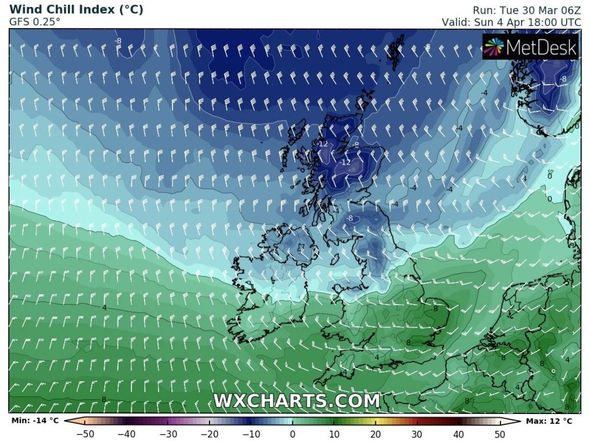 “This means the colder flows will also tend to linger for the first week of April.”

The Met Office also predicted wintry conditions in Scotland and the north of England this week before temperatures start to climb higher by the middle of the month.

The forecast between Saturday, April 3 and Monday, April 12, added: “Widely fine conditions are expected across the British Isles on Saturday with plenty of dry weather and sunny spells for most.

“Temperatures will be around or a little below average for the early part of April, with some chilly nights. 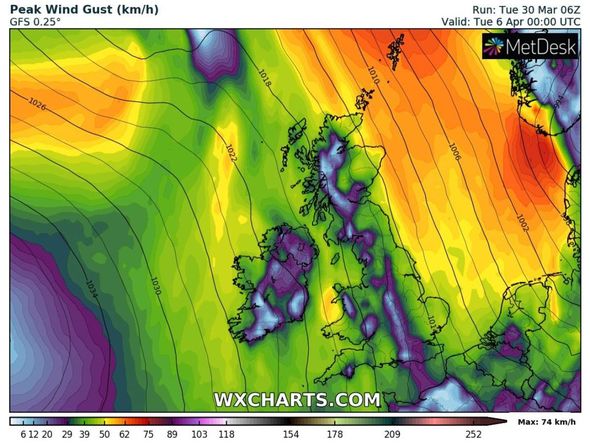 “It will then likely turn colder and more unsettled for northern regions by the start of the following week.

“All areas of the UK are likely to see spells of rain at first and accompanying stronger winds, wintry showers are then expected to follow – these heaviest in Scotland and northern England.

“Following this cold and unsettled spell, conditions are likely to become more settled with temperatures starting to return back to average towards the end of this period.”