Northerly polar winds are predicted to hit at the start of March, bringing one last blast of cold air before spring arrives later in the month. The latest snow probability maps from WXCHARTS show swirls of purple, dark blue sweeping over northern parts of the UK from the Arctic region on Wednesday, March 10. The swirls then turn different shades of light blue and white as they hit southern regions on the same day, suggesting there is between 10 to 50 percent chance of snow falling across the whole of Britain.

Temperatures are also expected to plummet as low as -4C in central Scotland on the same day.

Further down in northern England, lows of -2C could hit Cumbria and Liverpool in the north-west.

Parts of Yorkshire, including Leeds and Doncaster, may also be hit with a chilly -1C during the first week of March.

London and Kent in the south east are expected to see lows of -1C on Monday, March 8. 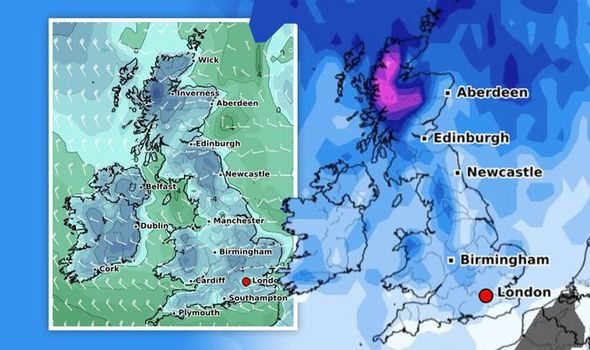 The BBC’s long-range forecast between Monday, March 1 and Sunday, March 1, warned of a “sharp cold” developing.

The forecast said: “we feel that risks of below-normal temperatures might start to become apparent by the end of the first week of the month.

“The main risk to the forecast is that high pressure fails to begin to shift westwards, remaining overhead or even drifting eastwards into Germany.

“This will keep things feeling near or a bit above average for temperatures as colder flows stay east of us.

“There is a very small chance for some sharp cold to develop later in the week.

“But there is less and less support for this as we get closer to March.”

The BBC added the following week will be hit with more unsettled conditions as low pressure sweeps more cold air into the UK.

The forecast between Monday March 8 and Sunday March 21 said: “Heading through mid-March and beyond, high pressure is expected to recede farther into the Atlantic.

“Its influence on the UK’s weather will recede. 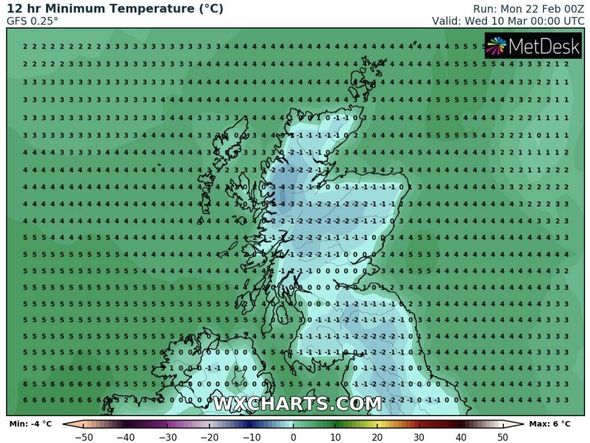 “This would allow a trough of low pressure to develop over western and north-western Europe, leading to more unsettled and changeable conditions.

“Precipitation will likely be quite variable as Atlantic frontal systems potentially move through.

“Similarly, temperatures will likely be quite variable as well, but there will be plenty of mild spells as fronts arrive followed by colder snaps between fronts.

“The later we head in March, the more dominant low pressure systems will become for the UK. 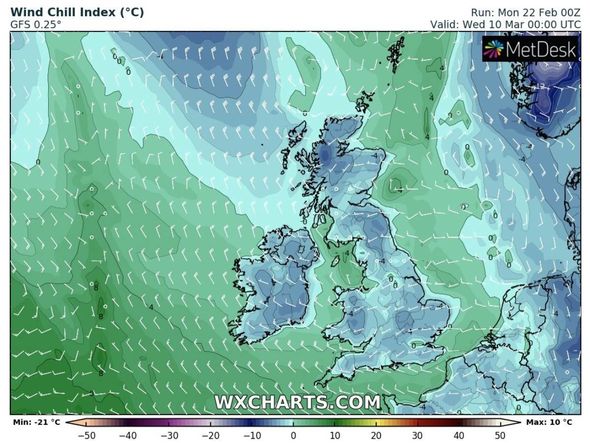 “This means we should have a gradual increase in unsettled weather and day-to-day variability in precipitation and temperatures.”

The Met Office added there could be a chance of cold temperatures overnight during the first week of March.

The long-range forecast said: “Any unsettled weather with corresponding showers or rain is most likely to occur in the north and northwest of the UK.

“Strong winds may also affect northern and northwestern areas at times, but elsewhere winds will likely be light and, as a result, fog formation overnight may become more prevalent. 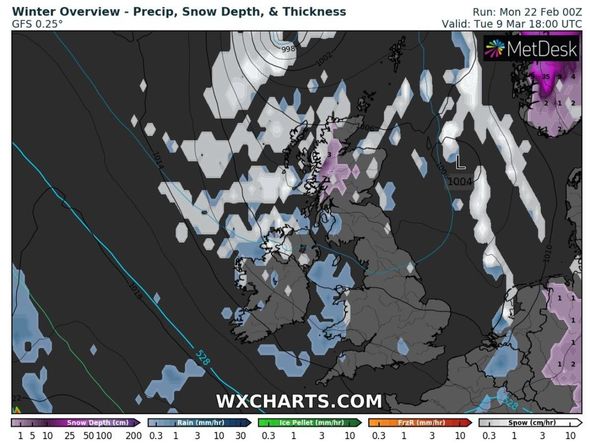 “Temperatures for this period will likely be average or slightly above average for the time of year, although some cold nights with frosts are still possible.”

The long-range forecast at Netweather also hinted at wintry conditions returning to the UK.

The forecast between Monday, March 8 and Sunday, March 14, said: “Perhaps wintry at first but probably becoming mainly dry although with night frosts that could be quite sharp.

“Sunny spells may give some pleasant even spring-like afternoons but although somewhat uncertain at this distance, there are hints of a raw North East wind developing by mid-March.”

CHELSEA are reportedly set to offer contract extensions to both Antonio Rudiger and Andreas Christensen. The centre-backs have become key

CHELSEA are reportedly set to offer contract extensions to both Antonio Rudiger and Andreas Christensen. The centre-backs have become key