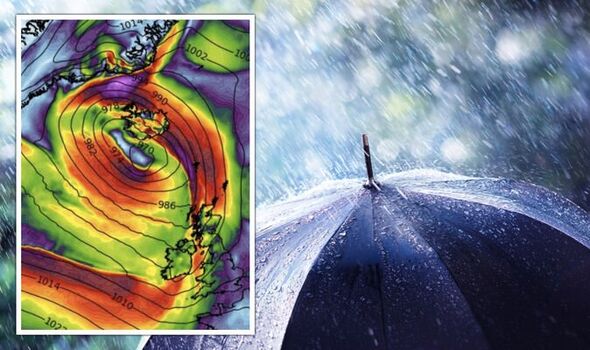 Although neither the Met Office nor Met Eireann have named a deep low-pressure system due to hit on Friday, if it grew to threshold strength it would earn the first title of the season–Antoni. The Met Office last night warned the Atlantic cyclone is on course whip up a bout of rain and high winds after a chilly ‘autumnal’ week.

The 1,500-mile-wide low, stretching from Greenland to Britain, will flick a tail of torrential downpours and gales from Friday into the weekend.

It comes as Britain wraps up for an early winter cold snap driven by the remains of Hurricane Fiona.

Daniel Rudman, the Met Office’s deputy chief meteorologist, said: “A deeper area of low pressure will move into the northwest of the UK.

“This means that many can expect a more notably wet and windy spell, for a time on Friday, than we’ve seen so far this autumn.

“Knock-on effects from the Atlantic tropical cycle season can lower confidence when forecasting more than a few days ahead, and so the exact timings for rainfall and wind strengths for Friday may vary throughout the week.” 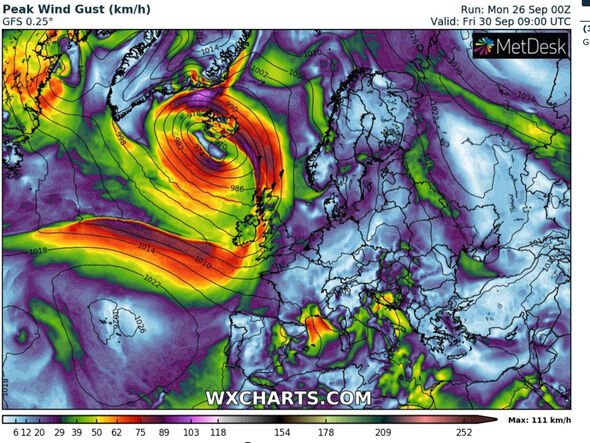 Britons are urged to keep up to date with the forecasts, especially for outdoor plans, he added.

He said: “The best thing you can do if you’ve got outdoor plans is make sure you’re always using the most up to date forecast.”

Met Office spokesman Stephen Dixon said it is ‘too early to tell’ whether the storm will trigger government warnings or a name.

A plume of cold air thrusting into Britain from the Arctic will bring the risk of frosts and snow through the week. 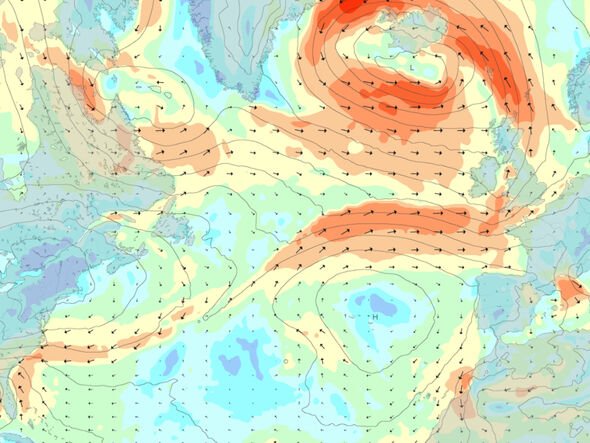 The remains of Hurricane Fiona will strengthen a region of high pressure in the Atlantic, dragging cold air down from the north.

Cold weather will hold out through the rest of the week before the unsettled spell ushers a period of milder weather.

A separate low-pressure system ‘hanging around’ through the next few days will drive the cold weather before Friday’s storm hits.

Jim Dale, meteorologist for British Weather Services, said: “Hurricane Fiona is now gone, but the remnants will amplify high pressure in the Atlantic, and this will help the cold flow of air into the UK.

“Low pressure will hang around for a few days through the week to the east of the UK, which means the north-east will be windier and colder.

“Then another area of low pressure arrives at the end of the week.”

The Met Office earlier this month updated its tropical storm forecast from May which warned of increased activity.

The new report warns tropical storm frequency will be around average with a slightly above average incidence of hurricanes and major hurricanes.

Weather models show Friday’s storm heading to the UK early on before sweeping the country ahead of the weekend.

Strong gales will hit parts of the country as it passes before the weather calms potentially making way for a warm spell.

Mr Dale said: “After next weekend temperatures could pick up and a spell of warmer weather will follow.

“So, after an unsettled and cold week, there are signs of better weather on the way.”