The Met Office said the temperature soared to 27.6C at 2.27pm at Heathrow in west London on Saturday. That beat 2019’s previous warmest temperature of 25.8C, which was set last month. June 1 is treated by weather experts as the meteorological first day of the UK summer.

Areas in the south east of England have enjoyed the best of the weekend weather so far, with Teddington in south-west London and Wisley in Surrey seeing the mercury rise to 26.4C.

The temperature also reached 26C in High Beach, Essex, and 25.9C at the Iver water works in Buckinghamshire.

Conditions could get even hotter in East Anglia on Sunday, with temperatures of 28C or 29C expected, but that could also bring a risk of thunder.

Met Office meteorologist Emma Smith said the hot weather is the result of the jet stream moving north and high pressure and heat coming from the continent in the south. 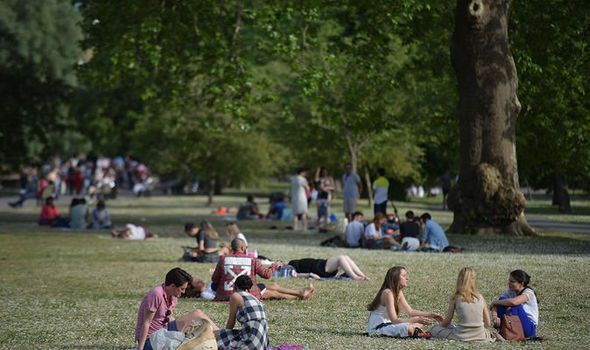 It’s hot for the time of year

She said on Saturday: “For this time of the year it should be 19 or 20C in London and in East Anglia it should be 18 or 19C, where we could see the hottest temperatures tomorrow.

“The last time we had 28C was August last year. It’s hot for the time of year.”

According to the Met Office, Saturday evening will remain dry in central and south-eastern areas.

Elsewhere conditions will turn cloudier and breezier, with outbreaks of rain across Northern Ireland, spreading to Scotland, north-west England and west Wales by the morning.

On Sunday, rain showers are expected to spread eastwards with a risk of isolated thundery showers in the east and south east, accompanying the hot weather.

Monday is forecast to be windy with showers in the west and north-west, while dryer and brighter elsewhere.