A former comedian who played a fictional schoolteacher-turned-president in a popular TV series, the 41-year-old Zelenskiy has tapped into widespread voter anger over corruption and low living standards in one of Europe’s poorest countries.

Sunday’s likely victory would give him control of parliament and the formation of a new government, handing him a stronger mandate to implement reforms after he won the presidential election in April by a landslide.

Exit polls showed him far ahead of all other parties although possibly short of a majority, prompting him to offer coalition talks with a pro-Western party, Voice, fronted by another political novice, rock star Sviatoslav Vakarchuk.

“We invite Mr. Vakarchuk to talk,” Zelenskiy said at his election headquarters after the exit poll results were released.

“I think that the post of the Ukrainian prime minister – I will repeat – must be occupied by a new face, a person who specializes in economics,” he added.

On taking office, Zelenskiy had to deal with a cabinet and lawmakers mostly loyal to his predecessor Petro Poroshenko, prompting him to announce on the day of his inauguration a snap election to win a mandate in parliament.

Exit polls showed his Servant of the People party with by far the most votes. The Russian-friendly Opposition Platform was in a distant second place, followed by Poroshenko’s party and that of a former prime minister, Yulia Tymoshenko.

Vakarchuk’s Voice party was fifth. After Zelenskiy’s offer, a senior member said Voice was open to an alliance with new political forces so long as they were not backed by oligarchs. 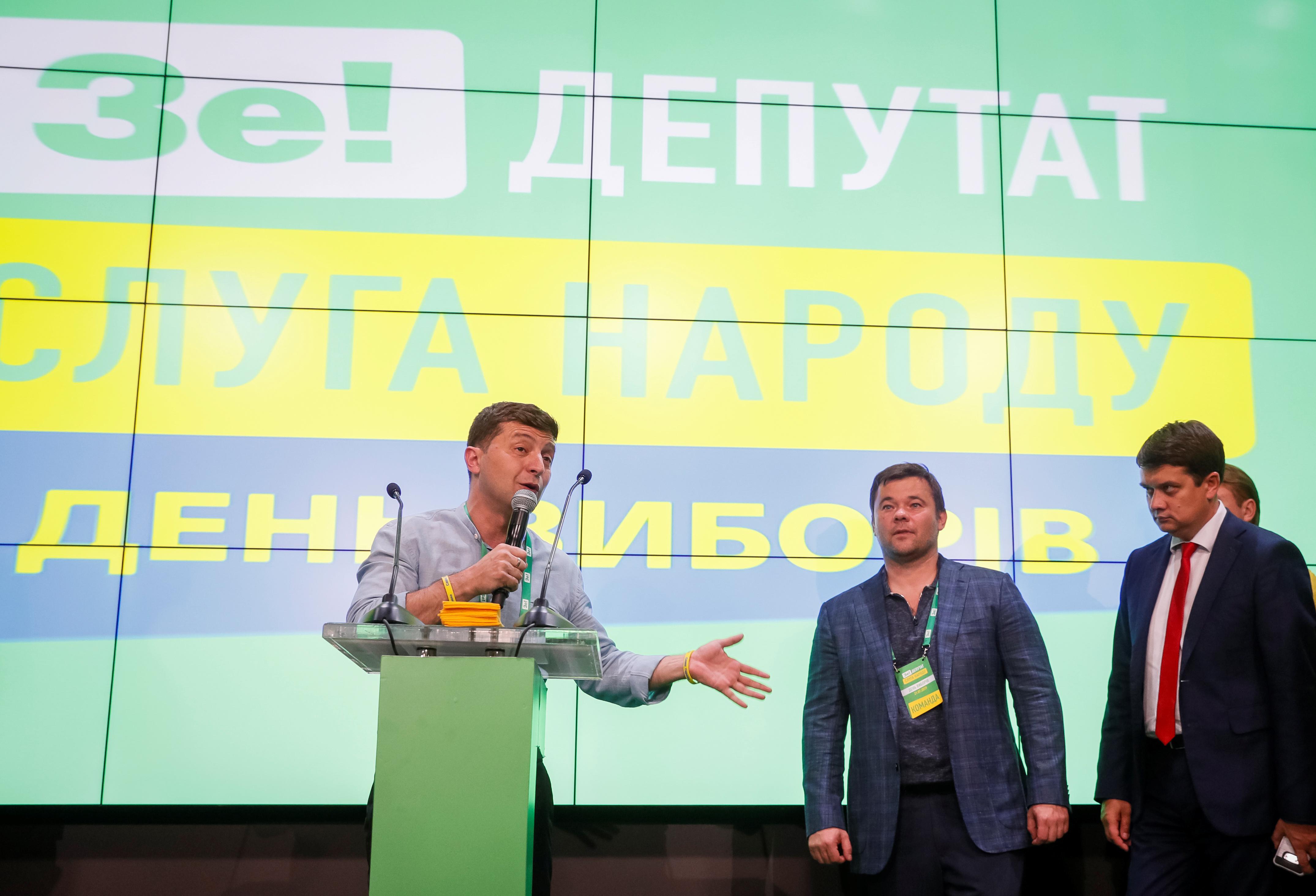 The election gives Zelenskiy a firmer grip on a country at the center of a dispute between Moscow and the West, arising from Russia’s annexation of Ukraine’s Crimea peninsula in 2014 and support for separatists in an armed revolt in the east.

The new government will also need to implement reforms agreed with international donors to secure billions of dollars of new loans to keep the economy stable.

Zelenskiy, after casting his ballot in north Kiev, said he was holding consultations with a possible candidate for prime minister whom he did not identify. “I would like him to be an absolutely independent person, who has never been either a prime minister or a speaker or a leader of any faction.”

One candidate for prime minister could be Vladyslav Rashkovan, a former central bank deputy governor and now Ukrainian representative at the International Monetary Fund, one of Zelenskiy’s parliamentary candidates told reporters.

Beyond his everyman image, Zelenskiy has faced scrutiny over his business connections to one of Ukraine’s most powerful tycoons, Ihor Kolomoisky, owner of the TV station that brought Zelenskiy fame. Zelenskiy insists he is not beholden to Kolomoisky and will not take his side in a dispute with the state over control of Ukraine’s biggest bank.

Zelenskiy will seek a new aid-for-reforms program with the IMF and has promised crowd-pleasing anti-corruption measures, such as stripping lawmakers of immunity from prosecution.

Often tie-less and speaking to voters through social media videos, Zelenskiy has carried his informal style from the campaign trail into the presidency.

In one of his first acts after taking office, Zelenskiy announced he was moving out of the presidential administration building as a symbolic break with the old way of doing politics, just as his fictional president did in the TV series. His rise has come at the expense of many of the parties that came to power following the 2014 Maidan street protests that ousted the Kremlin-backed former President Viktor Yanukovich.

One Zelenskiy supporter, 40-year-old Kiev teacher Vitaly Solomakha, told Reuters TV he had cast his ballot for the Servant of the People party “in order to give a man who got 74 percent of (presidential) votes a chance to bring to life everything he promised.”