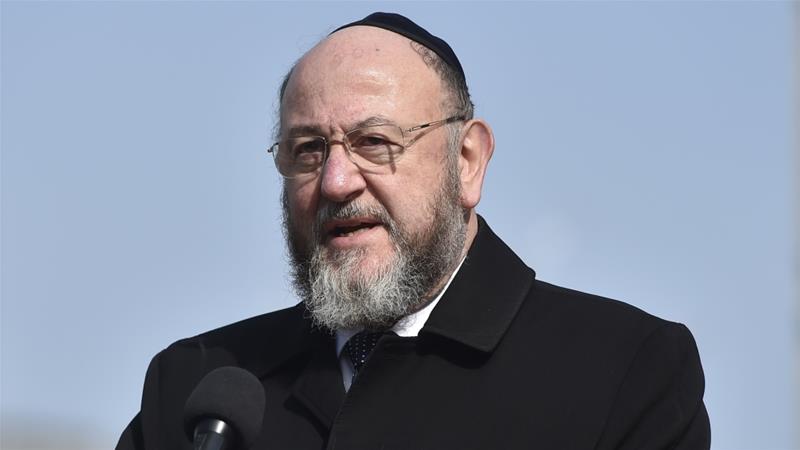 The United Kingdom’s chief rabbi has slammed the main opposition Labour Party over alleged anti-Semitism, saying it is not doing enough to end racism under Jeremy Corbyn’s leadership.

In an opinion article published by The Times newspaper on Tuesday, Ephraim Mirvis said “a new poison – sanctioned from the very top – has taken root” in the party, which is jostling for support in the run-up to a general election next month.

Mirvis said Labour’s claims that the party was doing everything it can and has investigated each case were a “mendacious fiction”.

He wrote: “The Jewish community has watched with incredulity as supporters of the Labour leadership have hounded parliamentarians, members and even staff out of the party for challenging anti-Jewish racism.

“The way in which the leadership has dealt with anti-Jewish racism is incompatible with the British values of which we are so proud – of dignity and respect for all people.”

Corbyn has been dogged by criticism from members, legislators and Jewish leaders, who say he has failed to tackle anti-Semitism in the party despite promising to do so.

The 70-year-old, who was elected to the Labour leadership in 2015, has called anti-Semitism “a poison and an evil in our society” and repeatedly said he is working to root it out of the party.

But Mirvis, who by convention usually steers clear of party politics, said the “very soul” of the UK was “at stake” over the party’s handling of the issue and called on “every person to vote with their conscience” in the December 12 poll.

“It is not my place to tell any person how they should vote. I regret being in this situation at all. I simply pose the question: What will the result of this election say about the moral compass of our country?” he wrote.

‘An evil in our society’

Later on Tuesday, Corbyn is expected to launch Labour’s Race and Faith manifesto, which will set out how the party aims to target inequalities in employment, education and “representation in public life”.

Addressing the issue of anti-Semitism, a spokesman for Labour, which is trailing Prime Minister Boris Johnson’s Conservatives, said Corbyn was a lifelong campaigner against anti-Jewish racism.

“A Labour government will guarantee the security of the Jewish community, defend and support the Jewish way of life, and combat rising anti-Semitism in our country and across Europe,” Reuters News Agency quoted the spokesman as saying. “We are taking robust action to root out anti-Semitism in the party, with swift suspensions, processes for rapid expulsions and an education programme for members.”

Labour peer Alf Dubs earlier told the BBC that Labour should have moved faster to deal with allegations of anti-Semitism against some of its members, but also defended Corbyn’s leadership and said the party had moved on from its “murky past”.

“I think he is fit to be prime minister, I do not believe he’s anti-Semitic, I believe things have happened under his leadership which should have been stopped way back,” the 86-year-old said.

“I certainly listen to what the Jewish community has to say and I’m sure Jeremy Corbyn does as well.”

A number of prominent Labour party figures – including former Mayor of London Ken Livingstone and Member of Parliament Chris Williamson – have been suspended from the party over incidents linked to alleged anti-Semitism.

Britain’s Equality and Human Rights Commission launched a formal investigation into the Labour Party over the issue earlier this year.

Meanwhile, the Muslim Council of Britain has also urged the body to also open an inquiry into alleged Islamophobia in the Conservative Party.

Islamophobia in the @Conservatives is systemic, institutional and rife. We have had nothing but dithering and delays on an inquiry by the party. The EHRC must investigate this as a matter of urgency. https://t.co/pMIoGkbM95

The Conservatives suspended several party members earlier this month after an investigation by The Guardian newspaper exposed 25 individuals who posted Islamophobic and racist material on social media platforms.

The newspaper reported that the 25 party members – either current Conservative councillors at the time or former councillors – had posted, shared or endorsed Islamophobic or other racist content online.

The posts included calls for mosques to be banned and claims followers of the Islamic faith want to “turn the world Muslim”. Other posts also referred to Muslims as “barbarians” and “the enemy within”.