America and China have agreed to meet in Washington next month to discuss ending the trade war just hours after Trump tweeted that US has been subjected to ‘Tariff Terrorism.’

A date has been scheduled for ‘early October’ in the American capital and diplomats from both countries will meet for the first time since the war’s recent escalation.

The news of a cooling of relations comes from a statement released in China today by the country’s Commerce Ministry.

The statement said that China’s Vice Premier and chief trade negotiator Liu He spoke with US Trade Representative Robert Lighthizer and Treasury Secretary Steven Mnuchin on the phone.

Lighthizer’s office confirmed the two countries would meet over the next few weeks and said they sought to ‘lay the groundwork for meaningful progress’ beforehand. 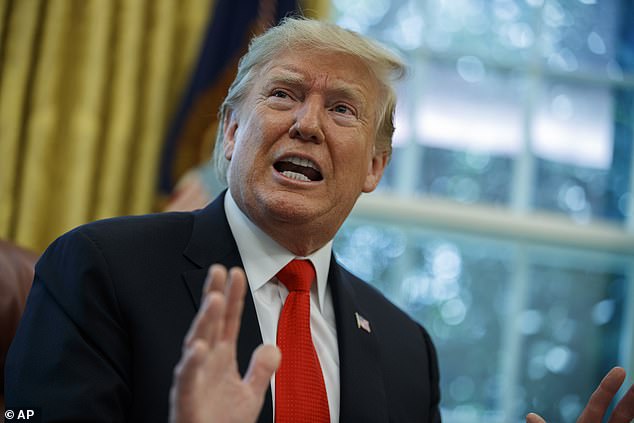 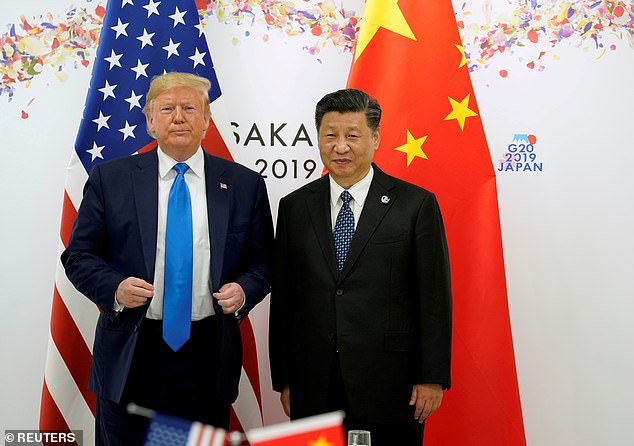 Trump has warned that if he is re-elected, China will face a tougher U.S. negotiating stance. He is pictured here with Chinese President Xi Jinping at the G20 leaders summit in June

Since September 1, Trump allowed tariffs on $250 billion of clothing, footwear and other goods go into effect, in line with an August announcement that he’d be retaliating against China for tariffs it put on $75 billion worth of American-made goods.

Despite the announcement of the trade talks looming, on Wednesday, Trump fired a tweet from his presidential account:  ‘Don’t keep ducking the reality. The US has been subject to Tariff Terrorism for 50 years. But a real deal can be done.’

Trump has not publicly commented on the trade talks with China.

Officials will ‘conduct conscientious consultations’ in mid-September to prepare, the Chinese ministry said. It gave no details but said the two sides want to create ‘favorable conditions’.

Beijing is balking at US pressure to roll back plans for government-led creation of global competitors in robotics and other industries.

The US, Europe, Japan and other trading partners say those plans violate China’s market-opening commitments and are based on stealing or pressuring companies to hand over technology. 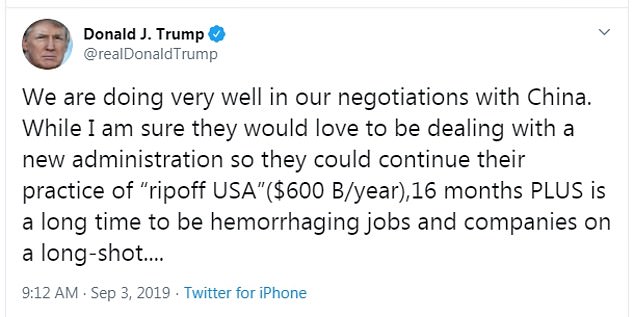 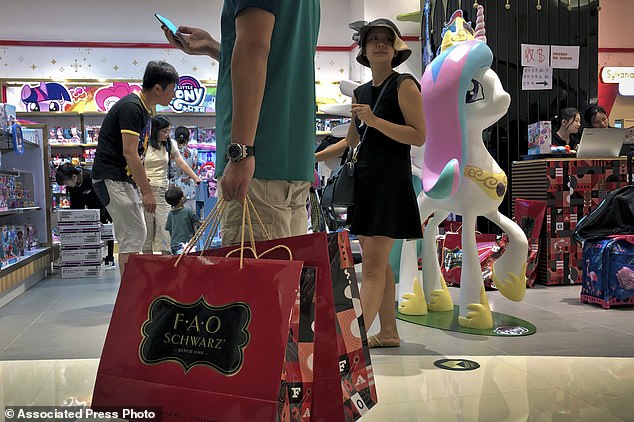 Since September 1, Trump allowed tariffs on $250 billion of clothing, footwear and other goods go into effect, in line with an August announcement that he’d be retaliating against China for tariffs it put on $75 billion worth of American-made goods.

The US and China have raised tariffs on billions of dollars of each other’s imports, disrupting trade in goods from soybeans to medical equipment and battering traders on both sides.

In their latest escalation, Washington imposed 15 per cent tariffs on $300 billion of Chinese imports on Sunday, extending penalties to almost everything the United States buys from China. Beijing responded by imposing duties of 10 per cent and 5 per cent on a range of American imports.

US tariffs of 25 percent imposed previously on $250 billion of Chinese goods are due to rise to 30 per cent on October 1.

China has imposed or announced penalties on a total of about $120 billion of U.S. imports, economists estimate.

Some have been hit with increases more than once, while about $50 billion of US goods is unaffected, possibly to avoid disrupting Chinese industries.

Beijing also has retaliated by canceling purchases of soybeans, the biggest single US export to China.

Beijing has agreed to narrow its politically sensitive trade surplus with the US but is reluctant to give up development strategies it sees as a path to prosperity and global influence.

Talks broke down in May over how to enforce any agreement.

China insists Trump’s punitive tariffs must be lifted once a deal takes effect. Washington says at least some must stay to make sure Beijing carries out any promises.

The last round of talks in July in Shanghai ended with no indication of progress. Neither government has given any indication it is ready to break the deadlock by offering concessions.

Some analysts suggest Beijing is holding out in hopes Trump will feel pressure to make a more favorable deal as his campaign for the 2020 presidential election picks up. Trump has warned that if he is re-elected, China will face a tougher US negotiating stance.

Stock markets rose on Thursday’s announcement but there has been no sign of progress since Trump and Chinese president Xi Jinping agreed in June to resume deadlocked negotiations about trade and technology.