US military’s archbishop says Catholic troops should NOT be forced to get vaccinated if it violates ‘the sanctity of their conscience’ as 3.3% of active duty troops remain unvaccinated

The archbishop assigned to the US military has said that Catholic troops should not be forced to take COVID-19 vaccines if they violate the individual’s conscience, regardless of whether cells from aborted fetal tissue were used in their creation or testing.

Archbishop for the Military Services Timothy P. Broglio issued his opinion in a statement on Tuesday, seeming at odds with Pope Francis’ strong encouragement for all Catholics to get vaccinated.

‘Notwithstanding the moral permissibility of these vaccines, the Church treasures her teaching on the sanctity of conscience,’ Broglio wrote. ‘Accordingly, no one should be forced to receive a COVID-19 vaccine if it would violate the sanctity of his or her conscience.’

The latest DoD administrative data shows that about 20 percent of active duty troops are Catholic, a similar rate to the general US population. 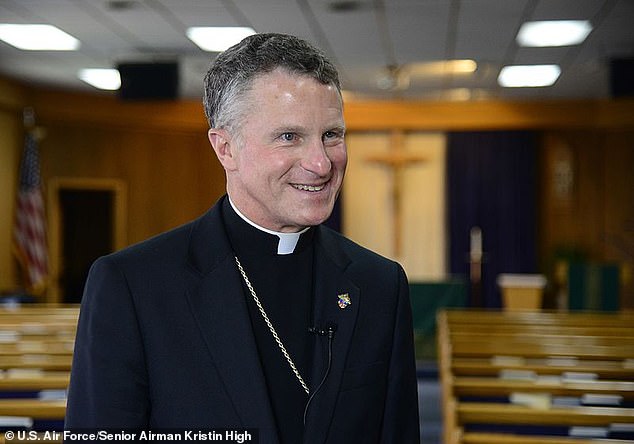 Archbishop for the Military Services Timothy P. Broglio has said that Catholic troops should not be forced to take COVID-19 vaccines if they violate the individual’s conscience 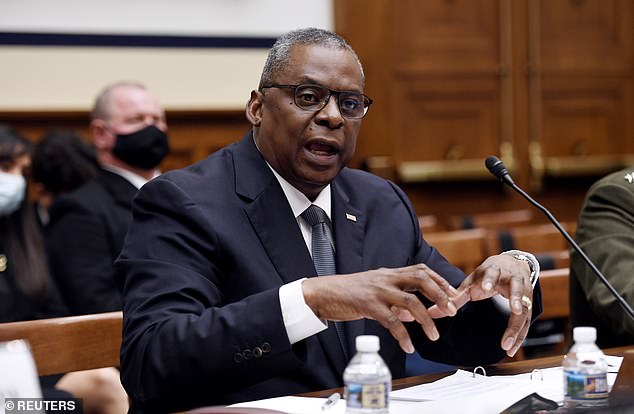 Secretary of Defense Lloyd Austin on August 24 issued an order for all military personnel to be vaccinated, even if they have already recovered from infection

Secretary of Defense Lloyd Austin on August 24 issued an order for all military personnel to be vaccinated, though each service branch has set its own deadlines and will consider certain exemptions on medical, administrative, or religious grounds.

A Pentagon source told DailyMail.com on Wednesday that the Navy and Marine Corps had not issued any religious exemptions as of last week, but was uncertain about the Army or Air Force.

Pentagon spokesman John Kirby said on Tuesday that 96.7 percent of the nation’s 1.4 million active duty personnel have received at least one vaccine dose, and 83.7 percent are fully vaccinated.

That means that roughly 46,000 active duty troops have yet to receive at least one shot.

Some Catholics who view abortion as a grave moral evil have expressed concerns about the use of cell lines from aborted fetal tissue in the development of COVID vaccines.

Cells derived from aborted fetal tissue were used in testing of the Pfizer and Moderna vaccines, and in production of the Johnson & Johnson vaccine.

However, as Archbishop Broglio noted in his statement, the Catholic Church’s highest authorities have confirmed that it is morally permissible to receive the vaccines, with the Congregation for the Doctrine of the Faith ruling that receiving the shots ‘does not constitute formal cooperation with the abortion.’ 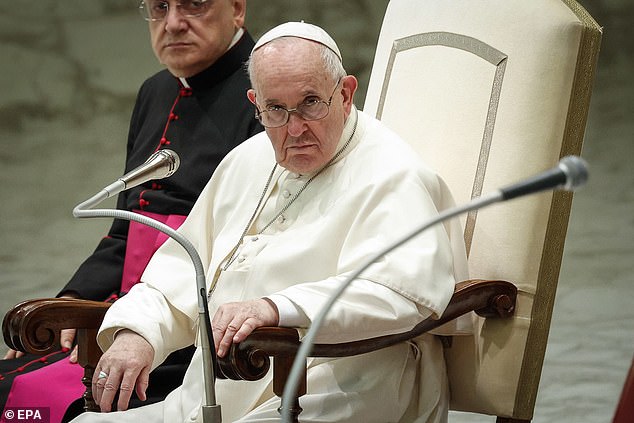 Pope Francis has encouraged his Catholic flock to get vaccinated, calling it ‘an act of love’ 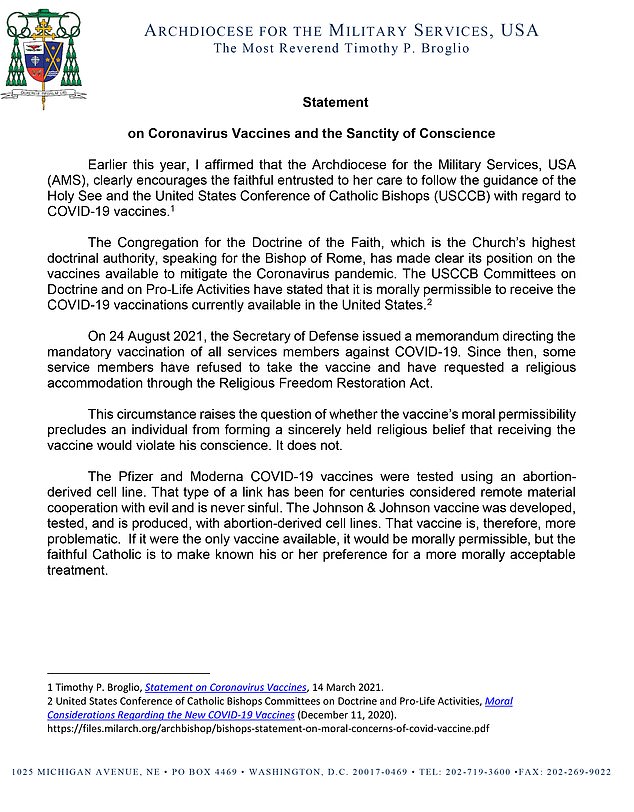 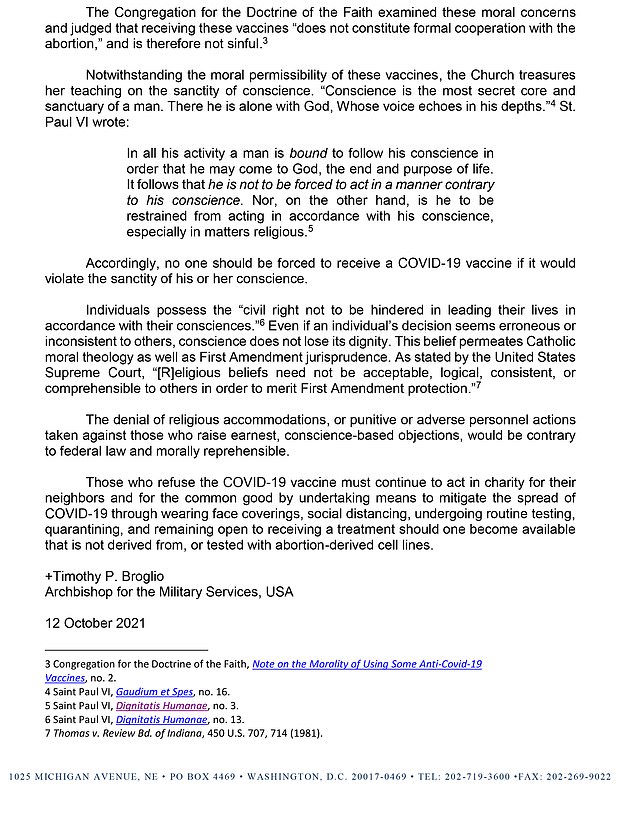 Broglio issued his opinion in a statement on Tuesday, seeming at odds with Pope Francis’ strong encouragement for all Catholics to get vaccinated

Pope Francis himself has actively encouraged his Catholic flock to get vaccinated, calling it ‘an act of love.’ Vatican City now requires staff and visitors to show proof of vaccination, natural immunity, or a recent negative COVID test.

But Broglio argued that an individual’s conscience must take priority, even if the church has deemed vaccines permissible.

‘Even if an individual’s decision seems erroneous or inconsistent to others, conscience does not lose its dignity. This belief permeates Catholic moral theology as well as First Amendment jurisprudence,’ Broglio wrote.

‘The denial of religious accommodations, or punitive or adverse personnel actions taken against those who raise earnest, conscience-based objections, would be contrary to federal law and morally reprehensible,’ he added.

The Air Force has the earliest deadline for active duty service members to get vaccinated, and an estimated 10,000 airmen have yet to receive a shot, according to data published by the branch.

Kirby, the Pentagon spokesman, said on Tuesday that he did not know whether the Air Force was now promoting the single-shot Johnson & Johnson vaccine with the deadline now weeks away. 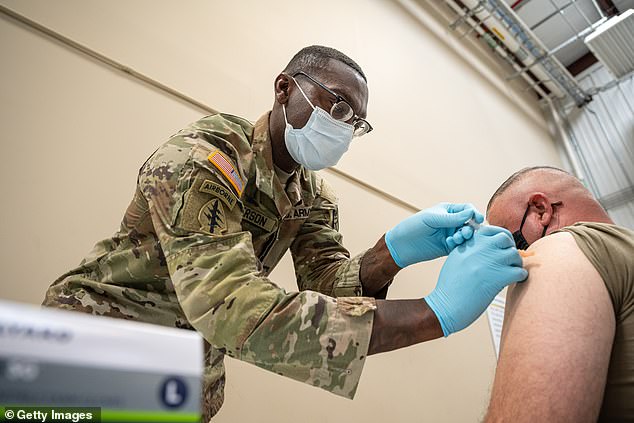 A soldier is seen being vaccinated on September 9 in Fort Knox, Kentucky

‘Commanders will try to get these troops to make the right decision based on information and education,’ Kirby said.

‘And for somebody that refuses, they’ll be given a chance to get more context from medical service providers as well as their chain of command. It’s a lawful order,’ he said.

‘So obviously, if after all that effort the lawful order is disobeyed, there could be disciplinary action,’ Kirby said. ‘But the secretary believes that there’s lots of tools available to leaders, short of using the Uniform Code of Military Justice, to get these troops to do the right thing for themselves and for their units.’

The Air Force and Space Force have set a November 2 deadline for active-duty airmen and guardians to be fully vaccinated, while the Navy’s sailors and Marines have until November 28. 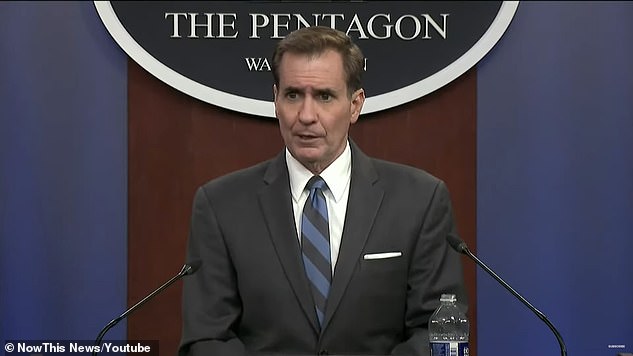 John Kirby, the Pentagon press secretary, said on Tuesday that they were hoping ‘to get these troops to make the right decision’ before the vaccine deadlines began to hit

Overall military vaccination rates, which include reserve troops who do not face vaccine deadlines until next year, are lower than for active duty troops.

The Pentagon says that 1.7 million of total service members have received at least one shot, or roughly 78 percent of the total force strength of 2.2 million.

According to the DoD dashboard, 67 service members have died from COVID-19, and 2,197 have been hospitalized, out of the 2.2 million active duty, reserve and Nation Guard troops.