Terrorist Usman Khan was able to travel to London to unlawfully kill two people at a rehabilitated prisoners event at Fishmongers’ Hall after a string of failures by authorities, an inquest jury concluded today.

Cambridge graduates Jack Merritt, 25, and Saskia Jones, 23, were fatally stabbed by the fanatic at a Learning Together offender education alumni event on November 29 2019.

Khan, 28, who wore a fake bomb vest, was tackled by delegates armed with a narwhal tusk and a fire extinguisher, and driven out on to London Bridge where he was shot dead by police.

An inquest at the Guildhall in London heard that Khan had been released from prison 11 months earlier under strict licence conditions and was under investigation by counter-terrorism police and MI5.

But the ‘manipulative and duplicitous’ terrorist hid his murderous intent from those tasked with keeping the public safe, the hearing was told.

The combination of his lies and communication break-downs between authorities meant he was able to travel free to London to wage his bloodthirsty attack.

He was so trusted the fact he was constantly wearing a huge coat for the entire day – which hid his weapons and fake bomb – was hardly noticed by people at the event. 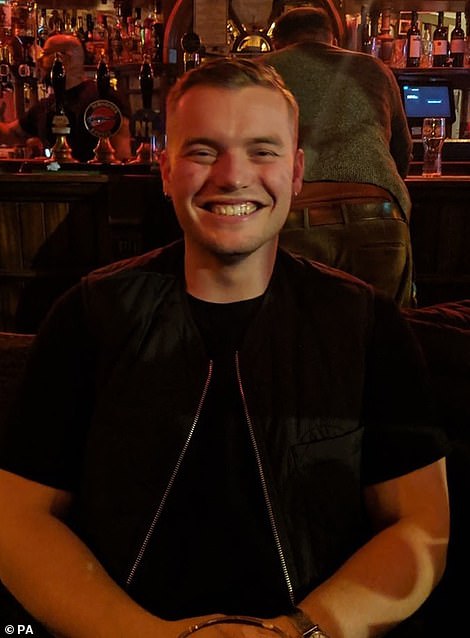 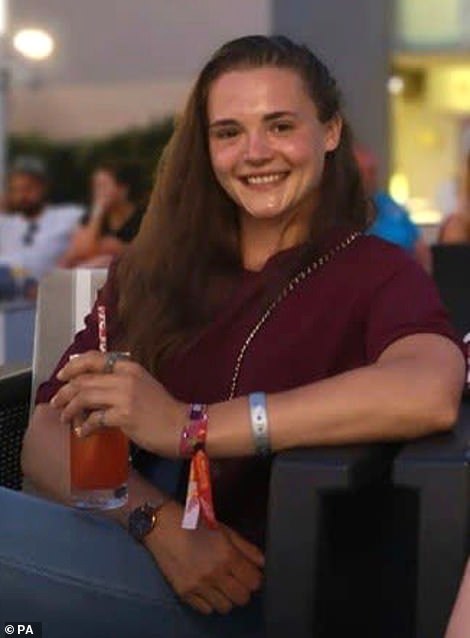 Cambridge graduates Jack Merritt (left), 25, and Saskia Jones (right), 23, were stabbed by the terrorist during a Learning Together rehabilitation project event 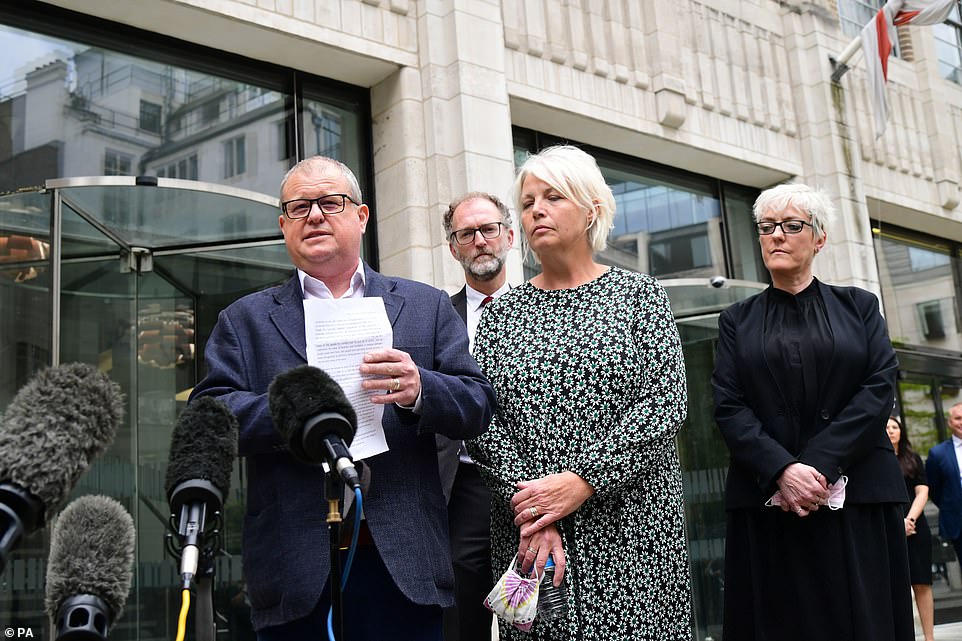 Dave Merritt, the father of Jack Merritt, speaks to the media alongside Jack’s mother Anne Merritt (centre) outside the Guildhall, London, following the jury’s verdict today

Unsurprisingly the jury found the victims had been ‘unlawfully killed’ and confirmed basic facts surrounding their deaths.

But they made sure to criticise agencies involved in the management of the attacker, saying there was ‘unacceptable management, a lack of accountability and deficiencies in management by Mappa (multi-agency public protection arrangements)’. 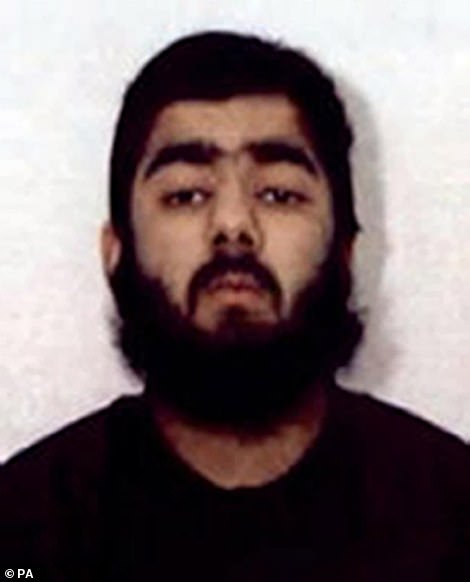 The jury criticised the planning for the Learning Together event at Fishmongers’ Hall, saying there had been a ‘lack of communication and accountability’.

They added there had been ‘inadequate consideration of key guidance between parties, serious deficiencies in management of Khan by Mappa’.

The jury added there had been a ‘failure to complete event-specific risk assessment by any party’.

They found that those involved with Khan had been blinded by his ‘poster-boy image’ for the Learning Together programme.

They added that there had been ‘missed opportunities for those with expertise and experience to give guidance’ in the management of Khan.

The Mappa panel, made up of largely police and probation officers, met 12 times to discuss Khan’s case.

A plan for him to attend a Learning Together event in March 2019 was deemed ‘too soon’ and a dumper truck course was rejected due to incidents of terrorists using vehicles as weapons.

However, in the summer of 2019, Khan was permitted an escorted appearance at a Learning Together event at Whitemoor prison.

When in August the proposed unescorted London event in November was put forward by the Probation Service, there was no record of it having been positively approved by Mappa.

Jonathan Hough QC, for the coroner, suggested there was ‘a collective blind spot’ about the trip and its associated risks.

Panel chairman Nigel Byford said the decision should have been recorded in minutes but insisted no-one raised any objections about it at the time.

Sonia Flynn, executive director of the Probation Service, told jurors that the decision to allow the London trip should not have been left to one probation officer and there should have been a risk assessment. 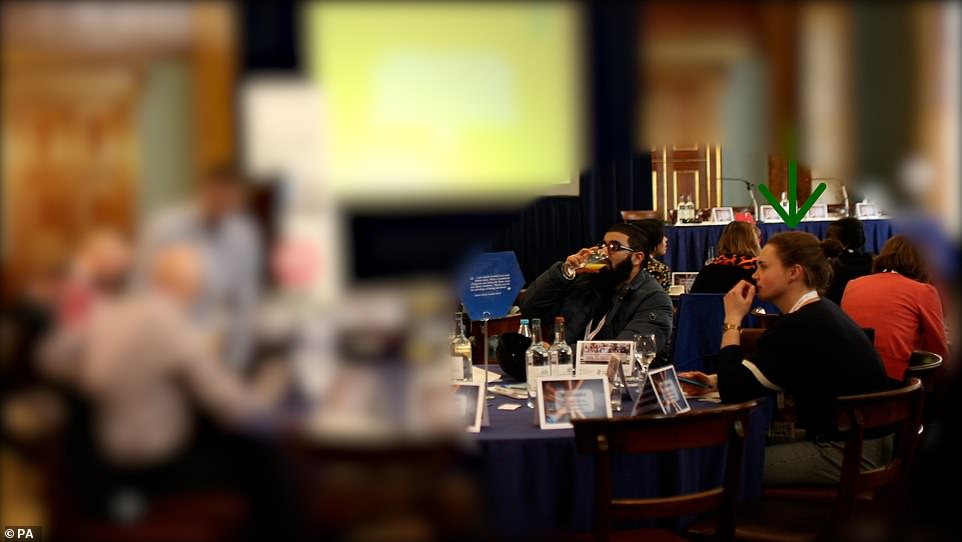 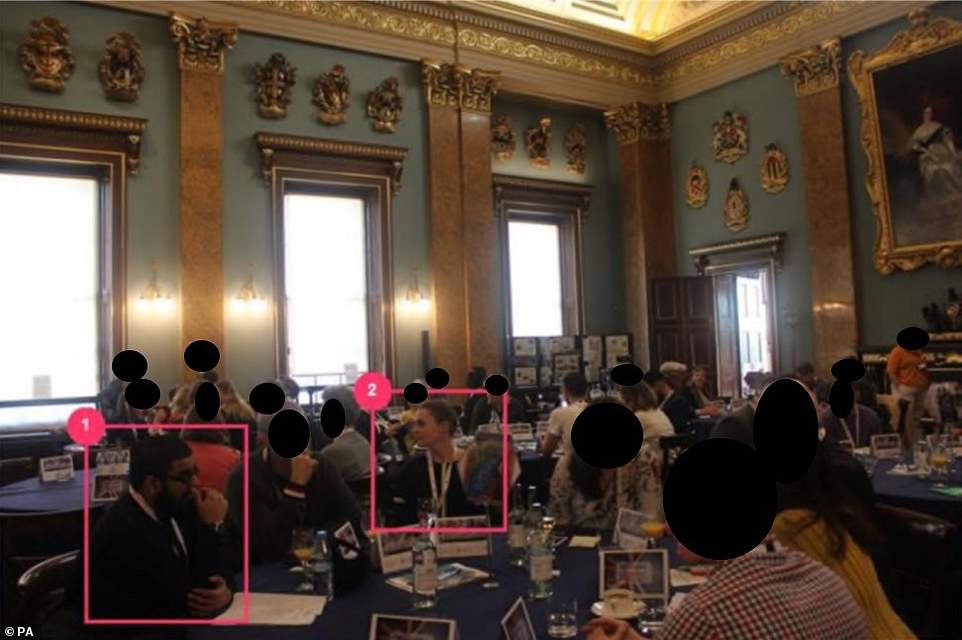 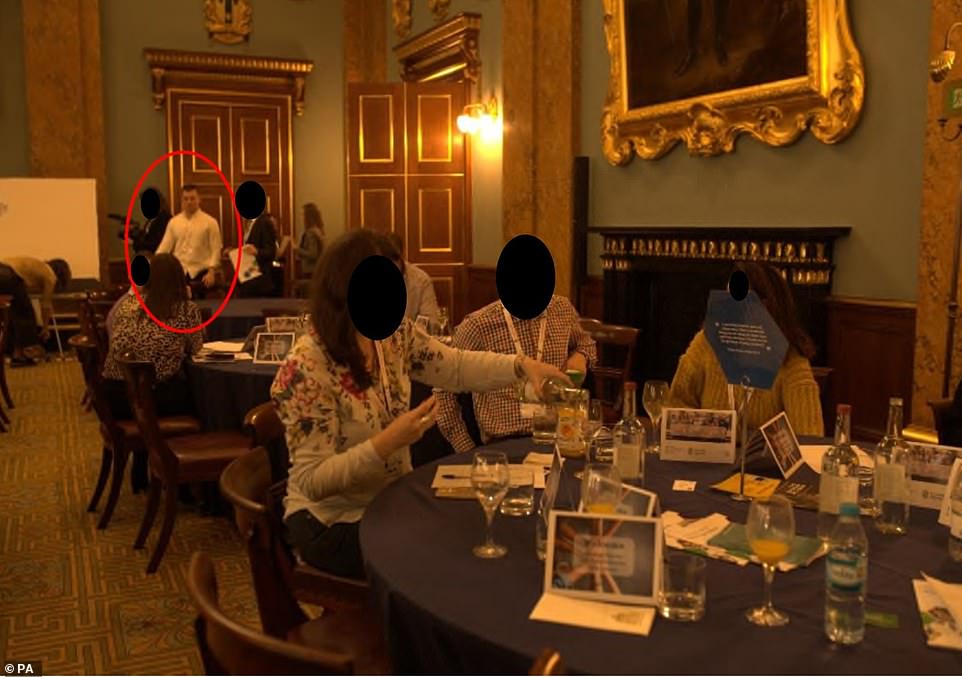 Jack Merritt (circled) in the main event room at the prisoner rehabilitation event near London Bridge on November 29, 2019

How the Fishmongers’ Hall attack unfolded

Convicted terrorist Usman Khan killed two talented young people and injured three more in around five minutes during a knife attack at Fishmongers’ Hall. An inquest into the deaths of Saskia Jones and Jack Merritt has heard a detailed account of how events unfolded:

Probation officers assigned to his case were ‘inexperienced’ in dealing with terrorism offenders, and did not have enough time to spend with Khan, it was claimed.

By September 2019, Khan was exhibiting some of warning signs raised by the prison psychologist in her report the year before.

He had failed to find a job and was increasingly socially isolated, spending much of his time at home playing on his Xbox.

From the time Khan moved out of approved premises and into a rented flat, Prevent police officers visited him twice, spending just 18 minutes with him, the court heard.

The security services learned of the London trip in November 2019, just 11 days before the event.

In her evidence, the senior MI5 officer conceded that a discussion around the risks at the joint operations team meeting ‘would have been helpful’.

But she said it would have taken 24/7 surveillance to have foiled the lone wolf knife attack, which would have been unwarranted on the information they had at the time.

Learning Together co-founder Dr Ruth Armstrong said she was unaware of intelligence on Khan and had she known, he would not have been invited to Fishmongers’ Hall.

Jurors were told the organisation made no risk assessment of the event beforehand.

Evidence during the inquest included how a play written by Khan that foretold parts of his Fishmongers’ Hall atrocity was deemed ‘creative writing’ and did not give security services cause for concern for MI5.

The script, entitled Drive North, was written while he was serving eight years in prison for planning a terror training camp in his parents’ homeland of Pakistan, and was passed on to the spy service in early 2019.

Within the plot, Khan wrote of a protagonist who had been treated in a secure prison unit, before being released and going on to commit a series of murders with a knife.

A senior MI5 officer, known as Witness A for legal reasons, said the foreshadowing play did not necessarily mean Khan ‘may re-engage in terrorist activity.’

The carnage he inflicted during his attack would have been much worse if not for the actions of other reformed prisoners who gave chase to stop him.

They relied on the combined might of an ornamental whale tusk plucked from the wall of Fishmongers’ Hall, a fire extinguisher found at the same location, and their own bare hands to subdue and eventually overcome Khan, who was shot dead by police scrambled to the scene.

Mr Gallant, one of two men convicted of killing Barrie Jackson in Hull in 2005, had been allowed out on licence for the first time when Khan struck on November 29 2019.

Describing his role in containing Khan, Mr Gallant said: ‘I had done a little bit of wrestling so I knew how to pin people to the floor.’

He said Khan managed to get up, so he gave the suspect ‘a couple of uppercuts to the face’ which helped to ‘stun him a little bit’.

A second man, Ministry of Justice communications manager Darryn Frost, wept in the witness box as he described refusing to let go of Khan, even though armed police yelled at him to do so.

‘I didn’t want him to be shot. His statement that he was waiting for the police meant he wanted to die.’

Mr Frost, his voice trembling with emotion, added: ‘I saw the chaos he had caused in the hall – I didn’t want him to have the satisfaction of his choice when he had taken that away from others.’

The third man, former prisoner John Crilly, described how Khan lost his balance after Mr Frost and Mr Gallant struck him during a tense few seconds on the bridge.

It was then that Mr Crilly – who served 13 years in prison for murder before the conviction was quashed and he was resentenced for manslaughter – hit Khan over the head with a fire extinguisher.

He told the inquests: ‘I was telling (police) to shoot the bastard.

‘I was telling them, ‘He’s just killed people, he’s got a bomb, just shoot him’.’ 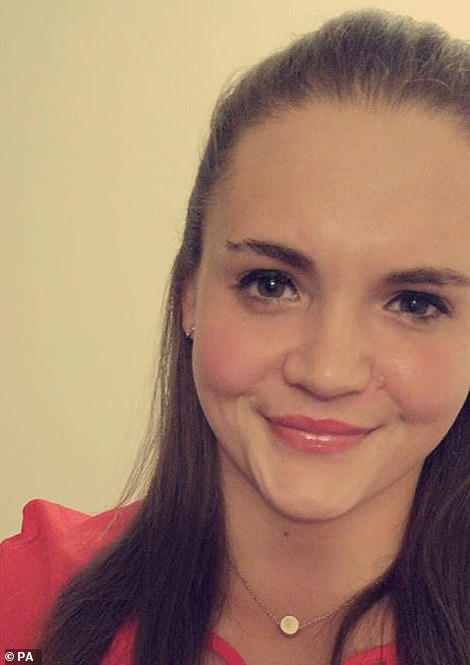 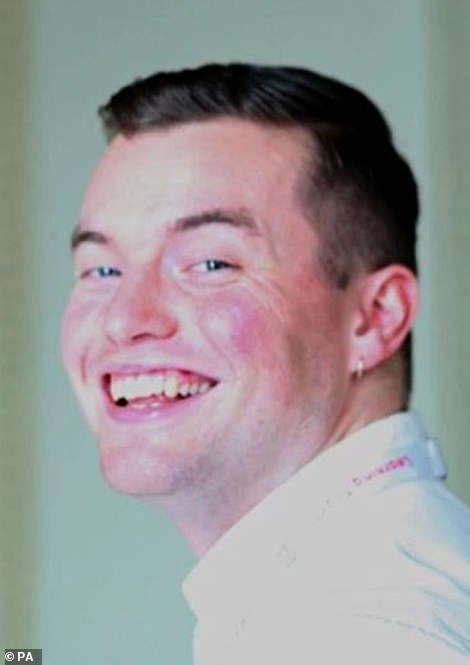 Jack Merritt, 25, and Saskia Jones, 23, were both killed in London by terrorist Usman Khan

Steve Gallant, who met Mr Merritt through prisoner education programme Learning Together, said he initially ‘whacked’ Khan with a narwhal tusk inside Fishmongers’ Hall but was empty-handed by the time he got to the bridge.

It came after several people in Fishmongers’ Hall tried to disarm Khan, including porter Lukasz Koczocik, who used a long ceremonial pike plucked from the walls of the Grade II-listed building.

He said: ‘Once I managed to land a strike on his (Khan’s) belly, he grabbed the pike in one hand, still holding the knives, and I couldn’t shake him off.

‘He caught me in the hand and in the shoulder.

‘I dropped the pike because he cut the tendon in my hands so I couldn’t grip it.’

Mr Koczocik said Mr Crilly and Mr Frost then chased Khan out on to the street, prompting him to warn nearby members of the public that Khan was armed.

Criminology graduate Stephanie Szczotko, who survived being stabbed by ‘expressionless’ Khan in her arm and torso, said she remembered trying to raise her arm to defend herself during the attack.

Isobel Rowbotham, who worked part-time as an office manager for Learning Together, described how she had to ‘play dead’ after being seriously injured by Khan.

A decorative pike, which was used by members of the public as they tackled terrorist Khan during the attack in 2019 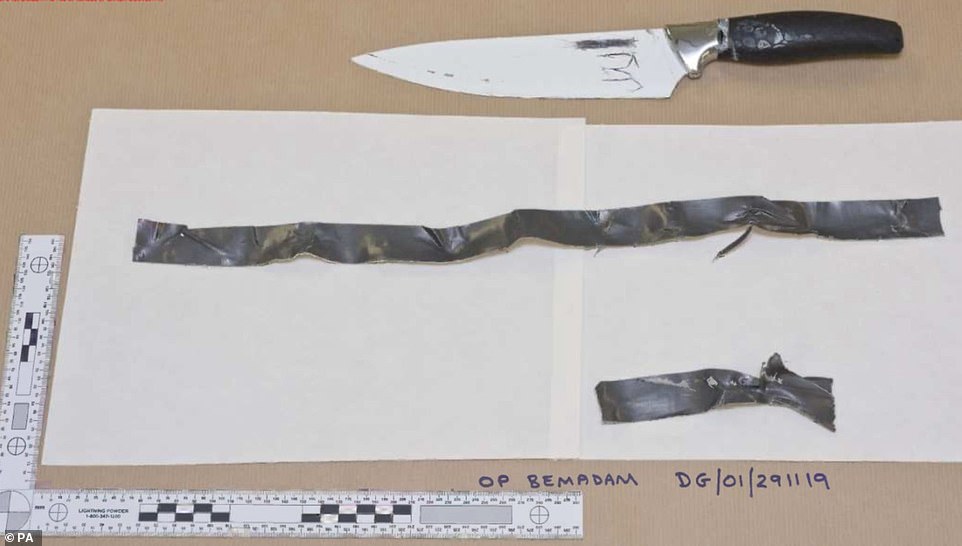 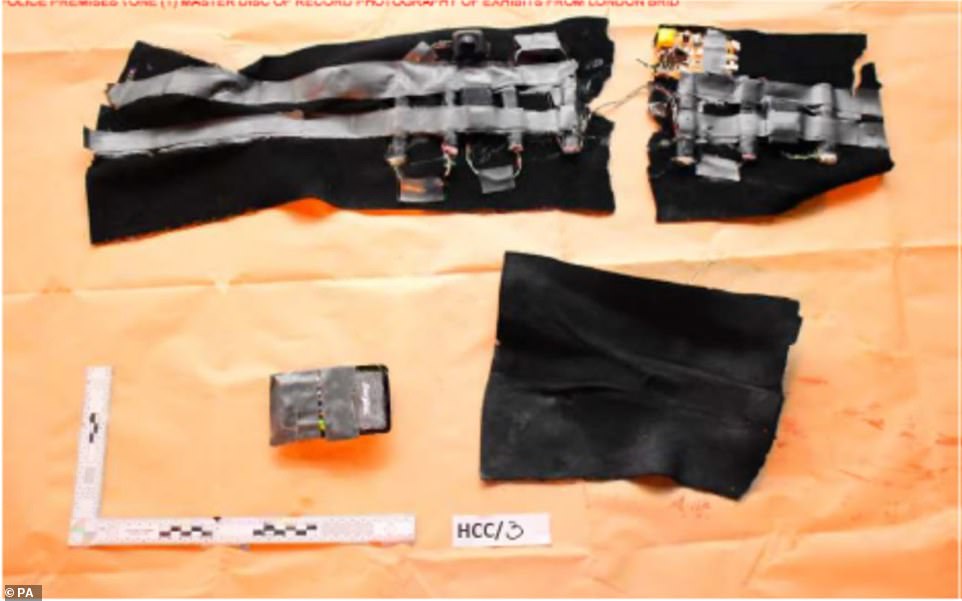 Chief coroner Mark Lucraft QC commended those who challenged Khan after they concluded their evidence.

As the verdict at the inquest was reached the forewoman read a short statement on behalf of the jury addressing the victims’ families.

She said: ‘The jury would like to send their heartfelt condolences to the families of Saskia and Jack, and to all who love and miss these two wonderful young people.

‘They clearly touched the lives of so many, ours included.

‘We wanted to convey to the families how seriously we have taken our collective responsibility. How important this is to us, how much their children matter.’

She continued: ‘We also wanted to take this opportunity to thank the astonishing individuals who put themselves in real danger to help, and our incredible emergency services for their response both that day and every day.

‘Once again to the families, we are so incredibly sorry.