Victoria has reached 20 consecutive days without a new locally acquired COVID-19 case, but one new case has emerged in hotel quarantine.

The latest figures come after six new coronavirus cases confirmed were confirmed in hotel quarantine on Monday, including three in children aged under 10.

Monday’s quarantine cases include two boys and one girl aged under 10, a man and a woman in their 40s and a woman in her 20s. None are connected to the Australian Open.

There are 31 active cases in the state, including one linked to the Black Rock restaurant cluster.

Of the more than 1200 tennis players, coaches and officials in mandatory two-week quarantine ahead of the Australian Open, there are nine positive cases.

Only one tennis player – Spanish world No.67 Paula Badosa – has tested positive, with the remaining positive cases among support staff and a coach. 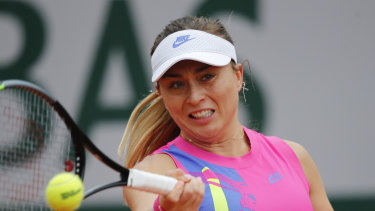 Spain’s Paula Badosa said she was not feeling well after receiving her positive COVID-19 result.Credit:AP

Badosa, who cannot leave her hotel room until January 31, has described her extended period of quarantine ahead of the grand slam following her positive COVID-19 test as the worst moment of her career, adding she felt abandoned by organisers.

“I feel abandoned because I don’t have training equipment which I requested five days ago, I haven’t been told which type of the virus I have, I’ve had no information from the tournament,” she told Spanish newspaper Marca on Monday.

Badosa, who said she had been suffering from anxiety and claustrophobia, has been limited to doing sit ups in her hotel room and using water bottles as weights to try to stay in shape.

The 23-year-old added that the room, which she is sharing with coach Javier Marti, was not suitable for an elite athlete.

“It’s far and away the worst experience of my career,” Badosa said. “The conditions here are lamentable, I wasn’t expecting that. The number one thing people recommend when you have the virus is to open the windows to let in air, but I don’t have windows in my hotel room and it’s barely 15 metres square.”

Three Australian Open participants have been confirmed as having the UK variant of the virus, B.1.1.7.

If Badosa is found to have been infected with the new variant, she will only return to training on February 5 which the Spaniard believes will be too late to regain her fitness.

Following the Therapeutic Goods Administration’s approval of the Pfizer-BioNTech COVID-19 vaccine on Monday, hubs with ultra-cold freezers to store the jab will be set up in some of Melbourne’s major hospitals.

Australian Medical Association Victorian president Julian Rait told The Age it will be a “huge logistical exercise” because the Pfizer vaccine must be stored at minus 70 degrees, although it can be kept at ordinary fridge temperate for five days. From mid-February, it will be given to high-risk groups including aged care residents, healthcare workers and people working in hotel quarantine and border control (and the NRL has said it wants players to be allowed to jump the queue).

Football stadiums and drive-through clinics are being considered because they could vaccinate a large number of people at once while ensuring social distancing requirements are met.

Meanwhile, Australia has suspended its quarantine-free travel scheme with New Zealand for at least 72 hours. The decision came after a new case of the more contagious South African strain of COVID-19 was detected in the community in Auckland.

After arriving back from Europe late last year, the 56-year-old woman completed 14 days in quarantine and returned two negative tests. But in the week after she left isolation, the woman developed symptoms and tested positive.

Investigations are ongoing, but New Zealand’s health authorities believe she became infected while in the quarantine hotel. Any travellers who arrived in Australia from New Zealand on or after January 14 must isolate and get tested.