Atlanta: President Joe Biden has called on Americans to unite to fight discrimination and attacks against Asian Americans, delivering a message of solidarity after killings at three massage parlours in Georgia’s capital city.

“Our silence is complicity,” he said. “We cannot be complicit. We have to speak out.”

Eight people were killed on Tuesday night – six of them women of Asian descent – and a 21-year-old white man, Robert Aaron Long, was arrested. Neither police nor the FBI has described the shootings as a hate crime, and authorities say the investigation is ongoing. Biden avoided the legally freighted phrase but he left no doubt that he believed racial bias played a role. 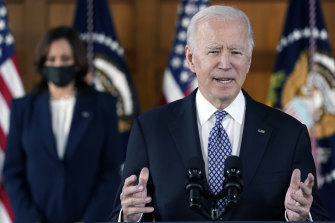 “We must change our hearts,” Biden said. “Hate can have no safe harbor in America. It must stop. It’s on all of us together to make us stop.”

Addressing the nation after a roughly 80-minute meeting with Asian American state legislators and other leaders, Biden said it was “heart-wrenching” to listen to their stories of the fear among Asian Americans and Pacific Islanders amid what he called a “skyrocketing spike” of harassment and violence against them.

The President also called the shootings an example of a “public health crisis of gun violence in this country,” as his administration has come under scrutiny from some in his own party for not moving as swiftly as promised on reforming the nation’s gun laws.

As he headed to Georgia, Biden stumbled as he climbed aboard Air Force One. White House spokeswoman Karine Jean-Pierre told reporters he was “doing 100 percent fine” and suggested high winds at Joint Base Andrews near Washington may have been a factor.

Biden’s trip here was previously planned to promote his COVID-19 relief bill, but it was repurposed to connect with the state’s grieving Asian American communities. Instead of holding a car rally with supporters as previously planned, Biden met privately with local politicians and community leaders before speaking at Emory University.

Vice President Kamala Harris met up with Biden in Atlanta – their first joint appearance on the road since taking office – and spoke briefly before him.

“Everyone has the right to go to work, to go to school, to walk down the street, and be safe,” said Harris, who is the first Black and South Asian person to hold her position. “And also the right to be recognised as an American, not as the ‘other,’ not as ‘them,’ but as us.”

Sam Park, one of five Asian American state lawmakers who met with Biden, said “the fear is palpable” after Tuesday’s shootings. He said that people tell him, “It could be me next”.

Asian Americans were already struggling with a wave of harassment and assaults in the year since the coronavirus began spreading from China, and the shootings ratcheted up concerns across the country.

For the last year, former president Donald Trump described the pandemic as the “China virus,” a term he used again this week during an interview on Fox News, and he repeatedly dismissed criticism that his rhetoric was racist.

Biden and Harris did not mention Trump by name in their public remarks on Friday (Saturday AEDT), but they left no question to whom they were referring.

Biden began denouncing hate crimes against Asian Americans before the shootings, most notably last week during a prime-time speech marking one year since COVID-19 was declared a pandemic.

“At this very moment, so many of them – our fellow Americans – they’re on the front lines of this pandemic, trying to save lives, and still – still – they are forced to live in fear for their lives just walking down streets in America,” Biden said then. “It’s wrong, it’s un-American, and it must stop.”

The outreach has important political ramifications. Democrats hope to solidify their gains in Georgia after Biden’s unexpected victory in the state, and the party’s capture of both Senate seats. Asian Americans are an increasingly influential political force here. Twice as many Asian Americans cast ballots in 2020 compared with 2016.