Washington DC: The White House asked the US Navy to hide a destroyer named after the late senator John McCain in order to avoid having the ship appear in photographs taken while President Donald Trump was visiting Japan this week. 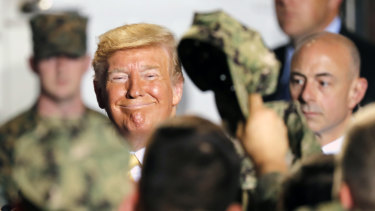 US President Donald Trump greeted US servicemen at the Yokosuka Naval Base on Tuesday.Credit:AP

Although Navy officials insisted they did not hide the ship, the John S McCain, they did give all of the sailors aboard the day off on Tuesday as Trump visited the Yokosuka Naval Base.

Two Navy sailors, who spoke on the condition of anonymity because they were not authorised to speak publicly, said the McCain sailors were not invited to hear Trump speak that day aboard the amphibious assault ship Wasp, while sailors from other US warships at the base were.

One Navy sailor said that McCain sailors wearing their ship's patches were turned away from the President's address.

White House aides, who spoke on the condition of anonymity because they were not permitted to speak publicly, confirmed the request was made but said that Trump did not know about it.

An official on Wednesday, US time, said the White House had sent an email to the Navy with the request on May 15. But the President denied having any involvement. 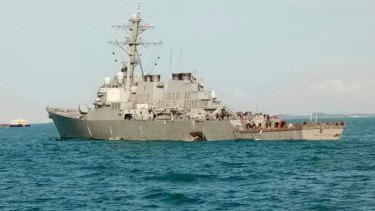 "I was not informed about anything having to do with the Navy Ship USS John S McCain during my recent visit to Japan," he said on Twitter.

McCain, who died last year from brain cancer, was derided repeatedly during his life by Trump, who once disparaged McCain's service because he had been held as a war prisoner in Vietnam, saying, "I like people who weren't captured".

Trump's animosity towards the senator did not subside with his death.

Navy officials declined to comment, but one confirmed that sailors aboard the destroyer were told to hide signs that identified the John S McCain warship during Trump's visit. 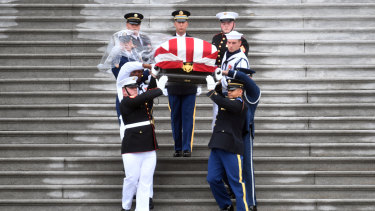 The casket of John McCain is being carried down the steps of the US Capitol last year. Credit:AP

The White House request to hide the name of Trump's rival, first reported by The Wall Street Journal, is the second episode to engulf the Navy in Trump's single visit to the Wasp.

At least a few service members wore round patches emblazoned with a likeness of Trump and the words "Make Aircrew Great Again"— a play on his campaign slogan "Make America Great Again"— on their flight suits while listening to their commander-in-chief speak.

Lieutenant Colonel Joe Buccino, a spokesman for the acting defence secretary Patrick Shanahan, said that Shanahan "was not aware of the directive to move the USS John S McCain, nor was he aware of the concern precipitating the directive". 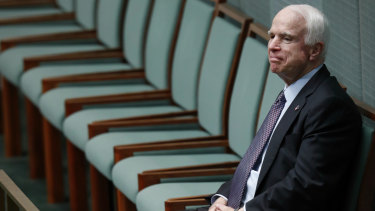 John McCain in the House of Representatives during Question Time in May 2017. Credit:Alex Ellinghausen

The disclosure that the Navy entertained a request to hide a warship named after a war hero from a president who did not serve is likely to resurface questions about whether Trump has politicised the military.

Shanahan, Trump's pick to become defence secretary has taken pains to go along with White House requests, many of which were delayed by his predecessor, Jim Mattis. But this effort could make Shanahan's confirmation fight in Congress more difficult.