A DAD surfing eBay after a downing a few beers found his Holy Grail — a £500 suit of armour.

Dom Ferrar, 44, loved the 4st medieval outfit so much he bid for it and won. 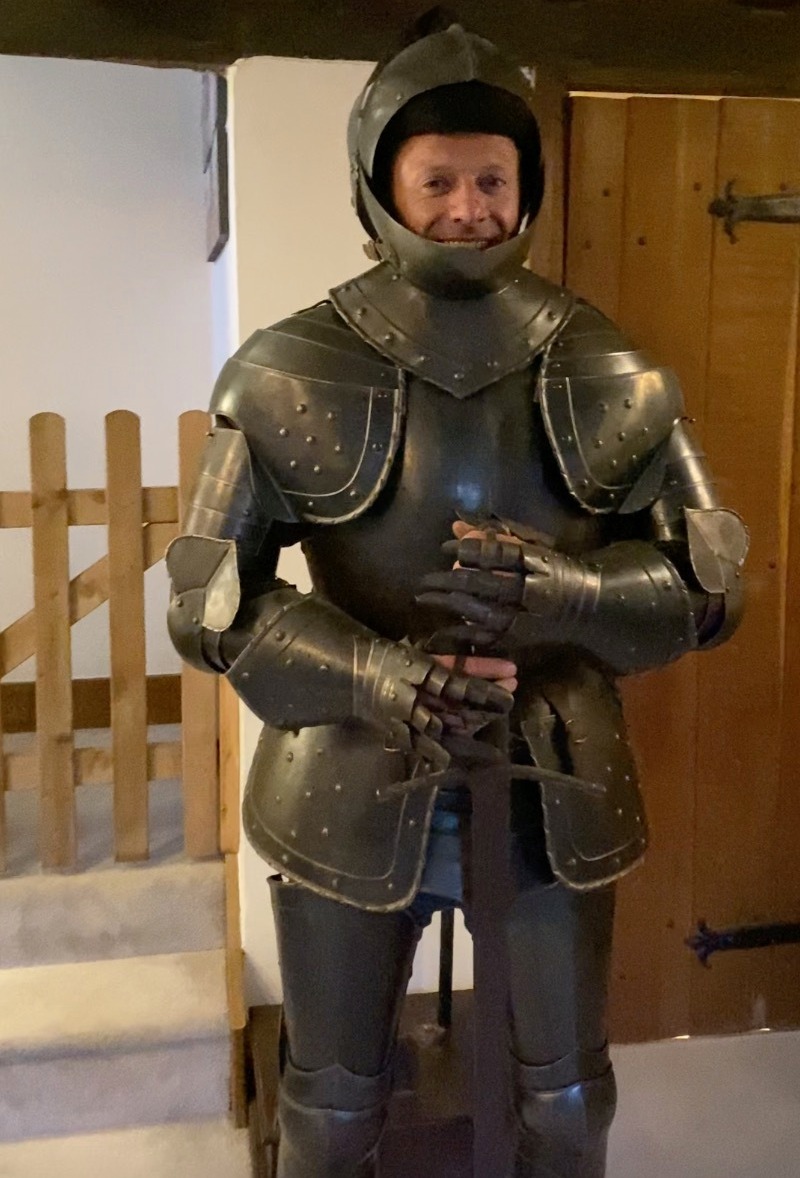 He pieced together the shining knight’s kit dubbed Sir Squeak-a-Lot by his two daughters, and it now guards their living room.

But wife Selina, 45, is horrified because she has to dust and clean it.

She explained: “It was a Saturday night and Dom had had a few beers and was a bit merry.

“He’d initially put in a stupid bid and didn’t expect to win but suddenly it was like, ‘You’ve won this auction.’ 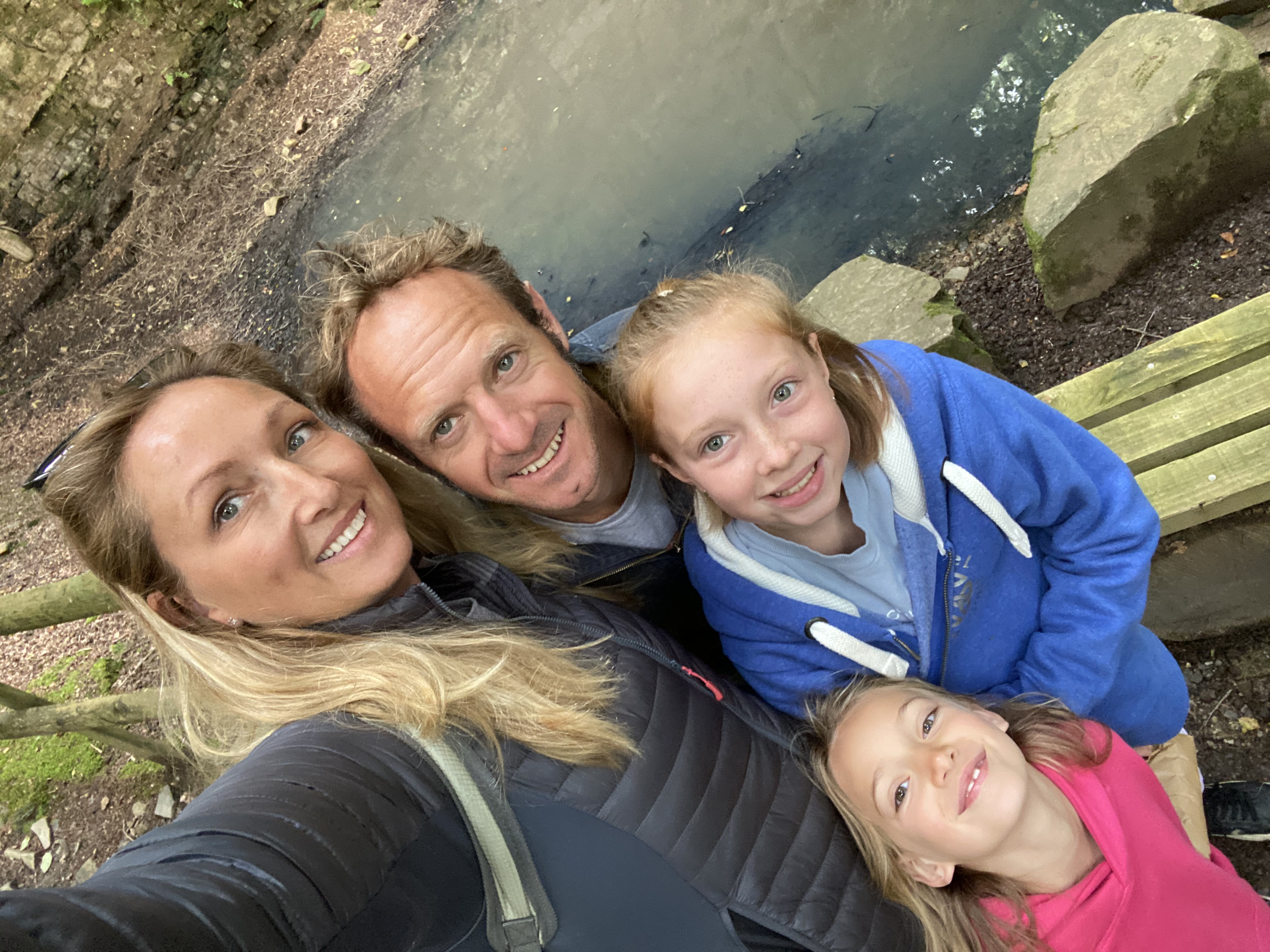 “Guys have certain things on their bucket lists and he’d always wanted a suit of armour. After he won he looked at me and his face just lit up. He was like a kid.”

Dom was inspired to own a suit of armour after a trip to the Netherlands when he was younger.

And the wish became even stronger when the couple moved to a 16th century cottage in Cromer, Herts, six years ago.

He drove the eight-hour, 400-mile round trip to Liverpool to collect the suit — returning with boxes of clanking metal. 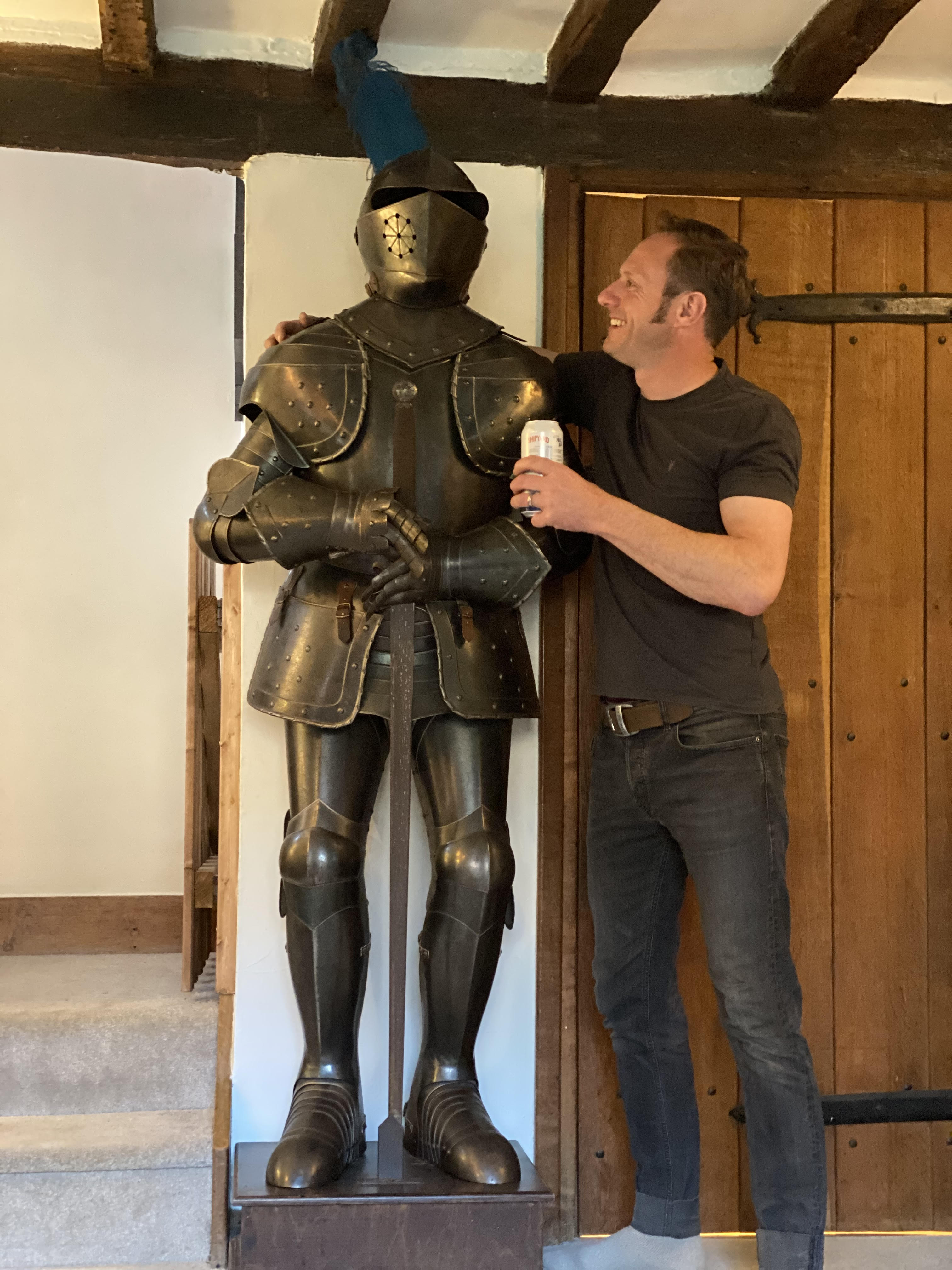 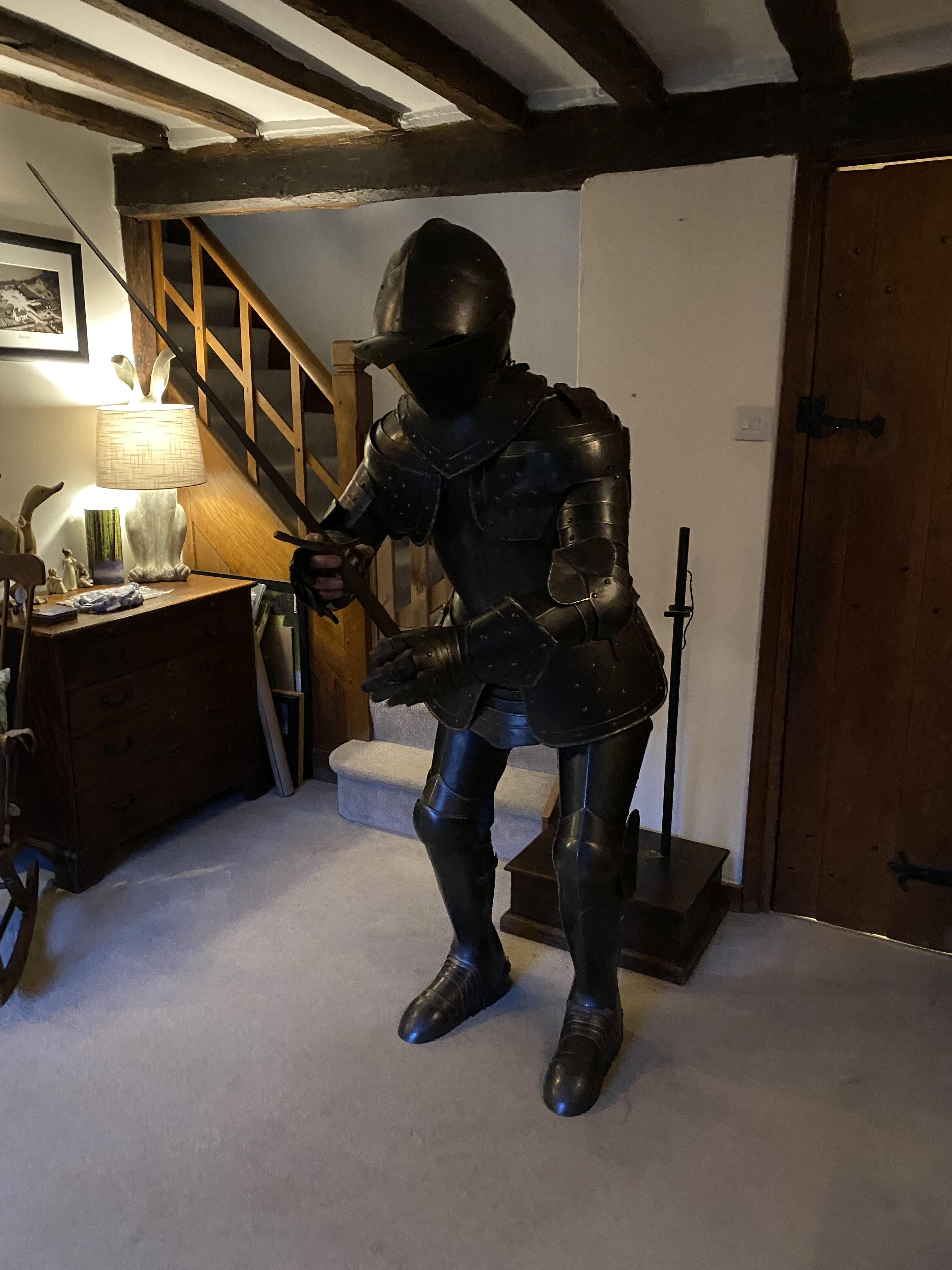 It is thought to be a 150-year-old reproduction of a suit worn on horseback by fighters.

Dom builds motorbikes for Royal Enfield so appreciates the work that has gone into the armour.

He said: “It’s always been on my bucket list. After sitting in a Dutch bar surrounded by armour I was tempted to walk out with one.”

Selina, his wife of eight years, added: “Honestly it was worth it just for the look on his face and then the reality hit of ‘Where the hell are we going to put this thing?’ Its weight is incredible. Dom’s quite lean and built like a whippet so he fits it all right.

“I don’t think many other people would be able to wear it.

“It was all in bits so putting it together was a big puzzle. We had to buy all the re-enactment extras, a padded gilet to fit underneath, and a headpiece.” 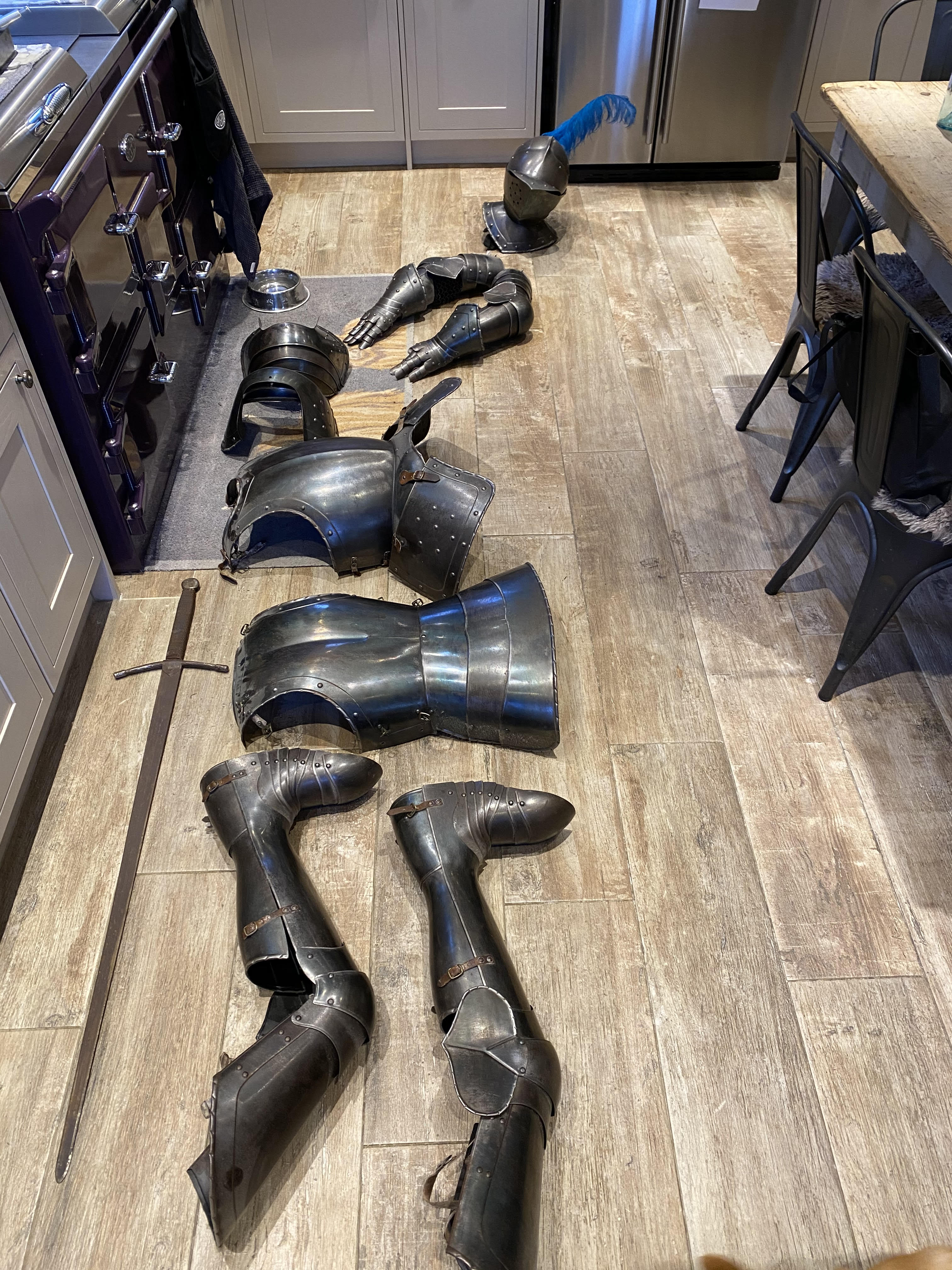 Selina jokingly turns in his feet to make it look like he needs the toilet.

She keeps him from seizing up with plenty of WD-40 and laughed: “It’s quite time-consuming to dust. I dread to think what’s lurking in there!” 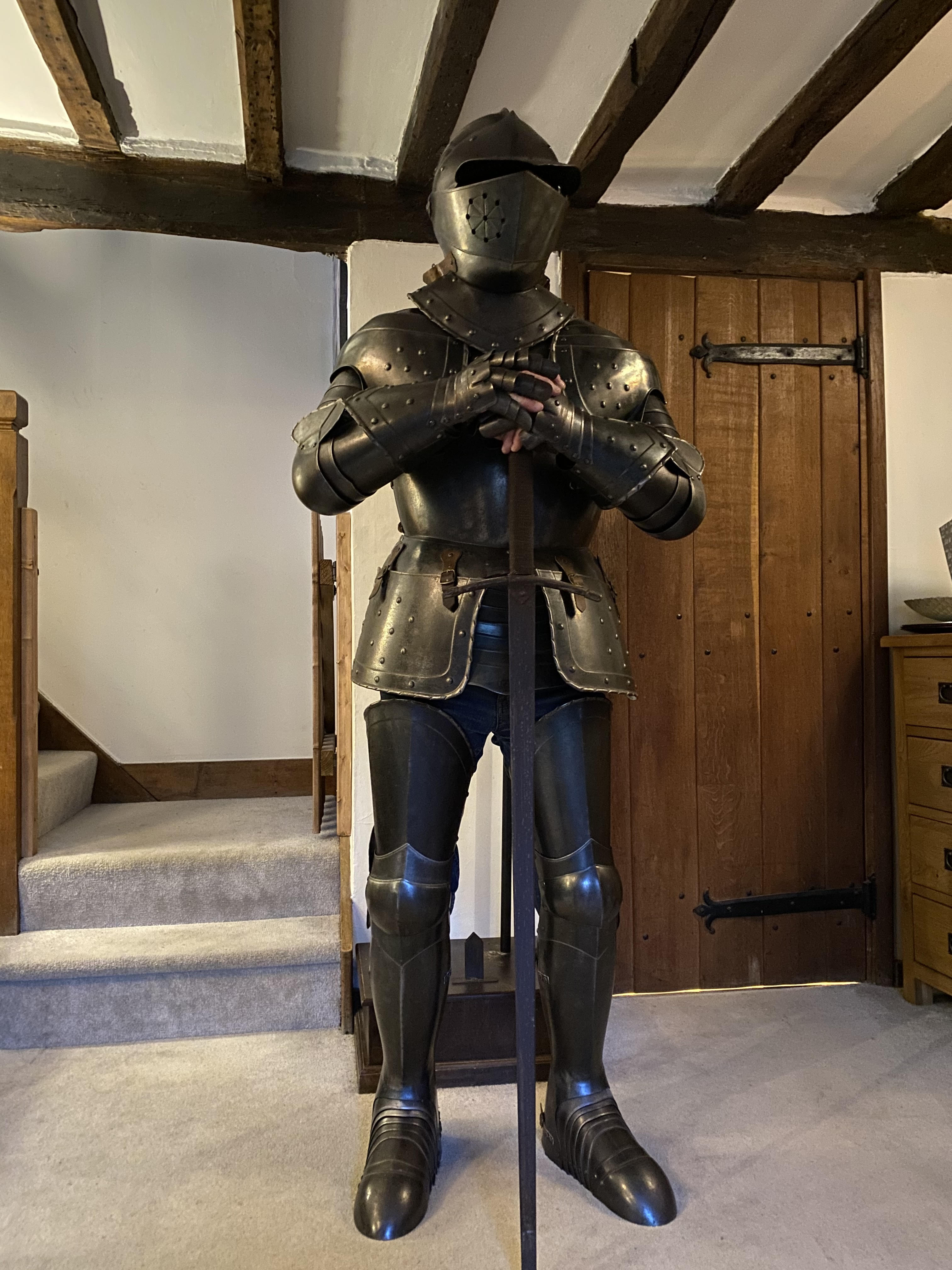