One year to the day since China announced first death caused by ‘mystery virus’ in Wuhan, the city boasts it is ‘the safest in the world’ as the rest of the planet is ravaged by Covid-19

One year ago, China announced the first death from a new virus in Wuhan – 12 months later, Covid-19 has claimed 1.9 million lives in an unrelenting march across the world.

But in the central Chinese city of 11 million where the first known outbreak started, the virus has been extinguished and residents are proud of its revival.

On Monday morning, the anniversary slipped by unmarked in Wuhan – commuters moved freely to work while parks and riverside promenades buzzed with walkers in a city determined to banish its tag as the coronavirus ground zero. 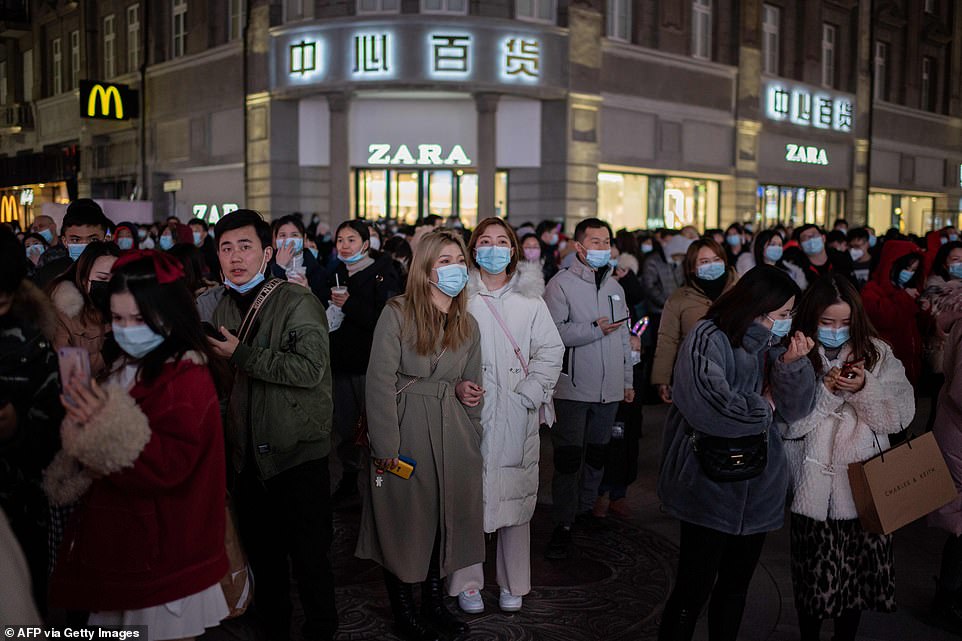 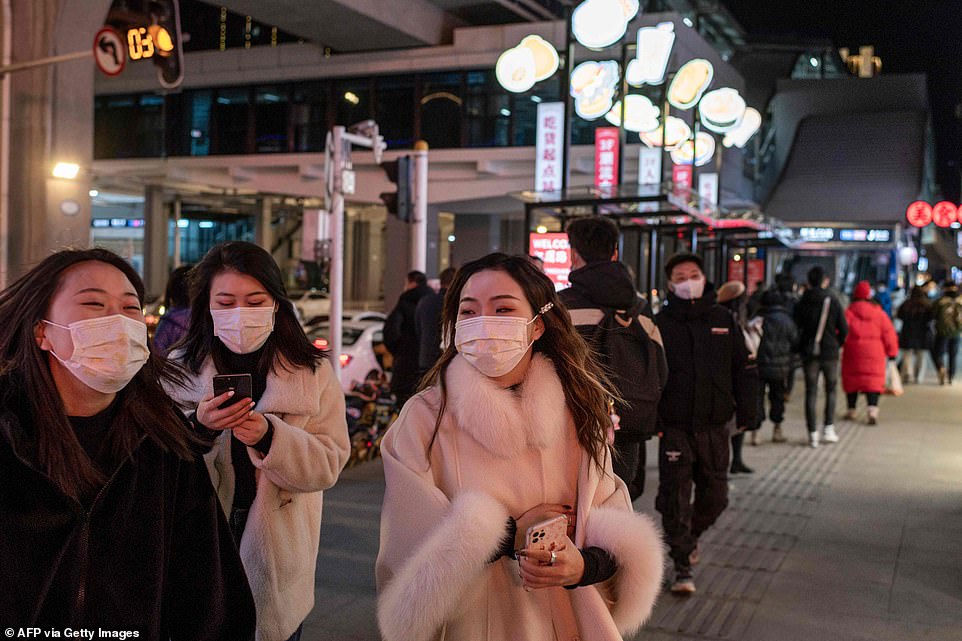 JAN 10 2021: A group of friends wearing face masks enjoy being outside together in Wuhan where the virus has now been extinguished

‘The Wuhan people’s awareness of epidemic prevention and control is very high — even my two-year-old grandson will wear a mask when going out,’ Xiong added.

But today, Wuhan was forced to shut its markets once again and launched a mass-testing campaign after two people from China’s new Covid-19 epicentre in the northern Hebei province near Beijing visited the city before testing positive, according to the Wuhan Municipal Health Commission.

The news comes as a year ago, in a sparse report, China confirmed its first death from an unknown virus – a 61-year-old man, a regular at the now-notorious Wuhan wet market, was linked to many of the early cases.

The world would soon become grimly familiar with the disease that killed him as Covid-19.

Little is still known about the first victim, including his name, while the market where the first reported clusters of cases were traced back to has remained closed, surrounded by boarding. 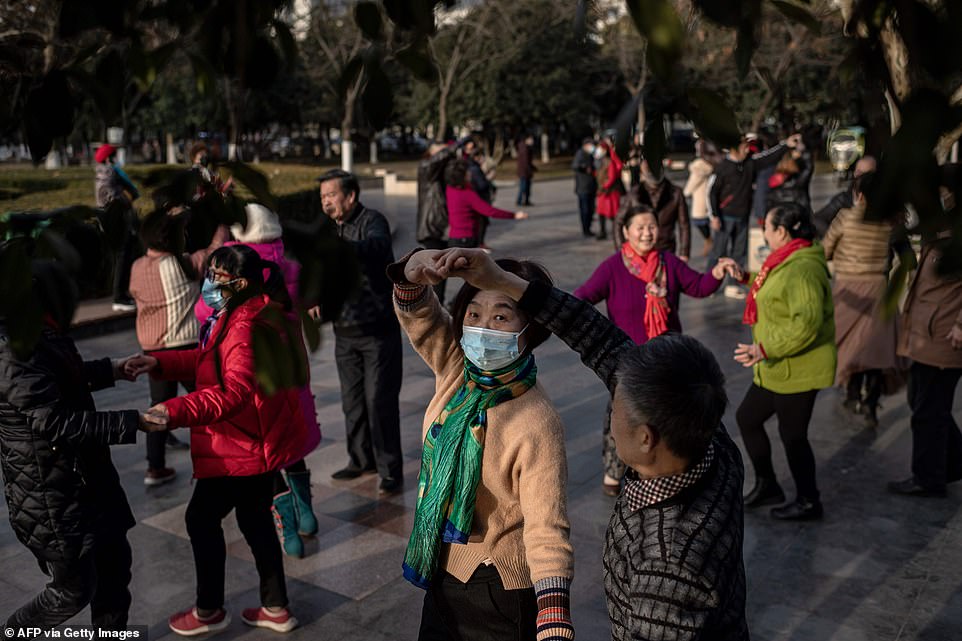 JAN 11 2021: Elderly couples danced, some masked, but hands clasped as social distancing withered in the winter sunshine in a busy park next to the Yangtze river 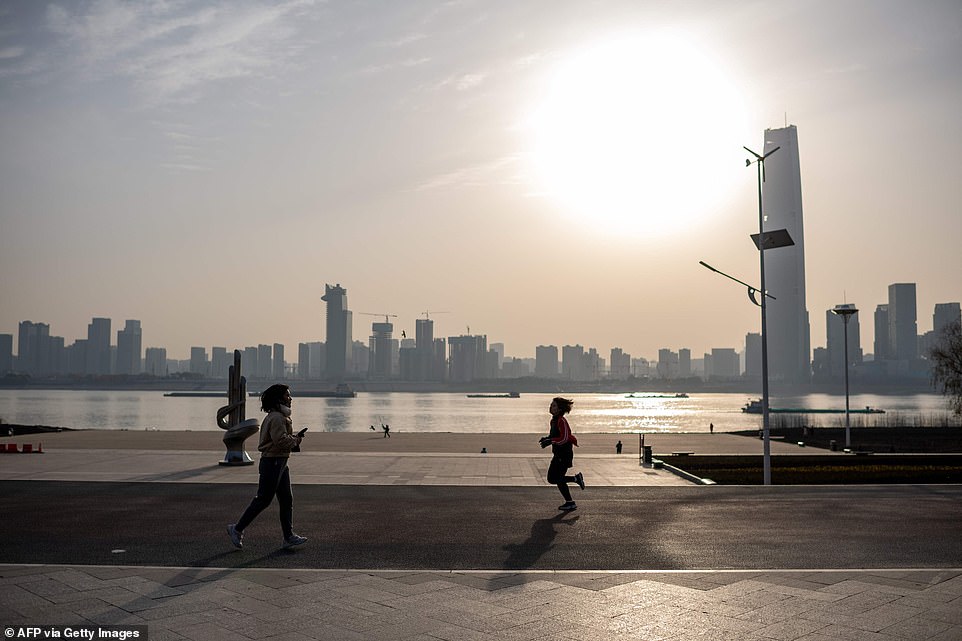 JAN 11 2021: On Monday morning, the anniversary slipped by unmarked in Wuhan – commuters moved freely to work while parks and riverside promenade by Yangtze River buzzed with runners

After a long wrangle, China on Monday said independent experts from the WHO will be allowed into the country from Thursday, with the international community hoping they can visit the market and retrace in detail those early days of the virus in Wuhan.

The city has now bounced back and residents are revelling in the freedoms they enjoy.

Commuters headed to work and others strolled along the riverfront – a sharp contrast to the countries still under strict lockdowns and restrictions.

Elderly couples danced, some masked, but hands clasped as social distancing withered in the winter sunshine in a busy park next to the Yangtze river.

‘Most cases in China are imported from overseas now and our country has a good control of it,’ said Zhong, an 80-year-old woman giving only one name.

‘All the Wuhan people feel very safe in the city, and we come here and dance happily everyday.’ 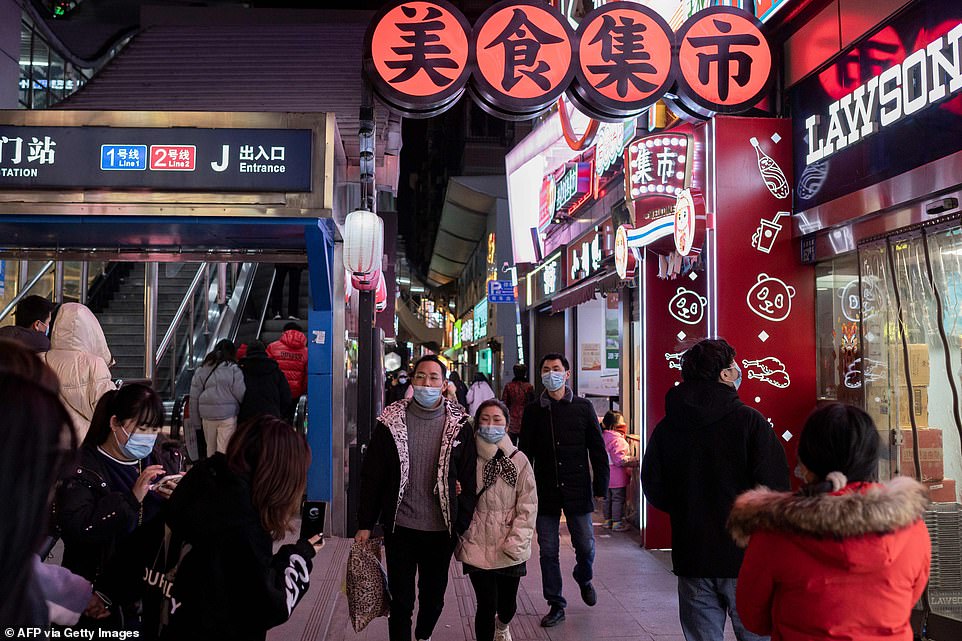 People, all wearing face masks, walk through the brightly lit streets of Wuhan as they enjoy shopping together 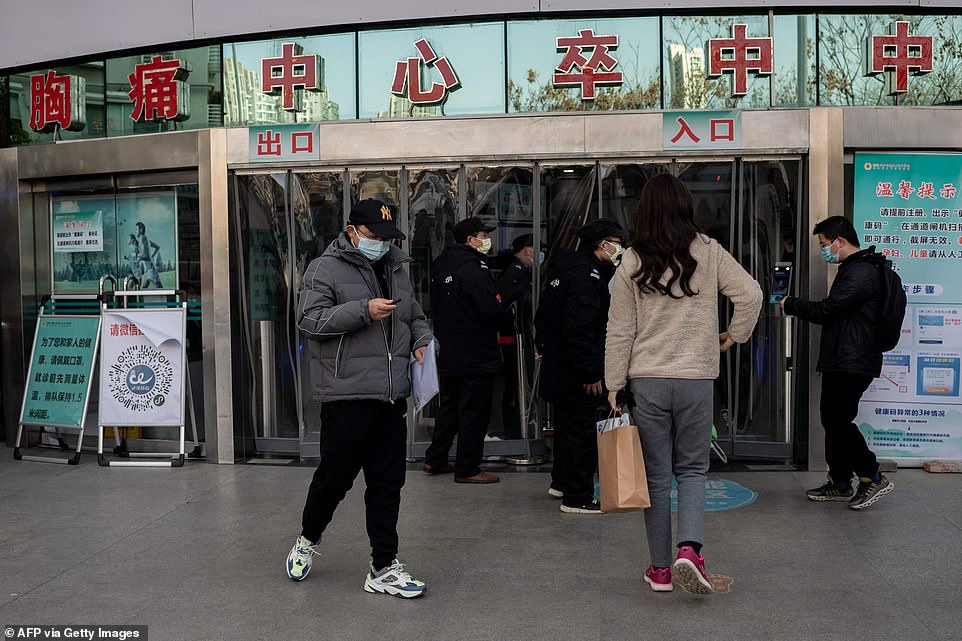 JAN 11 2021: People are pictured wearing face masks at the entrance of the Red Cross hospital in Wuhan 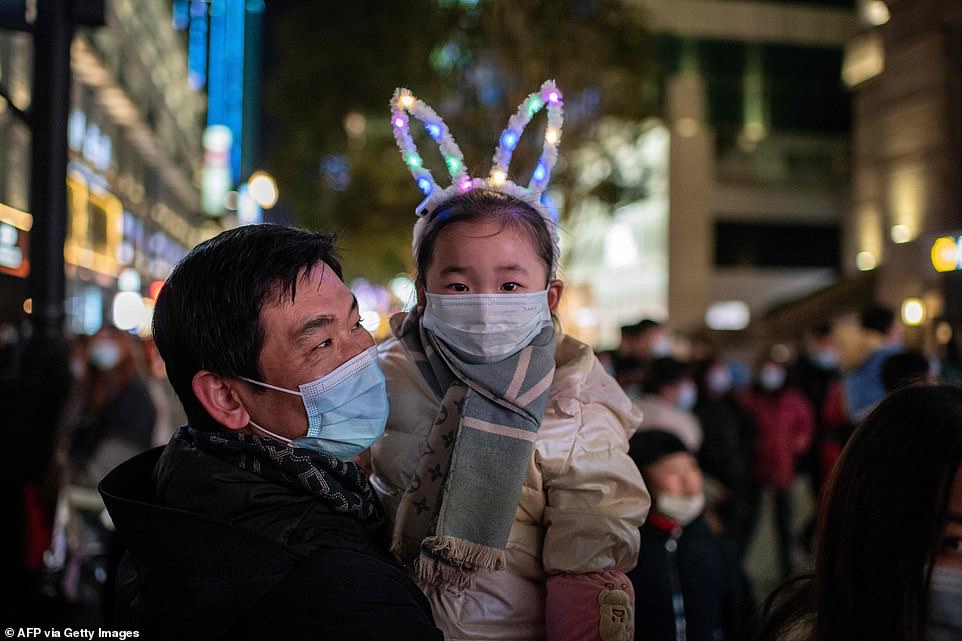 Jan 10 2021: A man holds a child as they wear face masks on Jianghan street in Wuhan on the eve of the first anniversary of China confirming its first death from Covid-19 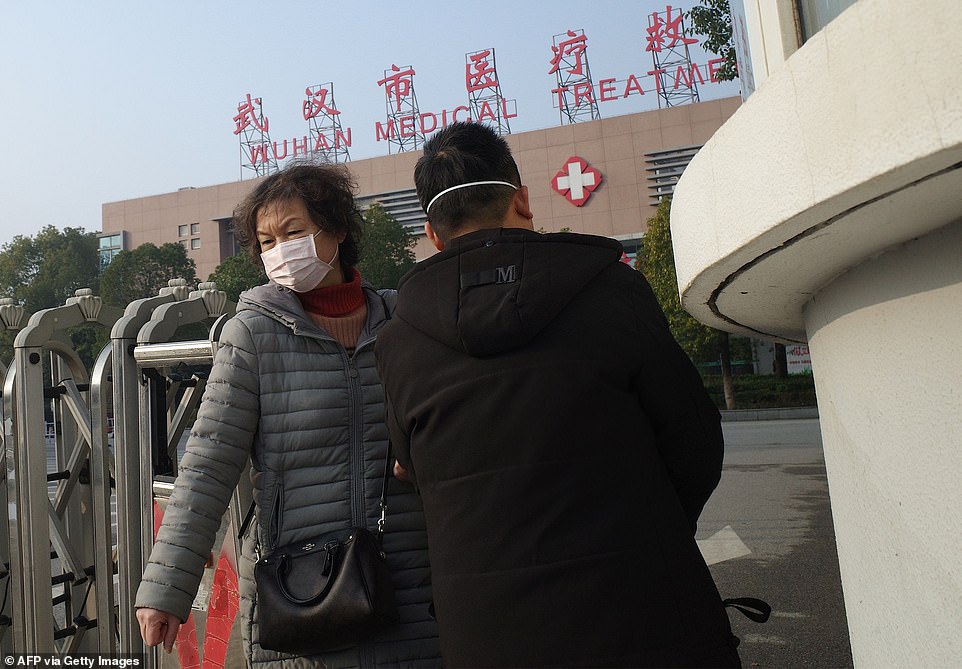 JAN 12 2020: A woman wears a face mask as she leaves the Wuhan Treatment centre where the first man to have tested positive from Covid-19 was confined 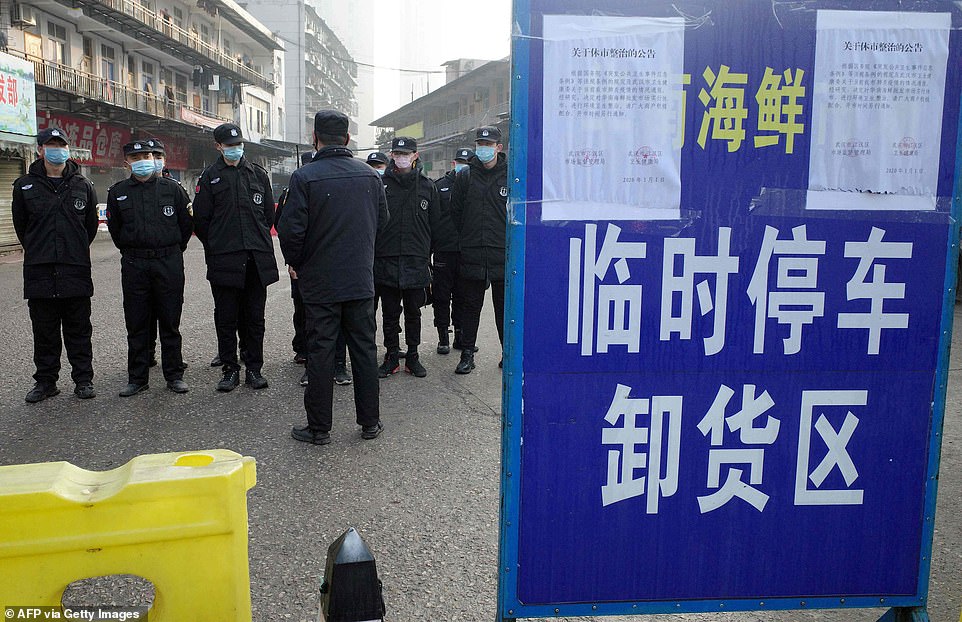 JAN 12 2020: Security guards stand in front of the closed Huanan wholesale seafood market, where health authorities said a man who died from coronavirus had purchased goods from the market

China has faced criticism at home and abroad over its initial handling of the virus, including attempts to silence whistleblowers and failure to report cases for days in early January.

Two weeks after confirming the first death, Wuhan and the surrounding province were put under lockdown.

Chinese authorities are trying to stamp out a series of local outbreaks, reporting 103 new infections on Monday — the highest figure since July last year – most in northern Hebei province.

China has said it is still negotiating with the World Health Organisation over the dates and itinerary for a visit by international experts looking into the origins of Covid-19.

It comes after the head of the agency criticised Beijing for not finalising permissions for the mission.

China’s position on the hunt for the origins of the pandemic ‘has always been open and responsible’, said Foreign Ministry spokesperson Hua Chunying.

She said that China is in close co-operation with the WHO. However, the dates and itinerary need to be finalised, she said.

‘The origins problem is very complex. To ensure that the work of the global experts group in China is successful and to carry out the necessary procedures and relevant concrete plans, currently both sides are still in negotiations on this,’ Ms Hua told a regular press briefing.

‘I understand that it’s not just a visa problem and the actual date and itinerary. Both sides are still in close communication.’

An international team of experts had been due to visit the central city of Wuhan in January, where the pandemic first appeared a year ago.

WHO director-general Tedros Adhanom Ghebreyesus said on Tuesday that members of the international scientific team began departing from their home countries over the last 24 hours as part of an arrangement between the WHO and the Chinese government.

‘Today, we learned that Chinese officials have not yet finalised the necessary permissions for the team’s arrival in China,’ Dr Tedros said during a news conference in Geneva.

‘I’m very disappointed with this news, given that two members had already begun their journeys and others were not able to travel at the last minute, but had been in contact with senior Chinese officials,’ he said.

The Chinese government has been strictly controlling all research at home into the origins of the virus, an Associated Press investigation found, and state-owned media have played up reports that suggest the virus could have originated elsewhere.

As a result, China sealed off two cities south of Beijing, cutting transport links and banning millions of residents from leaving, as authorities move to stem the country’s largest Covid-19 outbreak in six months.

Hebei province in northern China has seen 127 new Covid-19 cases, plus an additional 183 asymptomatic infections, in the past week.

The vast majority were found in Shijiazhuang, a city of several million in Hebei province whose surrounding areas take the total population to 11million. Nine confirmed cases were in the neighbouring city of Xingtai, whose area covers seven million people.

The surge comes as the World Health Organization’s team of investigators probing the origins of the COVID-19 pandemic are set to arrive in China on Thursday. The NHC, which announced their arrival date on Monday, declined to provide the team’s itinerary.

China has been accused of initially covering up the outbreak that first emerged in the central city of Wuhan in late 2019, which critics say delayed China’s initial response and allowed COVID-19 to spread globally.

Residents of Shijiazhuang and Xingtai – situated some 80 miles apart – were banned from leaving unless absolutely necessary, Hebei authorities announced on Friday.

The Chinese National Health Commission has reported 53 confirmed cases for Thursday, including 37 native patients and 16 imported infections. Among the local cases, 33 were detected in Hebei.

As of Friday noon, all of the district’s 673,787 residents had been tested and 511,219 swab samples had been analysed by labs, which found 259 positive cases, the city’s vice mayor Meng Xianghong said at a press briefing.

Mass-testing campaigns in Shijiazhuang’s other districts are still ongoing.

Officials vowed to ‘strictly control the movement of people and vehicles’, with all residential estates placed under ‘closed management’ – a euphemism for lockdown.

Hebei residents were also banned from entering Beijing or leaving the province unless absolutely necessary.

‘The outbreak was imported from abroad, but the exact origins are currently under in-depth investigation by state, provincial and municipal experts,’ said Li Qi, head of the Hebei Centre for Disease Control and Prevention, at a press briefing Friday.

Wangkui county, under the jurisdiction of Suihua city in Heilongjiang province, reported eight new asymptomatic cases and moved on Monday to close all non-essential businesses, banned people from leaving the city and blocked all non-essential traffic, state television also reported.

Each family in the county can have one person leave their home once every three days to buy necessities, the report said.

The residential compounds of the infected people were under lockdown, with people and vehicles not allowed to leave the premises, head of Changchun health authority told a press conference.

There are also mounting fears that travel plans for hundreds of millions of people for the Lunar New Year next month may be ruined as virus controls tighten.

Officials are starting to signal a low-key new-year holiday – which will run from February 11 to 17 – putting an end to the prospect of banquets, parties and public celebrations.

‘Mass celebrations, gatherings and fairs are forbidden,’ said Kang Sen, of Beijing’s agriculture and rural affairs authority, adding even funerals should be ‘brief’ and all public events would need prior approval.

His comments, carried over state media, appeared directed at villages in areas around the capital rather than the city itself.

But it the number of cases in China are a fraction of the daily infections in the United States, Britain and many European countries.