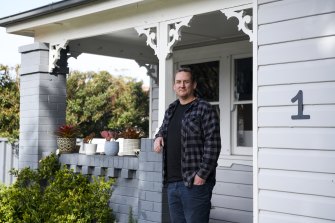 Wollongong-based Matt Castel used to book corporate getaways and honeymoons, but since the Australian border closed he has been helping Australians trapped overseas come home.Credit:Rhett Wyman

Since he and his Canada-based brother John switched their business to repatriation flights last year, the pair have helped bring thousands of people back to Australia, mainly from North America.

“It gives you a purpose,” he says. “Especially with the first year of how COVID went and staring down the barrel of closing my business.”

Mr Castel is just one of many travel agents who are going over and above to help Australians return home, and by default have become like first responders for stressed passengers each time a change in Australian border policy occurs.

Last week, when Prime Minister Scott Morrison announced the national cabinet’s decision to halve the number of people allowed to return to the country from July 14, Mr Castel was inundated with messages from his clients gripped by “absolute panic”.

“I had probably around 100 emails, very much the same basically, ‘what’s going to happen with my flight? Am I going to be bumped’?” he says.

“I’ve got a few people super nervous because they booked their pets to come back, they’ve put their furniture and their lives in shipping containers, taken the kids out of school – basically ready for a full move and now nervous that they’re not going to have a seat.”

Victoria Keating, an Australian-born travel agent in New Zealand, says she felt like she was “going to vomit” after the cap announcement, knowing what anguish it would cause her clients.

“I wanted to curl up in a ball on the floor … but instead I got on the phone,” she says.

Ms Keating had worked for months to organise what she has labelled an “Anzac” flight from South America to Australia next week to repatriate Australians and Kiwis. Her team spent hundreds of hours working to confirm enough passengers to convince the Chilean airline LATAM to put on a special flight for 150 people. 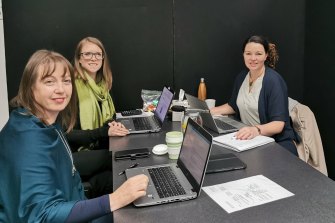 Such is the distress of their clients, Ms Keating’s repatriation team has undergone psychological first aid training.

“We get very invested in our travellers … you can’t help but feel their stories,” she says. “If you have someone go to an airport and try and board a flight, and they have Parkinson’s, and they’re in a wheelchair, and they’re 83 and they’ve been trying to get home for 16 months, and they get denied boarding – you just don’t sleep, you don’t eat.”

The flight carrying Australians who have been stranded in Chile, Colombia, Mexico, Uruguay, Ecuador, Brazil and Peru is due to arrive in Brisbane two hours before the cap comes into effect on Tuesday. Ms Keating wasn’t taking any chances and worked around the clock to make sure the flight went ahead.

Sydney-based agent Nicolas Delacharlerie, who has brought more than 100 passengers back to Australia, said he tried to stay as positive as possible for his clients but that the work had at times taken a toll on his own mental health.

“[Back in September] I was working almost 24/7 to the point that my partner almost broke up with me,” he said.

Despite the pressure of the job, Mr Delacharlerie said it was a “wonderful achievement” when he saw people make it home safely. His most memorable clients were an Australian-Pakistani family who needed to get to Sydney at short notice for their baby son’s urgent spinal surgery.

“The best part was the family came to see me after and I got to meet the little boy; he was adorable,” he said.

Similarly, Ms Keating says her team is “seriously considering” a trip to Australia to visit the people that she managed to get home.

All three agents say they’ve been flooded with messages of thanks and appreciation for their work, mainly via the Facebook groups where they connected with stranded Aussies. Despite the rise of online comparison websites for ticket sales, they say there’s a new appreciation for the skills and connections of a professional travel agent in these difficult pandemic trips.

Mr Castel says he heard about an Australian woman who unknowingly bought a ticket online months ago for a “ghost flight” with a small airline that isn’t actually running. She needs to get home by August and is now facing at least a $10,000 ticket.

“If she had asked someone for advice that knew, they would have said, ‘no, no way, don’t buy this flight they’re not operating’,” he said.

With international borders closed for at least another year, Mr Castel has his work is cut out for him – but he’s looking forward to the day he gets to book couples on overseas honeymoons again.

“Giving restaurant recommendations rather than just saying, ‘you need to get a PCR [COVID] test’, ‘fill out these forms and ’, ‘this is what to do if your flight gets cancelled’.