YouTube has removed a video of Tommy Robinson saying it breaches their hate speech policy, a report claims.

The short video was filmed for release in the event that Robinson was jailed for contempt of court, which he was on Thursday at the Old Bailey in London.

According to Cassandra Fairbanks, a reporter for the Gateway Pundit, YouTube notified her that they had removed the video – Tommy Robinson Message from Prison – ‘because it violates our hate speech policy.’

In the footage Robinson identified in court this week as Stephen Yaxley-Lennon, says: ‘So I’m in prison. For the crime of journalism. For exposing Muslim paedophile rapists. British journalists don’t seem bothered about this at all. They are puppets of the corporate, globalist media.’ 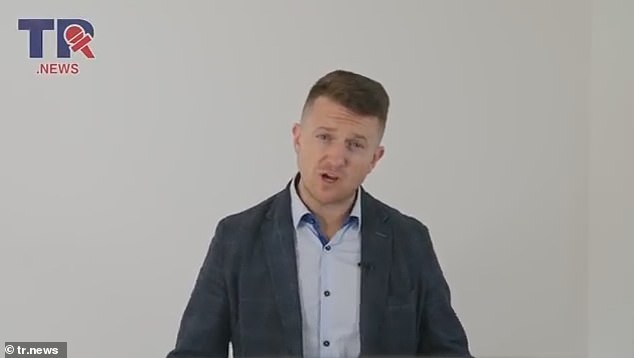 Tommy Robinson begins his short video by saying: ‘So I’m in prison. For the crime of journalism. For exposing Muslim paedophile rapists. British journalists don’t seem bothered about this at all’ 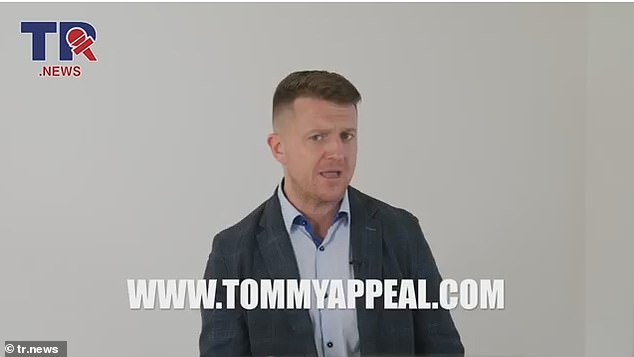 Robinson’s video was filmed prior to his sentencing on Thursday at the Old Bailey where he was given a nine month sentence, of which he will serve just nine-and-a-half weeks

The 36-year-old claims: ‘If this happened to vulnerable young Muslim girls, towns and cities all over Europe would become a warzone.’ 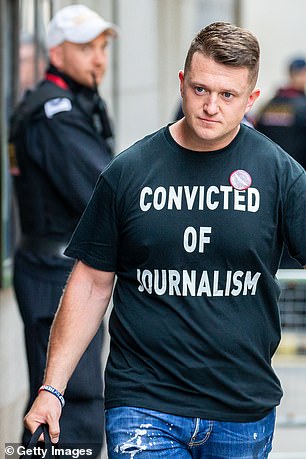 Robinson walking into the Old Bailey on Thursday ahead of sentencing

Beneath the video, which can be found on his official website, he writes: ‘Our politicians don’t want to listen. It’s time to MAKE them listen.’

Robinson, of Luton, Bedfordshire, was caged earlier this week in a nine-month sentence, of which he will serve just nine-and-a-half weeks.

Robinson was found in contempt in three respects when he filmed men accused of the sexual exploitation of young girls and live-streamed the footage on Facebook, in breach of a reporting ban, outside Leeds Crown Court in May 2018. 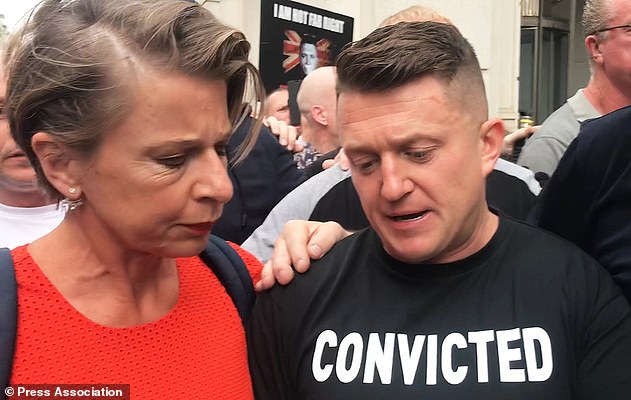 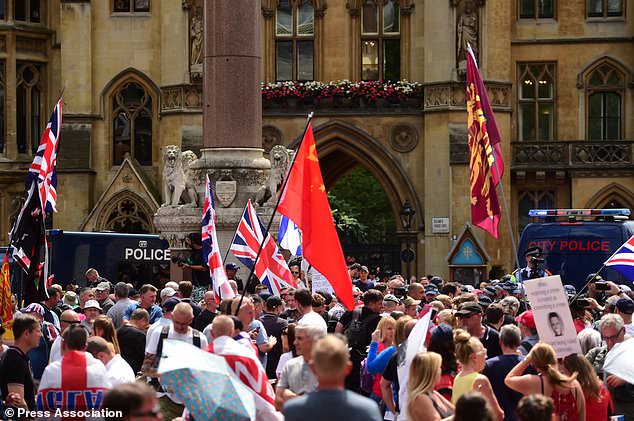 Dame Victoria Sharp, sitting with Mr Justice Warby, said the contempt committed by Robinson was not ‘deliberate defiance’ and he had not intended to ‘interfere with the administration of justice’.

Timeline of the Tommy Robinson contempt of court case

May 25, 2018: Robinson is jailed for 13 months for contempt of court after Facebook Live protest outside a trial in Leeds.

May 27, 2018: Sentence sparks protests in London including outside Downing Street.

August 1, 2018: Judges order his release and say he must face new hearing.

September 27, 2018: A new contempt of court case at the Old Bailey is adjourned after Judge Nicholas Hilliard QC asks for written submissions from all parties.

October 19, 2018: The Huddersfield grooming case is fully reported after the conclusion of all the trials.

October 23, 2018: After considering submissions, judge says case is ‘too complex’ and evidence must be considered by Attorney General.

March 7, 2019: Attorney General decides the case should be reheard.

May 14, 2019: High Court judges rule he will face new contempt of court proceedings

However, the judge said his conduct amounted to a ‘serious contempt’ and involved ‘reckless disobedience’ of an important court order, imposed to protect a trial and a later linked trial.

Dame Victoria and Mr Justice Warby concluded he committed contempt by breaching the reporting restriction imposed on the trial, by live-streaming the video from outside the public entrance to the court and by ‘aggressively confronting and filming’ some of the defendants.

Giving reasons for their findings on Tuesday, Dame Victoria said Robinson encouraged ‘vigilante action’ in the video, which lasted an hour-and-a-half and was viewed online 250,000 times on the morning of the broadcast.

His sentence was made up of six months for the Leeds contempt, plus three months for an earlier contempt committed at Canterbury Crown Court in 2017.

Dame Victoria told Robinson that the time he previously spent behind bars will be taken into account, reducing his sentence to 19 weeks – of which he will serve half before being released.

She said the purpose of sentencing for contempt was ‘punishment and deterrence’ and said the court was also ‘concerned to demonstrate its determination to uphold the rule of law’.

The judge added: ‘The respondent (Robinson) cannot be given credit for pleading guilty.

‘He has lied about a number of matters and sought to portray himself as the victim of unfairness and oppression.

‘This does not increase his sentence, but it does mean that there can be no reduction for an admission of guilt.’

She said the court took into consideration his 11 previous convictions, including for offences of violence, fraud and disobeying court orders, as well as the effect on him of his previous time in jail, his mental health and the impact of his incarceration on his family.

Supporters who had gathered outside court briefly clashed with police as the sentence was announced before marching to Parliament Square. 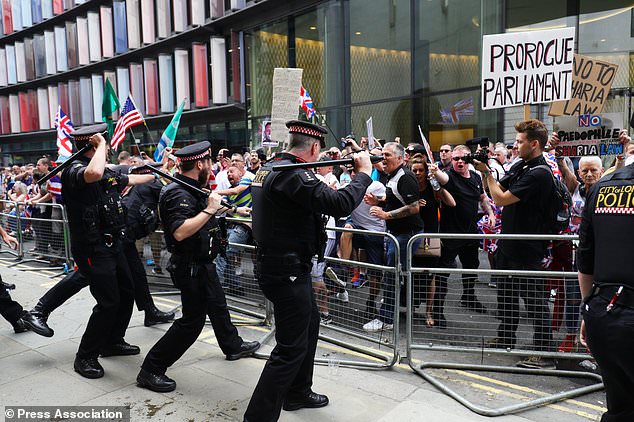 Why was Tommy Robinson jailed in May 2018?

Robinson was jailed after a judge at Leeds Crown Court found him in contempt of court in May.

The judge determined that Robinson’s broadcasting of a video online breached a court order which postponed any reporting of a trial until the conclusion of another, linked, trial. 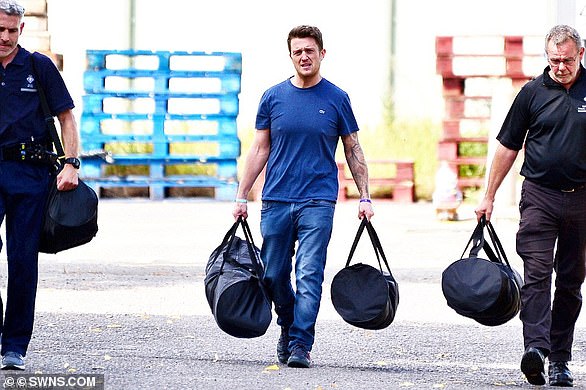 The anti-Islam campaigner was released from prison last year

He was jailed within five hours of the video being filmed and posted online.

He was previously given a suspended sentence for contempt at Canterbury Crown Court, when a judge told him it was likely he would go to prison if he engaged in similar conduct in future.

What is contempt of court?

Contempt of court law exists to ensure the fairness and integrity of criminal trials.

Where a judge believes there is a ‘substantial risk of serious prejudice’ to a defendant, an order may be made under the Contempt of Court Act which postpones the reporting of a trial until its conclusion.

When making such an order, a judge has to balance the interests of justice in a fair trial taking place with other interests – including free speech and open justice.

In most cases where someone is alleged to be in contempt of court, the matter will be referred to the Attorney General.